Warning: The topic and images below might be difficult or disturbing to some, especially those mourning the death of a loved one. 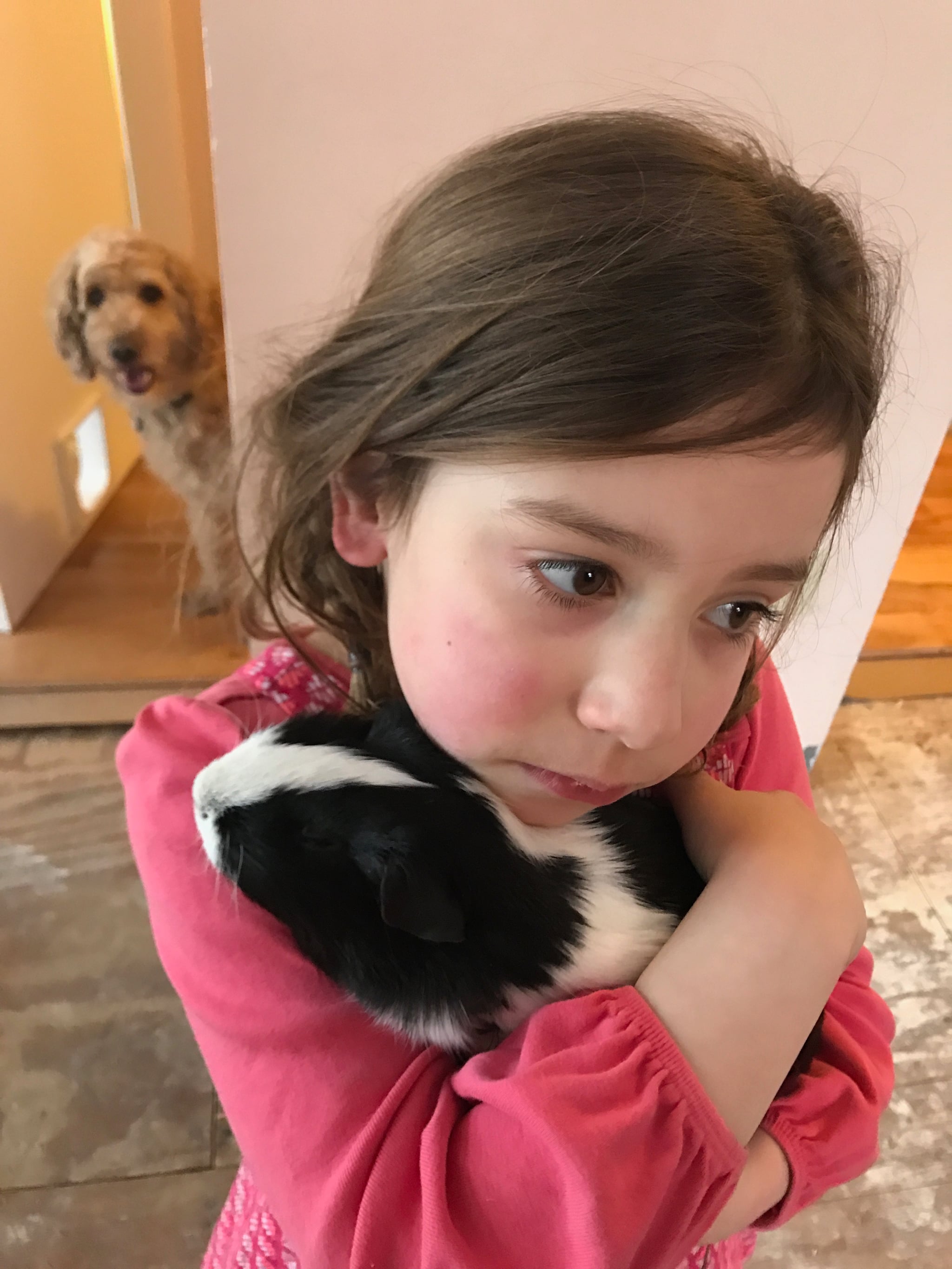 My daughter has definitely inherited my love for all living creatures. A 6-year-old self-proclaimed vegetarian, she tells people, "I don't want to hurt animals." And once, when picking her up from preschool, the teacher was a little nervous to tell me that Sadie found a dead snake on the playground and made a nest for it in a bucket, carried it around for an entire hour, and then made a sweet little burial ground for it, surrounded in stones and dandelions. Yep, sounds about right. That's my Sadie.

So when we went downstairs to feed our three guinea pigs, and I was the first to notice that Daisy had passed away, I knew Sadie would be as devastated as I was. I turned to her, voice crackly, my eyes welled up with tears and said, "Oh sweetie, I'm so sorry. Daisy has died."

Her reaction surprised me a little. No tears, no sadness. In a cheery voice, she said, "I want to hold her." I repeated myself because I felt like she didn't understand, "She isn't alive anymore. She died." But Sadie insisted, so I picked up her stiff body, and Sadie scooped her up in her arms, hugged her tight, and I just burst into tears at the sweet love she had for her.

I followed as Sadie carried her to the kitchen, grabbed a towel, and gently wrapped her in it, like a mother would do with her baby. It was really sweet. Daisy almost looked alive, with Sadie holding her. And Sadie carried her around FOR HOURS. She didn't want to let her go. It's what she wanted to do and what felt right to her as a way to remember Daisy's sweet body close to hers.

Even our dog, Reuben, was sad and wanted to give her kisses, but Sadie was the one who had the special connection with Daisy. My 4-year-old Devon asked, "Is she breathing?" and Sadie answered, "No, she took her last breath," so that made me feel better, that she kind of understood. Devon bent down, stroked Daisy's back and whispered, "I'll always love you, even though I'll never see you again." And . . . more crying from me.

It was hard enough that my husband was away on a business trip and missing all of this, but what made it worse was realizing that we had just gotten two feet of snow in the middle of March. There was no way we could bury Daisy next to our other guinea pig, Beep, and my bunny, Bean. Someone suggested we have Daisy cremated and the ashes put in a locket for Sadie to wear, but both kiddos thought that was the most horrible thing ever.

"I really want to bury her," Sadie said. So a vet friend suggested what they do at her office. To wrap Daisy up and put her in the freezer, so in a couple months, when the ground thaws, and the Spring flowers are blooming, we can have a proper burial. It seemed a little unsettling, to know Daisy would be in our freezer for at least a month, but it also felt kind of comforting, knowing we didn't have to say our final goodbyes just yet. 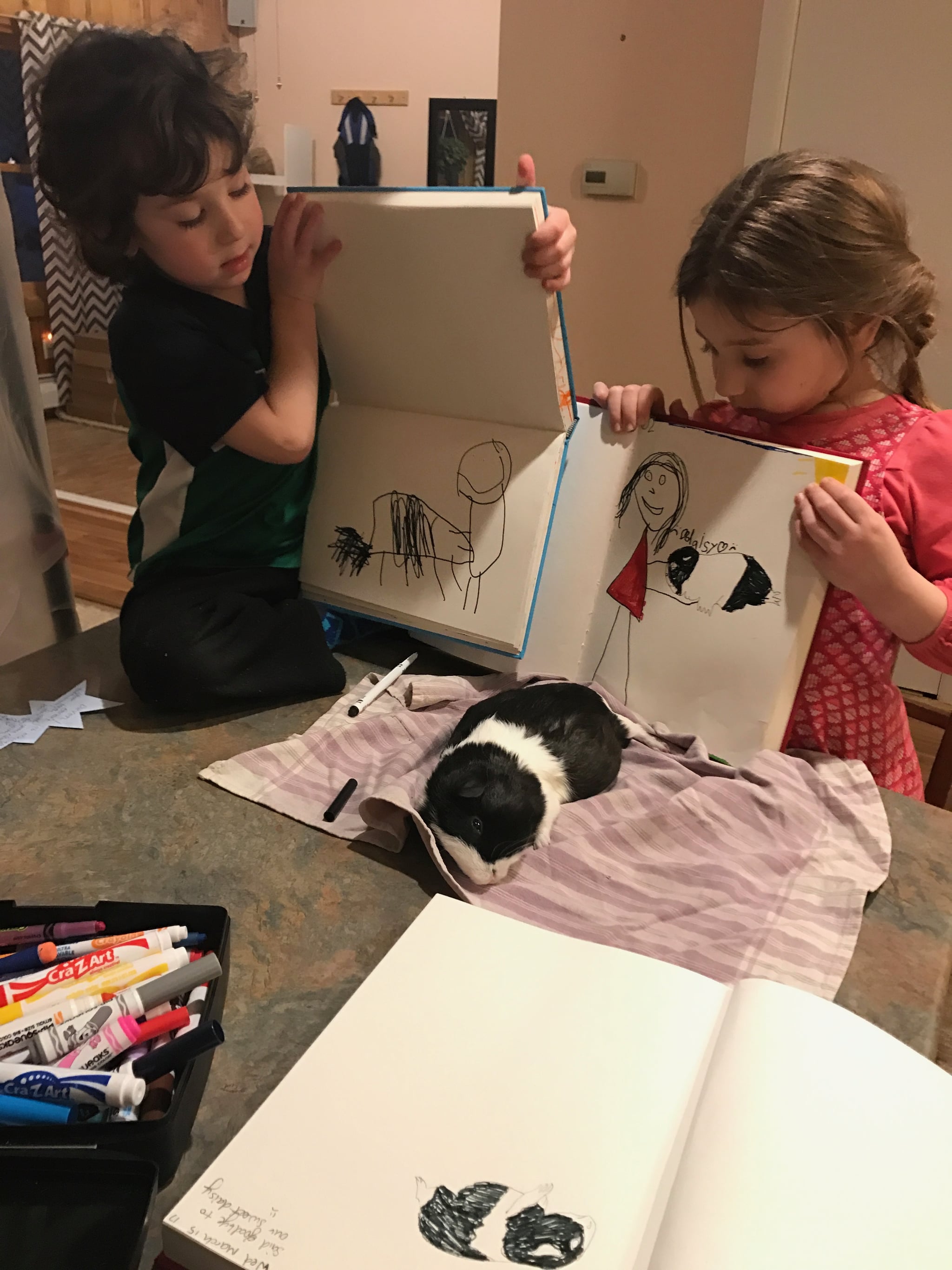 Sadie liked the idea of that. So I went to get a plastic baggie to put her in but Sadie wasn't ready, she said, "No, I want to draw a picture of her." We got out our journals and each colored a picture of Daisy. Sadie carefully drew Daisy's body, then drew herself with arms outstretched holding her, and Devon drew the same.

Then we were ready. We wrapped Daisy up in a purple blanket, Sadie said, "Because she's a girl and she'd like that." Sadie made a little card that said, "Daisy," and put it on the blanket inside the plastic bag, then pushed a chair over to the freezer because she wanted to put Daisy in herself. That's when I completely lost it. I just went over to my dog, hugged him tight, and cried in his fur.

The next day, Sadie told everyone at school what had happened. When she got off the bus, she pushed the chair over to the freezer and said, "I want to see her." Before I could object or warn her that Daisy would feel different, she was on the floor with Daisy on her lap, ready to open the baggie and take her out. I said, "No, sweetie!" But Sadie said, "I want to see her." And I said, "She won't look the same, you're not going to like what you see. You should just remember what she looks like in your heart." Thankfully Sadie agreed, hugged her, then put her back in the freezer.

That was it for Sadie. Still no tears, no sadness. And the next day, she didn't mention Daisy once. It actually made me feel a little better, knowing Sadie felt at peace with it all. Losing Daisy was such a hard thing because she wasn't just a guinea pig. She was part of our family, and she'll always have a special place in our hearts.

There are some great books to help kids deal with the death of a pet, but these two were especially helpful in explaining things and coping with all our feelings: Sally Goes to Heaven and I'll Always Love You. If you're going through the loss of a pet, know you're not alone, and that kids deal with death differently. Hopefully sharing our family's experience will help in some way. I know I already feel better.

Sex and the City
What Has And Just Like That Done to Miranda Hobbes?
by Njera Perkins 18 hours ago

Joe Biden
Biden's First Year in Office: A Look at What It's Meant For Families
by Kate Schweitzer 20 hours ago

by Kate Schweitzer 42 minutes ago