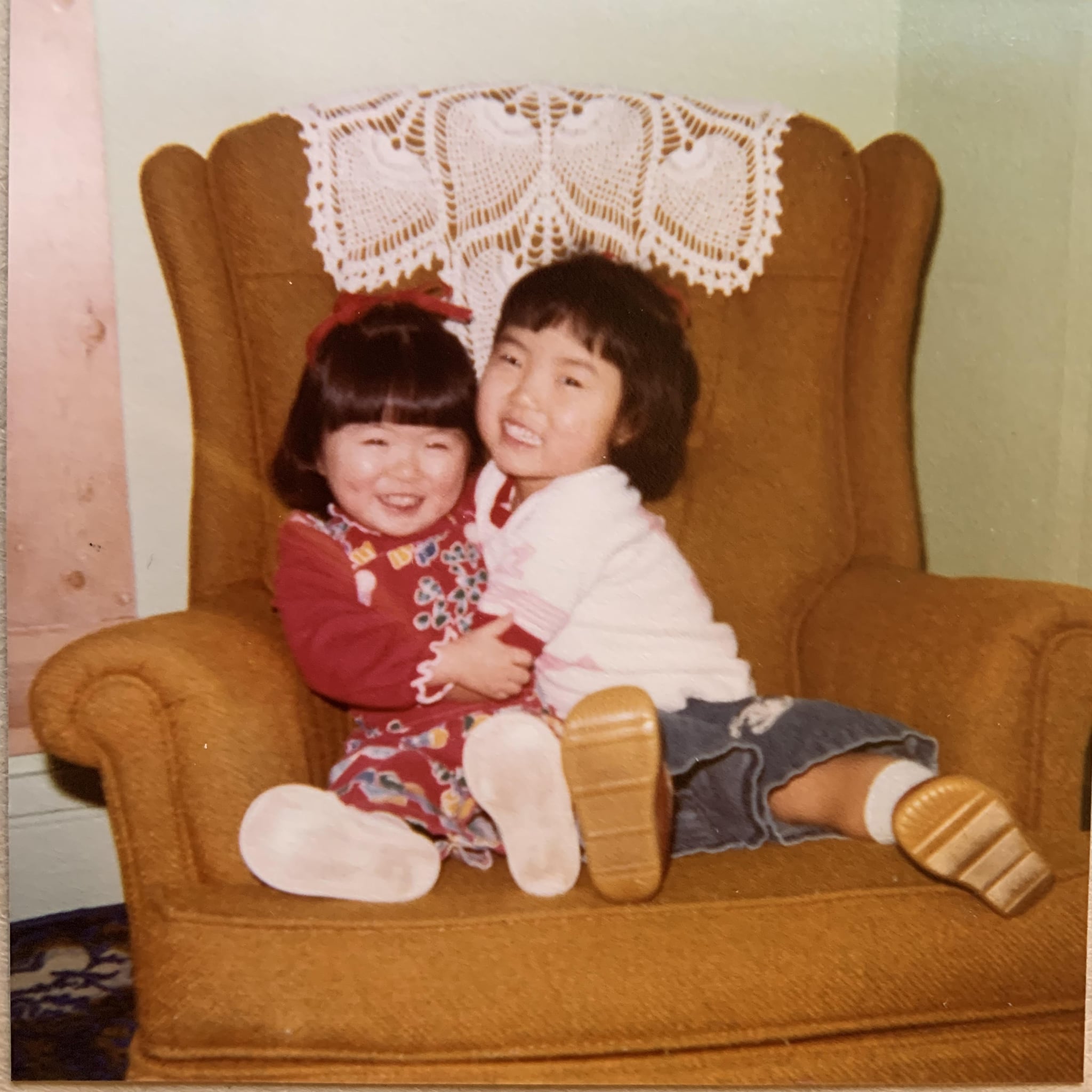 We have a photo taken at Halloween. All the kids are dressed up in costumes and masks. My sister and I are the easiest to pick out. Strawberry Shortcake and Cookie Monster: both masks have round eye cutouts with little crescent-shaped eyes smushed against them. No matter how much we tried to blend in, we were still Asian in a white world.

Growing up in rural Michigan, we always knew we were adopted. I mean, our entire family is white, so keeping that a secret wasn't an option. But we never knew for sure if we were biological sisters. That's what the adoption agency sold to my parents, and we were raised as sisters. Neither of us has memories telling us for sure, but I don't remember a life without her in it.

Related:
How Being a Transracial Adoptee Shaped — but Nearly Shattered — My Self-Identity

Our father was a single parent with two preteen sons when he and our mom said "I do." After a few years, they decided to expand their family with a set of Asian twin girls. This was the late '70s, and Korean babies were a thing. (South Korea's passage of the Special Adoption Law in 1976 made international adoptions in that country big business.) As it is with most popular things, there was a waiting list — a waiting list of 10 long years. That wasn't a line they felt comfortable queuing up for, so they did the next best thing: they queued up for a set of sisters only 15 months apart.

I remember peering at my sister's face from the front seat. It was as stoic a face as a 3-year-old could make.

Considering both of our parents have lived their entire lives within 50 miles of where they were born in northern Michigan, it's pretty surprising they would look for kids 6,500 miles away. When I asked about this, the answer was always, "Oriental babies are so cute." Of course, now we say "Asian babies," but the cuteness remains.

After about a year of waiting, our parents were informed we would soon be on our way to Michigan and that they should plan a trip to Detroit Metro Airport to give us a lift home. At the time, foreign adoptions did not require parents to visit the adoptees' home countries, so this would be our first meeting. I was 1 1/2, and my sister Sarah was 3.

It was January, so we were both bundled against the elements and loaded into dad's sedan: my brothers in back with my sister sandwiched in the middle and me in the front. (It was 1980, and car safety was more loosey-goosey.) My first memories are of this car ride and the moments immediately after. I remember peering at my sister's face from the front seat. It was as stoic a face as a 3-year-old could make.

Living in an unincorporated county of rural Michigan, there weren't many resources, so people depended on one another. Our arrival in this close-knit community was met with casseroles and Jell-O salads. Before we were old enough to attend the one-room schoolhouse down the road, our days were spent entertaining ourselves with dolls, books, and playing dress up.

My sister left for kindergarten a year before I did. I would see her off to the school bus every morning, and it was cause for a mini celebration every afternoon when she returned. Soon enough it was my turn to climb those giant school-bus steps. My introduction to school was pretty much out of a fairy tale. Our school was divided by bookshelves down the middle of its single room: grades K through five on one side and sixth through eighth on the other, with a grand total of 35 students and two teachers. The rules were simple: everyone had to help keep things tidy and be respectful, and there was absolutely no name-calling or swearing. My sis and I fit in seamlessly. But, like all fairy tales, it came to an end, and neither of us made it to the other side of those bookshelves. 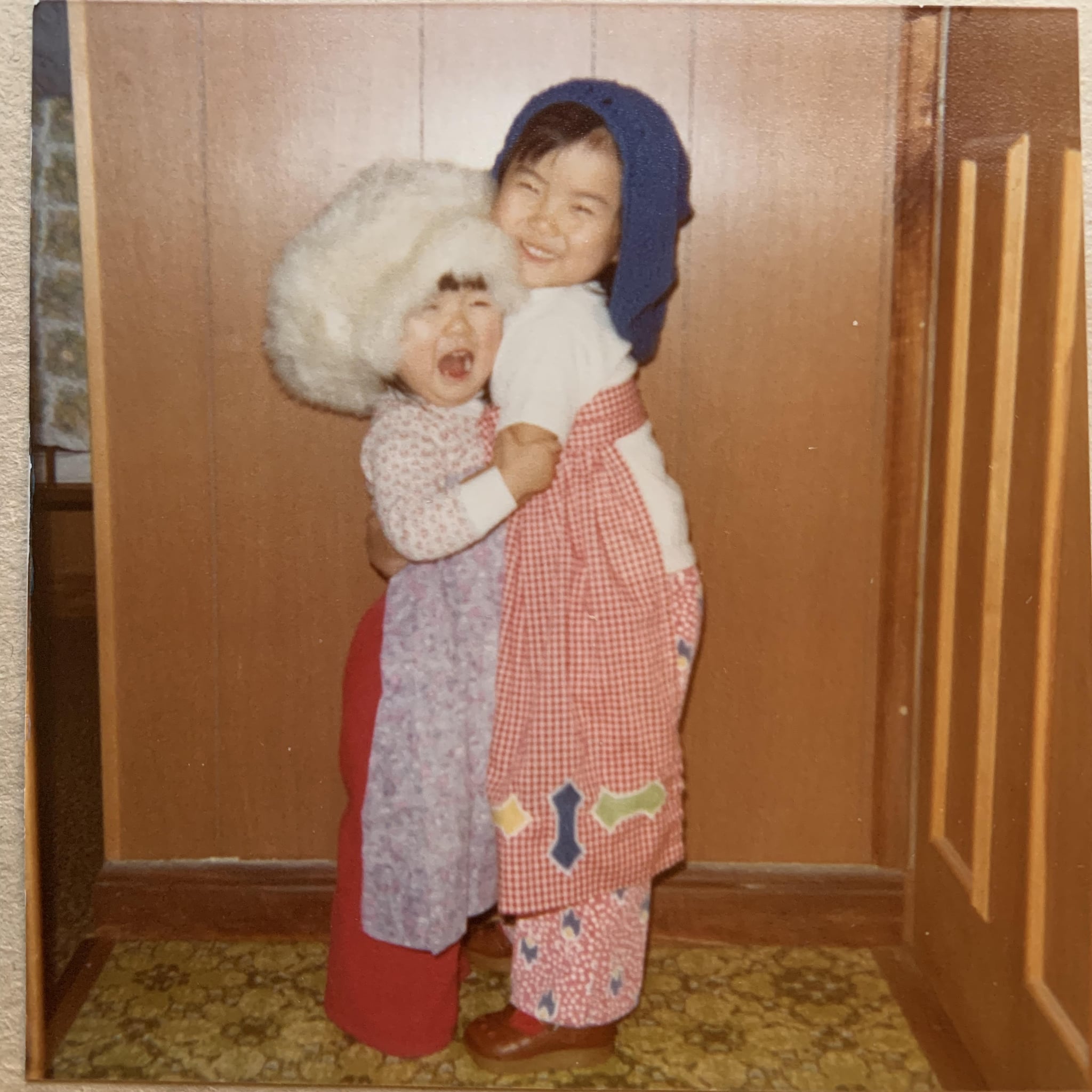 Our parents separated a few weeks after my 7th birthday. Mom packed my sister and me up, and we headed 30 miles away to the town where she was raised and where most of her family still lived. Our new town had a population of 2,185: 2,176 white, four Latinx, three black, and two Asian. We were the two Asians.

The first year was pretty tough. It was the first time we realized that looking different was something that was ridiculed, with pulling of eyes, bucking of teeth, and hurling of racial slurs I didn't understand but knew weren't right. Up until the first day at our new school, we had only experienced positive reactions from being Asian. We were the cute girls, dammit! Didn't these kids get it? Unfortunately, they did not.

Initially, we didn't talk about it, but as we got older it would come up in conversation occasionally. But for the most part, we suffered silently, more concerned with typical preteen squabbles over having to share things like Aqua Net.

During my junior year of high school, my sister left for college. When she moved out, I knew I was alone. I felt very alone and disconnected from my family, so I moved in with my best friend's family to finish out high school. It was around that time that we started to suspect that we might not actually be biological sisters. Though we have vaguely similar features, we looked different enough that we started to doubt our origin story. We would always reassure each other that no matter what, we were sisters, and no one and nothing could ever take that away. But deep down, as much as I hated sharing Aqua Net, I wanted to share genes.

It was around that time that we started to suspect that we might not actually be biological sisters.

In 1997 my sister moved to San Francisco, and though I was happy for her, it was the first time we wouldn't be within driving distance of each other. We talked on the phone occasionally, but I missed her. Within three months, I found myself on her couch, and soon we were roommates. On our nights in, we would pop open a bottle of the corner store's finest red under $10 and imagine what our lives would've been like had we not been adopted. We wondered what our biological parents were like, who looked like who. We dreamed of one day making a trip to Korea and trying to find our birth parents. We rarely traveled back to Michigan anymore and instead spent holidays together or with friends. Being with my sister was all I needed.

My sister eventually moved in with her boyfriend, so naturally we saw less of each other. A couple of years into her relationship, she traveled with her boyfriend to the East Coast for Christmas. I've never been a big holiday person, so I made plans with a friend to go see The Lord of the Rings in the theater. At about the time Frodo sets off for Mordor, I started feeling extremely uneasy, an overwhelming sense of anxiety, so palpable that my friend asked if I was OK. I settled down, finished the movie, and — in a fleeting moment — considered calling my sister.

A couple of days went by, and she called to let me know she had been hospitalized with appendicitis and had to have emergency surgery. We compared notes and realized that the moment she was told her appendix had to come out was around the same time I had my movie theater freakout. After that, my doubts about our biological sisterhood began to fade.

In our mid-30s, we both moved to New York City and again found ourselves sharing an apartment for a short while. By this time, my sister was in a relationship with her future husband and talking about having biological children. Because we were adopted, we have no record of our family medical history. Every time I've gone in for anything medical-related, there's that form that asks if you or your family has had any of hundreds of ailments; I can only speak for myself. It's something I've always been curious about. I would think back to the heredity chapters in middle school science class, where kids mapped out recessive and dominant genes. I just used the sample family.

I would think back to the heredity chapters in middle school science class, where kids mapped out recessive and dominant genes. I just used the sample family.

Shortly after my sister had her first child, 23andMe received approval to provide a more detailed look at DNA, so we decided to order our kits. We reassured each other that we were sisters no matter what. The tests told us what we already suspected: we are biological sisters. That's when we began to talk in earnest about going to Korea.

Throughout my adult years, I had made various attempts to gain information regarding our history and any surviving family members. Although these searches were fruitless, they did give us a starting point in Korea, so off we went with our perfect English and our Western fashion sense. We were lucky enough to have a wonderful interpreter who helped guide us through the orphanage where we lived as babies for almost a year. That afternoon, we learned that in the 1970s, orphanages and the souls running them were completely overwhelmed. There was very little funding, and records were kept as best they could. Though we didn't receive any life-changing news, we did leave a DNA sample should someone ever want to find us. We spent the remaining time eating and shopping and not being mistaken for native Koreans.

Though I'm a nurturing person, I've never really imagined myself as a mother. My sister always wanted to be a mom, but I never thought of my sister as being particularly motherly either.

Now, seeing her with her three children, I realize how wrong I was: she's been motherly her whole life. She watched over me as we sat on our little blanket under a streetlamp in Korea, waiting to be found. She was that brave 3-year-old sitting in the backseat, keeping watch over her little sister, surrounded by strangers speaking a language she didn't know. She's the mom who finds the energy to play with her kids and who finds the patience to discipline them in a calm fashion. I look at my nieces and nephews, and I realize my sister has given me the best gift in the world: three little people to love unconditionally. I cannot wait to see their little crescent-shaped eyes smushed against the Halloween masks of their choice.