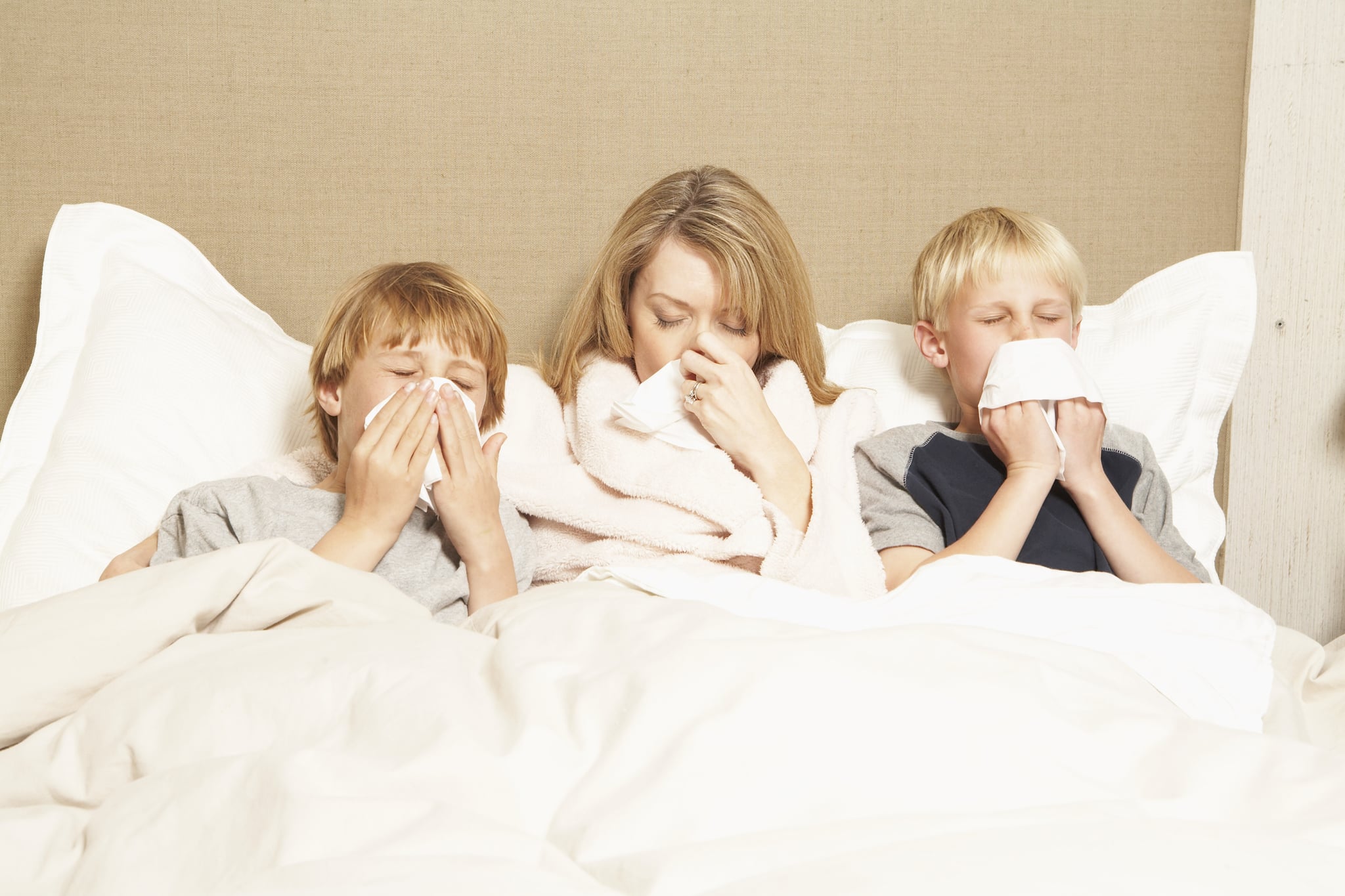 I used to enjoy it, just a little, when my first baby got sick. She changed. She slowed down. She wanted to be held for more than two seconds. She'd sit in my lap and just, well, sit. I didn't have to think of things to do, and I didn't have to chase her. She craved her nap, she didn't protest her crib, and life got downright peaceful. During her first year, we survived the colds without a high fever or upset stomach. I thought my child was simply and robustly healthy. It was her perfect diet and exercise regimen, I knew. I didn't know how good I had it.

Her second year, we started day care. She had a cold the first week. And every week after that. They didn't seem to bother her that much, but between teething and coughing at night, followed by the onset of the Winter viruses, her first big fever, her first big stomach bug, and so on, we developed a new pattern. When she got sick, we'd nurse her through it, and just as she'd turn the corner, one or both of us would wind up with the virus. It felt unfair, but that was our second Winter. We were optimistic. Everyone told us that after a year of day care, our kid would get sick a lot less, if at all. And that was about half true — every Winter, there are new viruses to catch. Any clearance we'd gained we wiped out by having a fresh kid, another new immune system. The new baby was protected enough the first year, being mostly home and with a sitter. She didn't seem bowled over by the ick my older child brought home from school. But now Kid 2 is in day care. The current state of affairs? We are basically all sick all the time. Or, it sure seems that way.

We still tell horror stories from the Winter of 2014, which was beyond cold. We were always indoors, and yet we had made it all the way to the February break without any major bouts of flu or fever. I remember thinking we'd made it out. We were free. Except in Buffalo, NY, March is also Winter. My daughter got a stomach bug upon returning from break, the kind where you can't keep anything down. Or in. My husband had just gotten a Fitbit, and I remember it told him the first night — when he was trying to manage puking and buckets and soiled sheets and trips to the bathroom — that he got up 23 times. You bet we both got that bug. I can't remember how we survived, but we were grateful to have a flexible, brave sitter who quarantined the baby for a day while we voided our stomachs.

Luckily, kids are resilient; they seem to plow through illnesses, and even better, they don't take them personally. When sick, my daughter is pretty willing to spend a day on the couch or in bed with books and Internet radio and Curious George, and then she gets on her feet and goes back to school. Her parents, on the other hand, are not so forgiving. While I've long gotten past blaming other people's germs (or kids) for infection, that doesn't mean I don't still blame the gods, Winter, the science museum, or our own bad luck. There's the extraspecial dread of knowing you will get what your kid has. We bemoan our loss of so-called productivity and stumble around trying to keep the house going. That's the unfortunate part . . . Mom can be sick, but there are things that moms do — following toddlers, feeding children, procuring foodstuffs, and getting medical help — that don't allow for sick days. It's a very physical job. Not to mention working after you've spent time off caring for sick kids.

I confess I haven't developed any special method for beating the kid-world ailments — with two kids, it gets quite tricky and definitely exhausting to feel below functional and make it through the week. I no longer believe in miracle remedies or health foods. I believe in saline drops, fresh foods, tons of water, Ibuprofen, hand washing, and trading off naps with your partner or going to bed very early. But I think I have gained a measure of patience with the whole cycle after five Winters — the worst is seasonal, the bugs come, and then they go. Flu shots help. Spring arrives.

Acne
After a Decade of Agonizing Over My Bacne, I'm Finally Learning to Accept the Skin I'm In
by Krista Jones 1 day ago

Acne
I Stopped Wearing Makeup While Sheltering in Place, but My Breakouts Only Got Worse
by Samantha Sasso 2 days ago

Acne
I've Tried $673 Worth of Acne Products, and Here's What Finally Worked
by Samantha Sasso 2 days ago