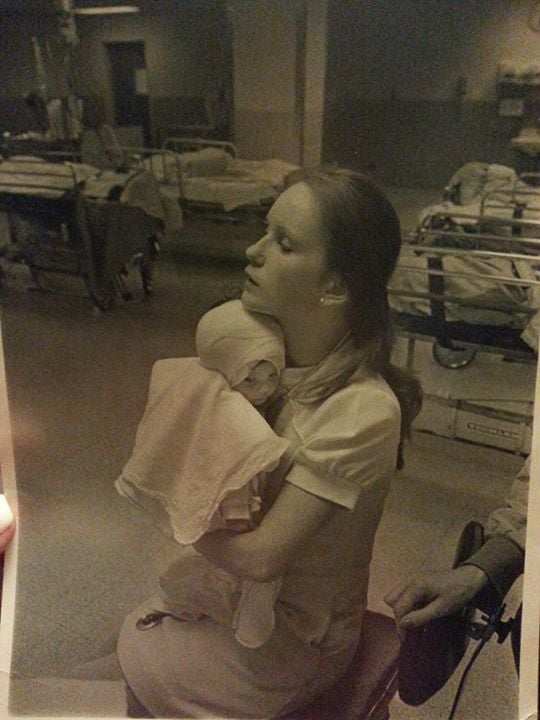 When Amanda Scarpinati was an infant, she suffered severe third-degree burns after rolling off her couch and onto a running humidifier. Albany Medical Center's 1977 annual report included photos of Amanda with the unnamed nurse who held and cared for her, and now as an adult she's set out to find the woman whose photo she has cherished — and spoken to for comfort through years of being bullied — for nearly four decades.

Though Amanda has started this search before — 20 years ago, with no luck — the power of social media was definitely at play this time around. In a post to Facebook, Amanda asked her friends to share the photos of her with the then-21-year-old nurse, in hopes of someone recognizing her so that the two could meet again.

Just a day after the original post went up on her page, Amanda posted again, informing friends with a photo that she may have a lead, "Thank you a million times over to every single person who has taken the time to help. Next step is to try to find Susan and have her confirm that it is indeed her. #DesperatelySeekingSusan."

The following day, the lead was confirmed, and Susan Berger — now in her late 50s and director of health services at Cazenovia College — and Amanda were connected. "I had the amazing pleasure to speak with Sue Berger this evening. She's just as sweet and caring as I could have imagined her to be," Amanda said.

The two finally got the opportunity to meet, in front of a crowd at Albany Medical Center, where this all began 38 years ago. Amanda, who "never thought this day would come," shared an emotional exchange with the nurse who unknowingly played such a huge role in her life. Susan was completely taken by Amanda: "I don't know how many nurses would be lucky enough to have something like this happen, to have someone remember you [after] all that time. I feel privileged . . . "

Family Life
After Having a Debilitating Stroke at 26, This Mom Is Truly Living Life "Unafraid"
by Murphy Moroney 4 days ago

Little Kids
After Seeing a Moving Note Outside a Family's House, a Delivery Woman Took a Moment to Pray
by Murphy Moroney 2 days ago