Bring on March 2, because we know exactly where we'll be: on the couch, with popcorn, watching the pilot of Breeders, a new TV show about relatable parenting struggles from FX. Starring Martin Freeman (Love Actually, The Hobbit: An Unexpected Journey) and Daisy Haggard (Harry Potter and the Deathly Hallows: Part 1), Breeders follows the life of married couple Paul and Ally and their two kids, Luke and Ava, who may or may not be the best and worst things that ever happened to them. Sound familiar?

Not only does the show's overall concept hit pretty close to home for any parent, but the lines in season one are so relatable, we can't help but laugh (mostly because we've said them all before). 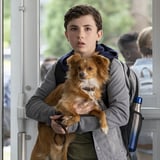 With regard to to the family's morning routine gone awry: "How can we be late again?"
In response to being asked, "Are you happy?": "Who is happy with two kids under 7?" and "We're not unhappy, but we are unhappy, you know."
Said to a relentlessly crying baby: "Be reasonable, you prick!"
In response to being asked by your child why you didn't pursue past dreams: "Life gets in the way, then you two came along. I'm not blaming you — just, you did ask."
In response to an inappropriate question asked at an inappropriate time: "Sense the tone!"
In response to kids making all of the noise, always: "Jesus F*cking Christ, how many times do I have to tell you to be quiet?!"
A parent's profession of love: "I would die for those kids, but often, I also want to kill them."
And being a parent, in a nutshell: "I am medically deranged when they wind me up."

Watch the hilarious and relatable trailer for season one of Breeders above.

Celebrity News
Meat Loaf, Louie Anderson, Sidney Poitier, and Bob Saget Are Among the Stars Who Died in 2022
by Naledi Ushe 49 minutes ago

Sex and the City
What Has And Just Like That Done to Miranda Hobbes?
by Njera Perkins 17 hours ago