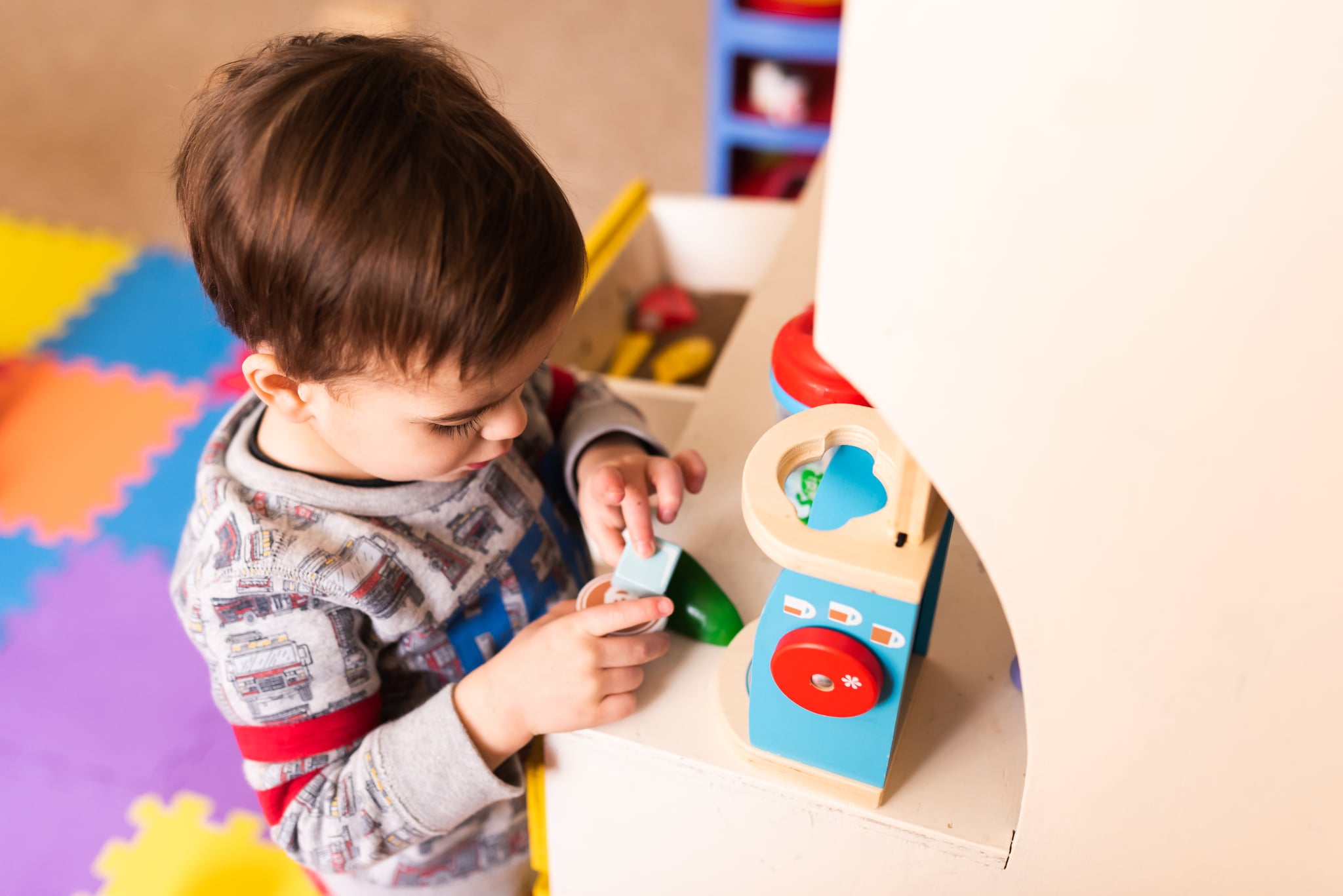 When I had my first baby, I did my best to educate myself. I knew that I was unlikely to get much sleep, that breastfeeding could be challenging, and that my diaper bag would become my new purse. What no one told me was just how long my days as a stay-at-home mom would be. No one told me that I would bust out every weapon in my baby-entertaining arsenal — singing songs, reading books, holding her adorably tiny feet to make her "dance" — and then look at the clock, realize how many hours were left in the day, and feel paralyzed with dread. I had no idea how else to play with her to fill those hours. And so, sometimes, I just didn't.

I laid her on her play mat and let her bat at her dangling toys while I scrolled Instagram. I let the ceiling fan mesmerize her while I folded the piles laundry that seemed to accumulate overnight. Sometimes, I even did the unthinkable, letting her wave her hands at her crib mobile unsupervised while I took a shower down the hall. I settled her in her infant car seat for long, slow walks with the dog, a wonderful multipurpose activity that got the dog (and me) some exercise, ate up a good half-hour, and made me feel like I was doing something constructive with the baby that didn't involve me having to be a one-woman variety show.

All the while, the creeping guilt gnawed away at me. Why wasn't I one of those moms who just held her baby for hours at a time and didn't feel the need to do anything else? Why didn't I want to spend all day playing with her? Was she going to end up psychologically damaged, convinced she was unloved?

Related:
Am I F*cking Up My Kid by Putting Them in Too Many Activities? An Expert Weighs In

My private shame wasn't enough to keep me from taking my play aversion one step further, shuttling my daughter to every music class and story time I could find. On the surface, I felt I could rack up some "good mom" points for exposing my child to songs, books, and sensory play; just below the veneer, I felt guilty as ever. Surely better mothers than me could stay home all day, making up vocabulary-laden songs and mining Pinterest for age-appropriate craft projects. Not only did I want to scream with boredom if I had to entertain my own kid for more than an hour at a time, now I was outsourcing it.

On top of it all, I came to the dawning realization that all of our activities might be more for me than for my daughter. Sure, she loved to bounce along to her music teacher's guitar stylings, but that was nothing compared to my love for getting out of the house and being able to socialize with other moms. The effect on my mental health was striking, and ultimately, I found that the time I did spend entertaining my daughter at home was infinitely more tolerable — even fun! — if I'd just had the chance to chat with another adult for 15 minutes that day. Maybe I wasn't the archetype of the selflessly devoted mother, but ultimately, raising my daughter in a way that felt authentically me was making me the best mom version of myself. The guilt began to subside.

Maybe it was a guilt that I needn't have felt to begin with. According to Miriam G. Winikoff, M.Ed, a licensed psychologist and psychoanalyst, babies are dependent on their mothers and the additional support of fathers and other caretakers for everything, particularly for the first three months. Then, with neurological and psychosocial development, "the baby and the mother learn how to regulate each other. The baby has an impact on the mom, and the mom has an impact on the baby." Which is why as my daughter and I began to figure each other out, I saw that I could put some distance between us without upsetting her. That distance didn't amount to a lack of love for my daughter, despite what my guilty conscience was telling me. Quite the contrary, according to Winikoff: my attunement to my daughter's capacity to be on her own was actually a sign of what psychologists refer to as "secure attachment."

Related:
My Toddler Has Never Napped in Her Crib; I Asked Dr. Harvey Karp If This Was a Big Problem

"Trust your gut. Nobody is a better mother to your baby than you."

That attunement meant that, guilt aside, I was doing my daughter no harm by packing our calendar full of baby activities instead of playing at home if she seemed content and I was maintaining my sanity. Still, in an age where the internet is the easiest source of (often conflicting) parenting advice, it's all too easy to doubt even the approach that feels most natural to us. "Trust your gut," Winikoff said. "Nobody is a better mother to your baby than you. That uncertainty and that doubt, that's part of the game. You're learning a whole person who has the right to have preferences and interests of their own. So do you."

My daughter recently celebrated her second birthday. She is a fun-loving, outgoing little girl who loves making friends with strangers in restaurants, hearing her favorite books over and over, and seeing trucks go by our kitchen window. She bonds easily with other adult relatives and friends, but always comes to me when she's tired, upset, or just in need of some comfort. She seems to have suffered no ill effects from my supposed laziness. If anything, I think she's a happier kid for her ability to entertain herself.

She's also a big sister now — a big sister to another little girl who seems just as content to kick and wave at the toys suspended over her baby seat. I still read and sing just like I did with my older daughter, but when I run out of ideas and turn away from her to check my email, I know she'll be just fine.