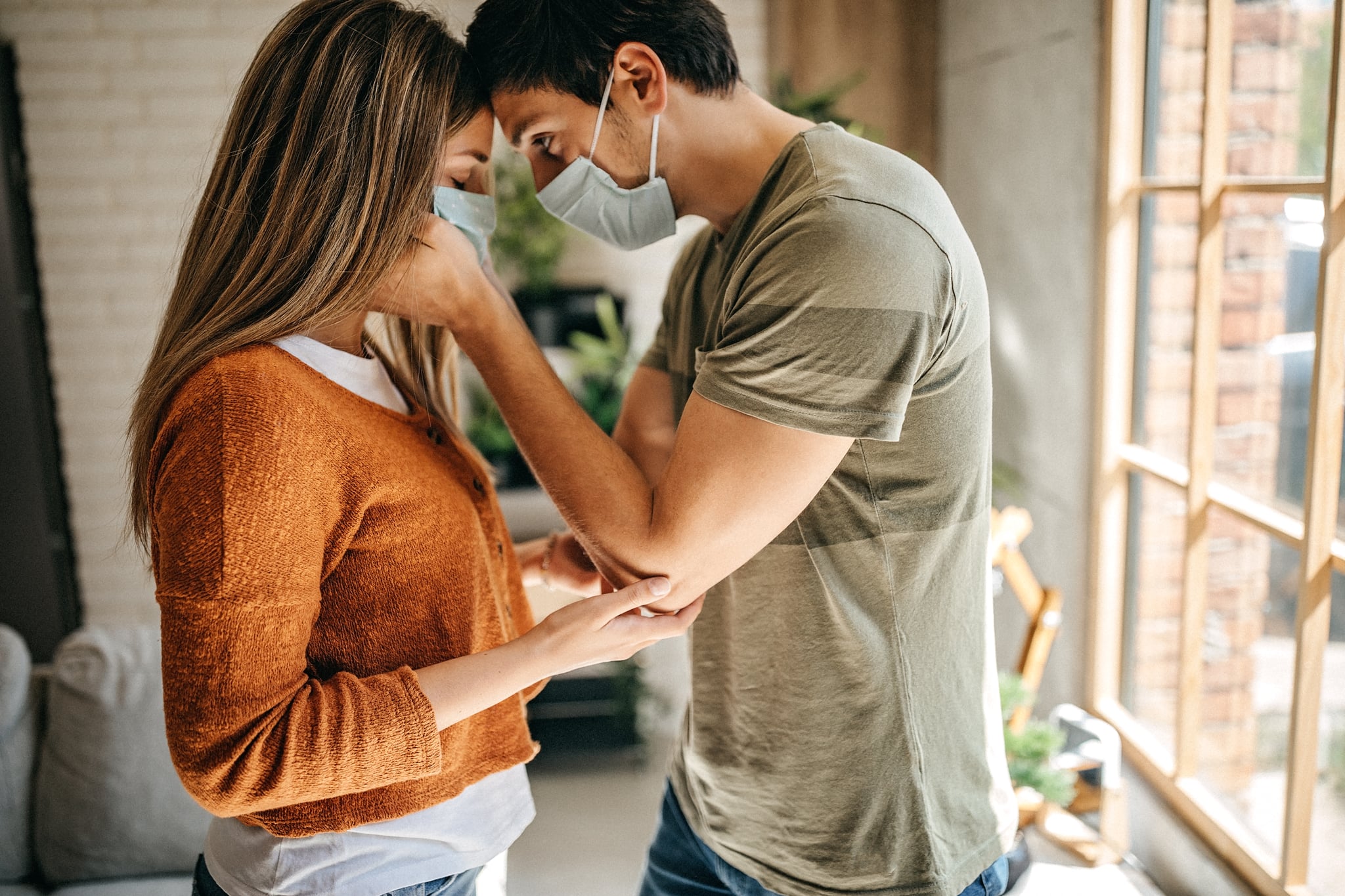 Shelter-in-place and its less brutal cousin, the six-foot-apart get-together, has been the death of extramarital affairs. Staying late at the office, business trip shenanigans, and most other possibilities for infidelity are mostly obsolete now. Even as restrictions ease and people return to work, I doubt there is much flirting over the six-foot plexi dividers separating cubicles or making suggestive faces from behind plastic shields. I'm not an affair kind of person, but I can admit to missing the flirtations inherent in daily life. I wonder if my barista misses me, too.

In its place, a new kind of marital deception has sprung up. One that is infinitely more harmful than when I linger at my son's baseball game because I think his coach is a fox. I call it the "I'm lying about how careful I am with COVID-19" affair. In the midst of the March lockdown, I called a friend to check how she was coping in the new normal. She answered the phone in a whisper. "Can you speak up?" I asked. "No," she replied. "I'm hiding from my husband in my basement closet eating cake."

I immediately became suspicious of my own husband, who seemed to avoid my gaze when I asked him if he Clorox-wiped the UPS deliveries.

It turned out that a friend of hers had decided to celebrate his birthday by baking homemade cakes for his close friends, which he dropped off along with a note telling everyone to Zoom at the same time to enjoy them. "Joe would kill me for bringing this into the house," she explained. "He insists we quarantine everything for seventy-two hours."

Interesting, I thought. I wondered how prevalent this behavior was. And I immediately became suspicious of my own husband, who seemed to avoid my gaze when I asked him if he Clorox-wiped the UPS deliveries. I kept meaning to check if the tube of wipes moved at all from its last use, but I was too busy hugging my case of Chardonnay to remember.

Over the last few months, I've alternated between being one of those "this is my chance to learn French!" and being a worthless sloth. On one of my productive days, I went out for a jog. I ran into a relative who lives nearby, also out exercising. Now this relative is a doctor, the person I call whenever something hurts. ( Well, actually, first I go to WebMD, freak out, and then call him.) I waved from a socially appropriate distance. He waved back. We jogged off in opposite directions. A minute later my Apple watch dinged with a text: If you talk to Lisa (name changed for the sake of their marriage) DO NOT tell her I wasn't wearing a mask. Another deceitful spouse busted, and I went from mildly suspicious of my husband to prepping a sting operation.

The virus has called on society to cooperate in a way we never have before. "We're all in this together," means more than collectively failing at homeschooling and baking too much bread. It means we need to trust that our neighbors, friends, and random passersby will be diligent in the protective measures they take to keep themselves and others safe. Six feet means using a tape measure, not approximating how tall your brother is and moving the chairs about that distance. But what if we can't even cooperate with the people who share our beds? Talk about a viral load.

Related:
I Don't Want to Have Sex During Social Distancing, and It's Hurting My Marriage

We need to trust that our neighbors, friends, and random passersby will be diligent in the protective measures they take to keep themselves and others safe.

In my marriage, I'm the worrier. My husband is the calm one. Friends tell me I'm lucky that William remains levelheaded in a crisis. I didn't feel so lucky when I was pregnant with my youngest and terrified of getting the Swine Flu and vaccines were scarce. (Remember when the only problem was getting the vaccine, not its lack of existence!) I wanted a husband who joined in my fear, who called random doctors whose numbers we found online to try to get me the shot. Instead, I got: "You'll be fine." What did that mean? If I get swine flu, I'll feel okay and our fetus won't come out with a tail? How did he know? He works in real estate and got Bs in all his science classes!

I'm currently on Long Island hiding from the virus. For the record, I had coronavius in mid-March, but now it seems possible to get it twice. And some experts say the second time can be worse. So, yeah, I'm pretty careful. My husband is back at work in New York City during the week. I'd like to say I trust him completely to Purell up to his elbows and use his shirt to touch the elevator button. But I don't. It's not that he doesn't love me or care about my health or his own. It's that his natural state of being is optimism and a sense that things will work out. What the hell did his parents do right?

Now I must admit that I'm not as innocent as I sound. Cheating in the time of coronavirus can take other forms, less physically harmful but equally deceitful. I often claim to be doing the wash when I'm really hiding in the laundry room texting. I have even lied about possible virus exposure to get out of social distancing plans with friends of my husband I'm not crazy about. Alone time is just so hard to come by these days.

Related:
Parenting During Self-Isolation Means I Haven't Seen My Husband in Weeks, and I Hate It

Neither of us is used to having so little privacy. I used to go about my day with freedom, and when my husband asked me what I did, sometimes I lied. "I spent the whole day editing my manuscript" could mean I worked for an hour and then got a mani-pedi and Google stalked my ex until my phone battery died. After three months of William working from home, I'm certainly questioning if he's "on a call" as often as he claims. A typical day now requires far more machination for both of us.

I think some of the "lying" comes from not being sure what and who to trust. The CDC and WHO can't agree on anything. I'm from New York City, where the governor and mayor are frenemies, duking it out over schools and moving between phases. One minute we hear children and asymptomatic people don't spread the virus, the next minute we hear the exact opposite. We're supposed to sing "Happy Birthday" while we wash our hands, but at what tempo? I rush that last stanza every time.

Until a vaccine or a treatment is found, I believe these infidelities are going to be part of our lives, much like marital extracurriculars. Except while cheating on your spouse might bust up your marriage and harm your children, lying about COVID-19 precautions might be screwing your whole county — and that's not worth it.

So think on that before you slip your mask into your back pocket or rush back to spin class. And if you do it, come clean about it. Fourteen days of solitude in the garage isn't the worst thing in the world. Just ask my husband.

by Eden Arielle Gordon 29 minutes ago