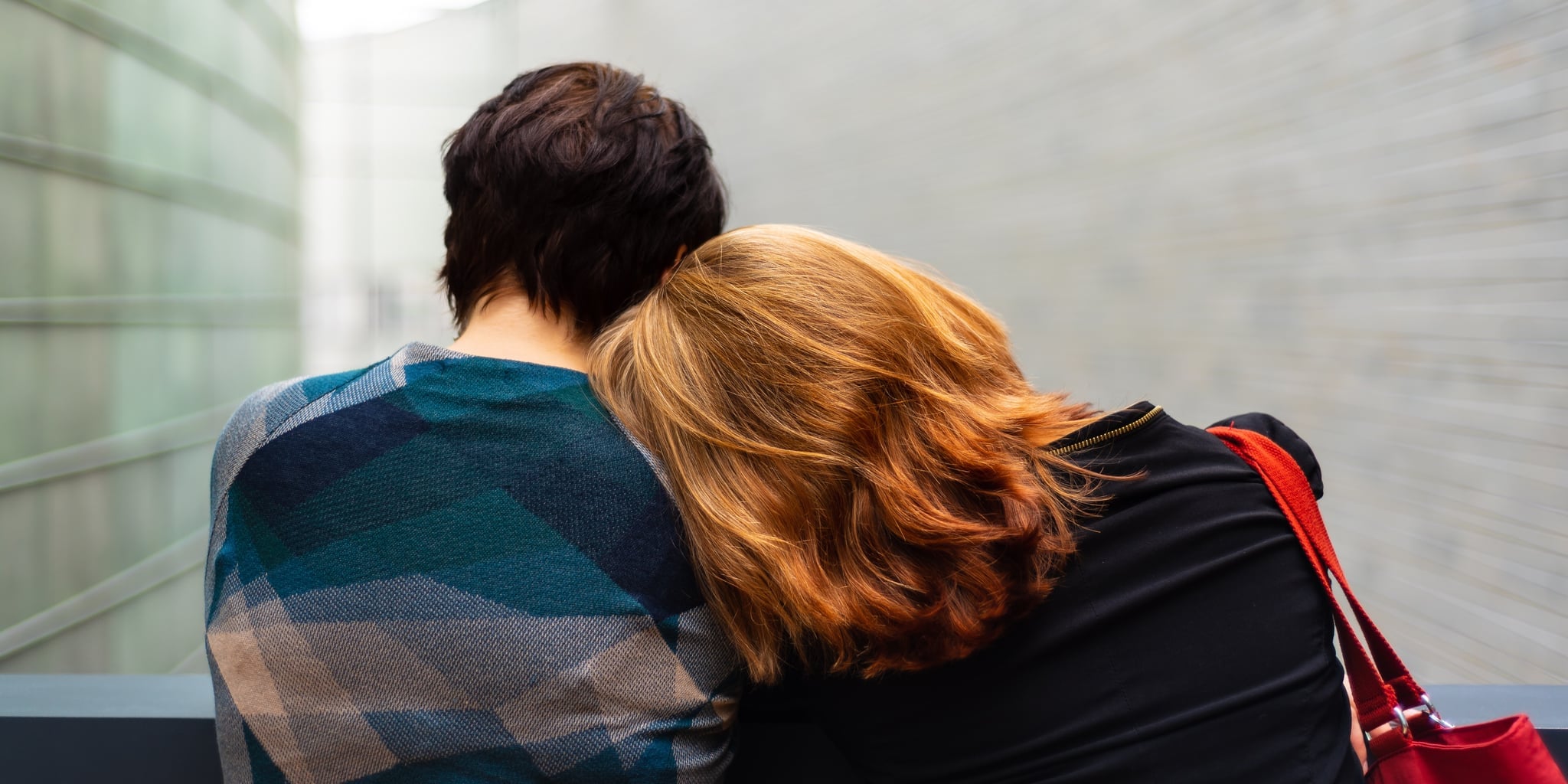 To mark Pregnancy and Infant Loss Awareness Month, POPSUGAR compiled testimonies from 22 women* who have experienced miscarriage. We started our conversations with a simple question: what do you wish people understood about pregnancy loss? The wisdom they shared in response was raw and real. May we heed their words, erase the stigma, and break the silence.

The experience is painful and traumatic — both physically and emotionally.

Every experience is different, but for many, miscarriage is physically painful (and bloody.) Rachel, 33, shared that "it took weeks for my body to feel well again. I wasn't prepared for the bleeding, cramping, and especially the bloating. I needed more than just one day off of work."

Another woman who chose to remain anonymous said her bleeding was so bad, she had to go to the emergency room.

The physical miscarriage experience is also rarely confined to a single day. One woman who opted for natural miscarriage (no surgical intervention) said she had to walk around for weeks waiting for the process to begin: "I felt like a tomb."

According to the National Women's Health Network, "hCG, the hormone associated with pregnancy, may take between four to six weeks to return to its pre-pregnancy resting state." "I wish my friends and family knew that processing what happened is a rollercoaster," said Tina, 33. "Sometimes I'm OK, even happy, and might seem like I've moved on (because in those moments I feel like I have!), and sometimes I'm really sad, and sometimes I'm really angry. I think it'll be like this for a while."

They don't need you to cheer them up.

"The most helpful support I received was the permission to lie under a blanket and cry. I remember a friend saying, 'You don't need to jolt yourself out of sadness; you can just be sad and still for awhile,'" said Jordan, 36.

Denise, 39, wished fewer people would've told her "not to worry" or reassure her it was "for the best."

Sarah, 36, appreciated receiving a text from a friend that read simply "F*CK THAT" because, in her own words, "Really, what else is there to say other than 'F*CK. THAT?'" Now, when she hears from friends experiencing their own miscarriage, she tries to "support them wherever they're at, whether it's sitting and crying, screaming together, encouraging them to punch something, etc."

They really don't want you to remind them that they can always "try again."

For Ally, 31 — who doesn't know if she can get pregnant again — questions about "trying again" or the general timing of a child cut deeply. "I wish family and friends could learn to be less intrusive of the choice to have children. So often 'when are babies coming?!' is a common question but can be very painful when you're actively trying and experiencing miscarriage. Women don't owe anyone an explanation of what's happening in their bodies while trying to create life, and I wish people knew better than to demand answers to something out of their control."

As Sarah, 38, put it: "I've had five pregnancies but only two babies. Don't ask someone if they're trying for another or trying at all because chances are, she is trying, and she miscarried."

"Saying we can always try again is particularly hurtful," says 34-year-old Claire, especially "when you're struggling with infertility on top of the miscarriage."

They don't have the energy to console you while they grieve.

Nearly every woman we spoke with discussed the challenging reality that, since many women and their partners are cautioned to keep pregnancy a secret through the first trimester, loved ones often hear about a miscarriage at the same time they hear about a pregnancy.

"An unexpected part to miscarriage is having to manage others' reactions to the news," said one woman. "Going through a loss and also informing family of it often requires the person to both grieve and console at the same time. It's a hard balance that carries a lot of weight."

Bottom line: their miscarriage needs to remain about them, not you. Laurel, 39, noted how hurtful it was to feel like friends didn't know how to act around her. They were either dismissive ("you'll get over it eventually") or uncomfortable with the intensity of her sense of loss. In essence, their reaction privileged their own feelings of discomfort over her need for authentic, if imperfect, support.

If you want to help, it's best to offer something tangible or specific.

Michaela, 34, said it was helpful for friends and family to offer to do specific and tangible things. Affirmative statements like "I will pick up dinner and leave it on the porch at 5 p.m." or "I'll grab your groceries and dry cleaning so you can take some time to yourself" were especially appreciated by several of the women we encountered. These offers took the onus off of the person suffering, who in many cases found it challenging to ask for specific kinds of help — or even to discern what type of help they needed at that moment.

Those recovering from a miscarriage who already have children spoke passionately about how helpful it was to receive offers of childcare: picking a child up from school, taking them for an outing, or playing with them while the parent(s) took time to themselves in another part of the home.

Rachel, 44, who is still recovering from a miscarriage she had just last week, mentioned how much babysitting would help as she struggles to parent while grieving.

They appreciate every small effort their friends and family make.

Many women remembered the items friends and family brought them in the wake of their loss: care packages of food, candles, movies, books, soft blankets, and thoughtful cards.

Amanda, 31, recalled her mom coming over with flowers. "She held me, because that's what her mother did for her when she miscarried before my little sister was born. We sat on the couch and watched TV, and she held my hand, and that's the most she could have done, and she knew it."

Aimee, 34, said a coworker took care to be thoughtful of her feelings when announcing her own pregnancy and remembered how far that kindness went to making her feel more comfortable.

They need you to keep showing up long after the miscarriage, including during another pregnancy.

One woman said that, while she had incredible support, it has still been tough: "I wish there were more therapists who specialize in it, because a year later, I'm still going to therapy for it." She said Mother's Day is particularly challenging. "I wish more people acknowledged that there are a lot of invisible mothers."

Aimee Baron, MD — who, after her own miscarriages (including four in the second trimester), began supporting women in her own community through I Was Supposed to Have A Baby — spoke about how much fear and dread can surround the pregnancy that follows a miscarriage, even if all signs point to normal. "A piece of me broke each time [I miscarried]. The thought of starting over, not knowing what was wrong, and getting older, not knowing if the next pregnancy would have a perfect embryo . . . It took a huge toll on me specifically but also on [my whole family]."

You can help fight the stigma and the isolation of pregnancy loss by sharing your own story.

Almost every single person who shared their experience with us mentioned the tremendous comfort that came from the stories of others. "Hearing from friends who had also had miscarriages was the most meaningful support. It helped me to feel less alone and know that I could go to those people for support or advice from someone else who had been through something similar to me," said a 38-year old who wished to remain anonymous.

Abby, 37, noted how despite not wishing miscarriage on anyone, she wishes she knew more people who had been through it, so she could've felt less alone.

For the women we heard from, sharing their own stories has been an imperative part of the recovery process.

Another 38-year-old woman reflected upon using her experience to support others: "I felt very lonely during the days and weeks following my miscarriage, and I'm glad to have been able to be there for others in those same moments, so that they feel a little less lonely than I did."

A 34-year-old woman from Chicago, shared how important it has been for her to talk about her experience: "Acknowledging the pain out in the open . . . that's how I'm healing each day."

*While everyone quoted in this article is female, it is important to note that transgender and nonbinary people can and do also experience miscarriage.