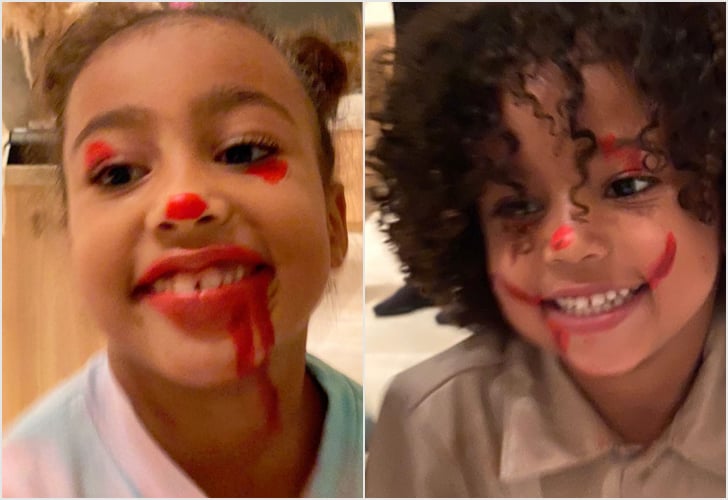 Kids and lightly colored furniture go together like oil and water, orange juice and toothpaste, feet and Lego pieces, and — well, you get the picture. Kim Kardashian just learned this fact the hard way when her beloved off-white couch was accidentally ruined by her daughter North West's latest foray into the world of makeup.

Here's what went down: although Halloween is a cool nine months away, North had the pressing urge to give her younger siblings, 4-year-old Saint and 2-year-old Chicago, their own Pennywise makeovers inspired by the movie It. Using what we assume to be bright red lipstick, the 6-year-old painted on her brother and sister's faces to make them resemble the terrifying clown, and TBH, the results aren't too shabby!

Related:
The Kardashians Have the Cutest Kids in Calabasas — And We'll Prove It

What is rather shabby, however, is the fact that Kim's couch didn't make it out unscathed. After sharing some adorable photos of her kids's Pennywise makeup looks on Instagram Stories, the mother of four posted a snap of her previously pristine furniture with a giant red stain on it, captioning the photo, "My couch 💔😭." Welp, North may be following in her mama's makeup-loving footsteps, but let's hope she works on her aim and accuracy in the meantime.

Ahead, see all the LOL-worthy snaps of North, Saint, and Chicago looking like the most adorable Pennywises you've ever seen.

Celebrity Families
Ashlyn Harris and Ali Krieger Adopt Their Second Baby: "Our Hearts Are Full"
by Victoria Messina 17 hours ago

Simone Biles
Seeing Double: The Cutest Pictures of Simone Biles and Her Sister Adria
by Victoria Messina 21 hours ago

Kim Kardashian
Kim Kardashian Wears a Plunging, Zip-Front Swimsuit For a Day on the Lake
by Sarah Wasilak 22 hours ago

Kim Kardashian
Skims Just Dropped a New Swimwear Collection, and It's a Figure-Flattering Fit
by Anvita Reddy 4 days ago