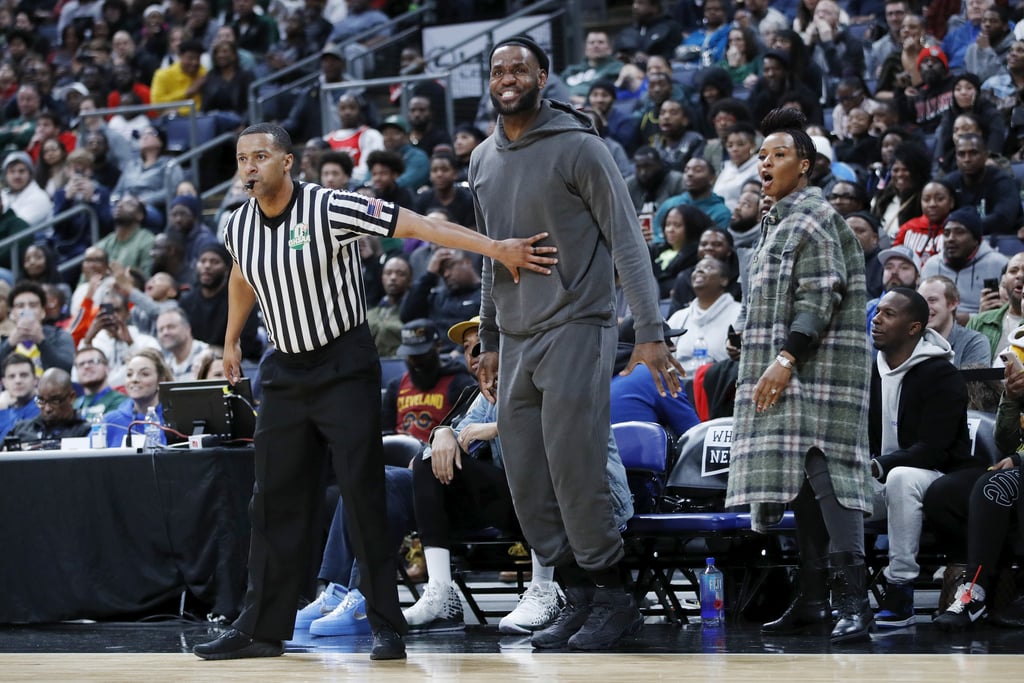 LeBron James had a full-circle moment over the weekend. The proud father and Los Angeles Lakers star witnessed his son beat the high school team he played for 17 years ago. On Saturday, his 15-year-old son, LeBron James Jr. (aka Bronny), and the talented Sierra Canyon High School basketball team bested LeBron's alma mater, St. Vincent-St. Mary High School, at Nationwide Arena in Columbus, OH, and LeBron was overwhelmed with emotions. Being a proud sports parent is one thing, but when you're LeBron James and your son is playing your alma mater, it's a whole different experience.

He and wife Savannah were surrounded by their closest family and friends, and despite it being LeBron's day off from professional basketball, he beamed with pride as they cheered from the sidelines. Following the game, LeBron took to Instagram to share a clip and some photos of the special moment. "Last night was such a surreal feeling for me!" he wrote. "Watching my son play in our home state vs my Alma mater St. VM who's still being coached by my mentor, father figure, guy who coached and helped guide me throughout my childhood both on and off the floor Coach Dru Joyce II. . . . For @Bronny to play the best game of his young high school career so far, make the biggest play of the game and to walk away winning the MVP in his/our home state and his family and friends was a story book moment."

He added, "So so so eerie but I know it was SPECIAL and meant the world to me to be there in attendance! Can't even lie I was nervous as hell for him but damn he was poised and controlled. WHAT AN UNBELIEVABLE NIGHT it was! Thank you man above and 🏀!! #JamesGang👑 #WeareallkidsfromAKRON🙏🏾" LeBron also posted a photo of himself from after a win in a high school game 17 years earlier, sharing it alongside a picture of Bronny from after Saturday's game. In the photos, LeBron and Bronny are holding trophies and standing with the same man, who put both games together. "This is craziness/surreal!!" he wrote.

Sure, Bronny beat his dad's high school team 59-56, but LeBron couldn't have been more proud. His son had a career-high 15 points, made the game-winning play, and was named the MVP of the game. Check out photos from the game ahead, and prepare to let out an audible "awww" at the special moment.

Related:
Parents, Going to Every One of Your Kids' Games Matters More Than You Know
Previous Next Start Slideshow
Celebrity FamiliesLeBron JamesSportsBasketballAthletes