The sweetest thing happened this morning that made my entire year... as you know I’ve been home in quarantine with...

Single mother of two Lisette LeJeune has spent the last two weeks quarantining at home after she and her sons contracted COVID-19. Dependent on friends and family for groceries and other necessities, Lisette was surprised when a care package from her local mail carrier, Mary, showed up on her doorstep one day.

"I was really sick the first week, so it was really hard trying to take care of both of [my kids]," Lisette, who has been doing her best to care for her 3- and 14-year-old sons through her illness, told Good Morning America. "It's so hard being a single mom."

After spying a care package filled with crackers, cans of chicken soup, and cookies, Lisette racked her brain trying to figure out who sent the thoughtful gift. Upon further inspection, she found a heartwarming note from Mary, which read: "Dearest Customer, Get-well wishes . . . I hope you all are feeling better!"

"What made me emotional was just the thought of her getting the bag ready."

Although Lisette only had spoken to Mary a few times, she recalled how she had recently informed her mail carrier about her family's diagnosis and suggested Mary leave any packages in a bucket outside to avoid infection. "She said, 'OK, thank you,' and that was it," Lisette explained. "I guess she saw the bucket was still there in front of my door two weeks later."

Lisette didn't give the conversation another thought until the package showed up. But as soon as she saw who it was from, Lisette rushed to check the footage from her doorbell's camera.

"What made me emotional was just the thought of her getting the bag ready, in the morning before starting work or the night before, just her having us in mind with her daily routine," Lisette said. "We were having a hard time here at home getting anything delivered and our family was helping us, but still I couldn't run out to get anything last-minute. I had just run out of orange juice and I needed that to give to my son." 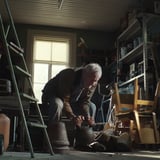 In an Emotional Holiday Ad, a Grandfather Lifts Weights Ahead of Christmas For the Sweetest Reason

Mary, who asked that her last name be withheld, released a heartwarming statement through a spokesperson for the United States Postal Service. "I was just making a small gesture of kindness," she explained. "The customer expressed concerns about my well-being with contacting the same mailbox as her while she was sick. After a few days, I left a get well gift at her doorstep because I appreciated her concern. I didn't expect it to get so big but I would have done the same for anybody."