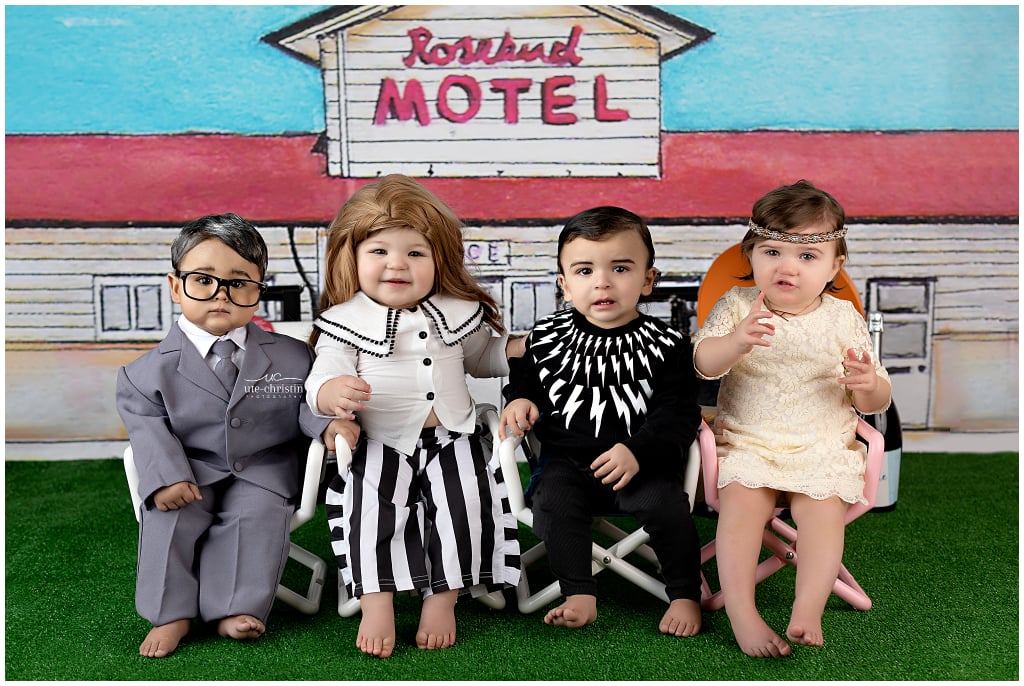 Connecticut-based photographer Ute-Christin Cowan was determined to celebrate her studio's 10th anniversary in a major way, so when the ambitious idea of staging a Schitt's Creek-themed cake smash popped into her head, she ran with it. Eager to get the concept for her favorite comedy series just right, she put out a casting call to find her perfect David, Alexis, Moira, and Johnny. As soon as she found her sweet little actors, it was time to create an authentic setting, but Ute-Christin admits sticking with only one setup was difficult.

"We couldn't decide if we should take on the motel backdrop or use Rose Apothecary," Ute-Christin told POPSUGAR. "So instead I said, 'Let's do both!' It was my most involved cake smash yet. I looked on Instagram for images of the hotel that we could potentially use for a backdrop and found a talented artist who drew me the hotel. I wanted to replicate the show's backyard picnics and bought some fake grill food and everything you need for a good BBQ." Of course, the "HAPPY DAY ALEX & DAVIS" cake was inspired by the iconic "Grad Night" episode in season three. Remember when Alexis graduated high school on David's birthday? We thought so!

Given all the iconic scenes that take place in David and Patrick's store, Rose Apothecary, Ute-Christin knew she needed to get every last detail right. "I wanted the store's setup to have a chic, authentic style," she explained. "I ordered a backdrop and bought the ladders from my photographer friends. I also made the shelves, styled the set with items from Michaels and Hobby Lobby, and ordered some Rose Apothecary products from Beekman 1802 to complete the setup."

Although the photo shoot required a ton of planning, her efforts totally paid off. "This shoot was so much fun, we all had a blast," she said. "We're all such big Schitt's Creek fans and we wanted to celebrate the show before it comes to an end after this season. We've already bought our tickets for their farewell tour in June, and cannot wait to celebrate them there as well. With this homage, we wanted to thank the actors for all the laughter and the warm fuzzy feelings!"

Scroll ahead to get a peek at this truly one-of-a-kind Schitt's Creek cake smash!

Related:
30 Oh-So-Relatable Schitt's Creek GIFs to Save For Later Use
0
previous images
-3
more images
Previous Next Start Slideshow
BabiesPhotographySchitt's Creek
Around The Web