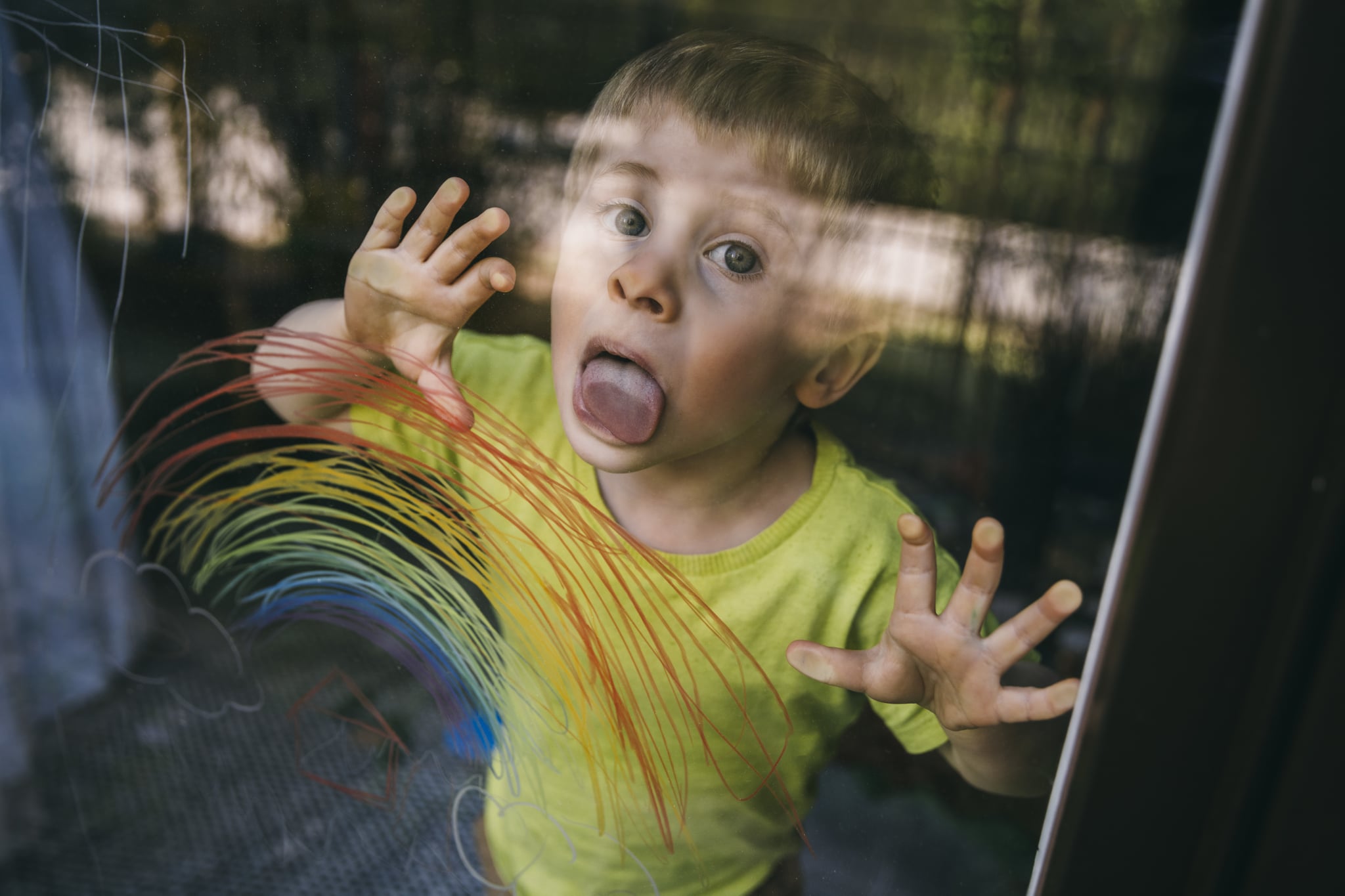 I have never paid so much attention to a tongue until I became a mom. "Don't lick your brother," I remind my 2-year-old. "We don't lick random cars!" "No mouth on the shopping cart!" And, my personal favorite during pandemic times, "Stop licking the floor at the doctor's office!" I wish I could say these were just hypothetical examples, but no, they all really happened (in fact, my dad jokes that licking random, germ-y things is how toddlers build their immune systems). Toddlers are very curious, which is great most of the time. But for some reason, one way my son likes to explore the world around him is by licking things. Is this normal, and if so, why do they do this? I talked to two pediatricians and a psychologist to find out more.

Related:
My Toddler Started Sleeping on the Floor, So I Consulted the Experts — Here's What They Said

Why Does My Toddler Always Lick Things?

In general, toddlers are at an age where they are more interested and aware of the world and licking things is one way they make sense of it, said Mona Amin, DO, a pediatrician and mother. "Developmentally, toddlers will start to show more independence and awareness for the world around them as they move from baby to toddler," she told POPSUGAR. "They are explorers and want to touch, smell, see, and sometimes even lick everything."

Although I cringe every time I catch my toddler licking things, it's not unusual behavior for them to explore the world via tongue. Holly Schiff, PsyD, licensed clinical psychologist at Jewish Family Services of Greenwich in Connecticut, said that toddlers lick because they enjoy new sensory experiences. "Licking objects is a way for them to receive sensory information about taste and texture," she told POPSUGAR. "This is a way for them to understand their surroundings, explore new objects, and experience the novelty of the world around them." If the behavior is repetitive, your child could find a sense of comfort from it, Dr. Schiff said. Or, if you have a cat or dog at home, they may do it just to mimic the family pet.

Is It Dangerous That My Toddler Licks Everything?

Licking isn't necessarily dangerous, but it can expose your toddler to germs (not great, especially during COVID). However, you want to make sure that want your child is licking isn't poisonous or detrimental. "It can be problematic if your toddler is eating dirt or other items that contain lead that can result in lead poisoning," said Pierrette Mimi Poinsett, MD, pediatrician and medical consultant for MomLovesBest. If you're worried, you can have your child tested for lead. However, if you're noticing the behavior continue for too long, or they continue to lick harmful things, that's when licking becomes an issue.

How Can I Get My Toddler to Stop Licking Things?

Usually telling my son "no licking" helps him stop in the moment, but it isn't a long-term solution — it's one of his go-to moves when we are in new places. Dr. Amin suggested engaging toddlers' senses with sensory play instead — letting them play with shaving cream, paint, or edible sand, for example. "Incorporate activities that work fine motor skills (like feeding pipe cleaners into a strainer or pulling sticky notes off a wall) as well as music (drumming on pots and pans and having dance parties)," Dr. Amin explained. "Crawling over obstacles and tunnel games can help them develop motor skills as well."

When you are out in public or at home and you want to stop your toddler from licking, Dr. Amin said to be consistent and gently tell them, "We don't lick things," as you remove or put away whatever they're licking. "Parents can also redirect the conversation and say, 'What's another way we could use that object besides licking?'" she said.

Dr. Schiff also suggested distracting toddlers or offering chew toys or chewy, sour, or minty snacks. "These can help your toddler meet their oral sensory seeking behavior and give strong input to proprioception receptors in the mouth, which is helpful in preventing licking behavior," she told POPSUGAR. Afterward, be sure to positively reinforce your child for refraining from licking or using a replacement item to lick.

"Another way is to help them analyze things in a different way," explained Dr. Schiff. "Pick up an object and ask them to explain what they feel or see — maybe sniff an object to engage other senses." As a last resort, and only if they are licking something that isn't dangerous, Dr. Schiff recommends simply ignoring the behavior so it isn't reinforced. Your toddler should stop on their own once they are past this developmental phase.

I, for one, am so excited about the licking phase ending. In the meantime, I'm going to minimize public outings and maximize distractions — and if you see my 2-year-old watching an iPad while we're out, you'll know why!