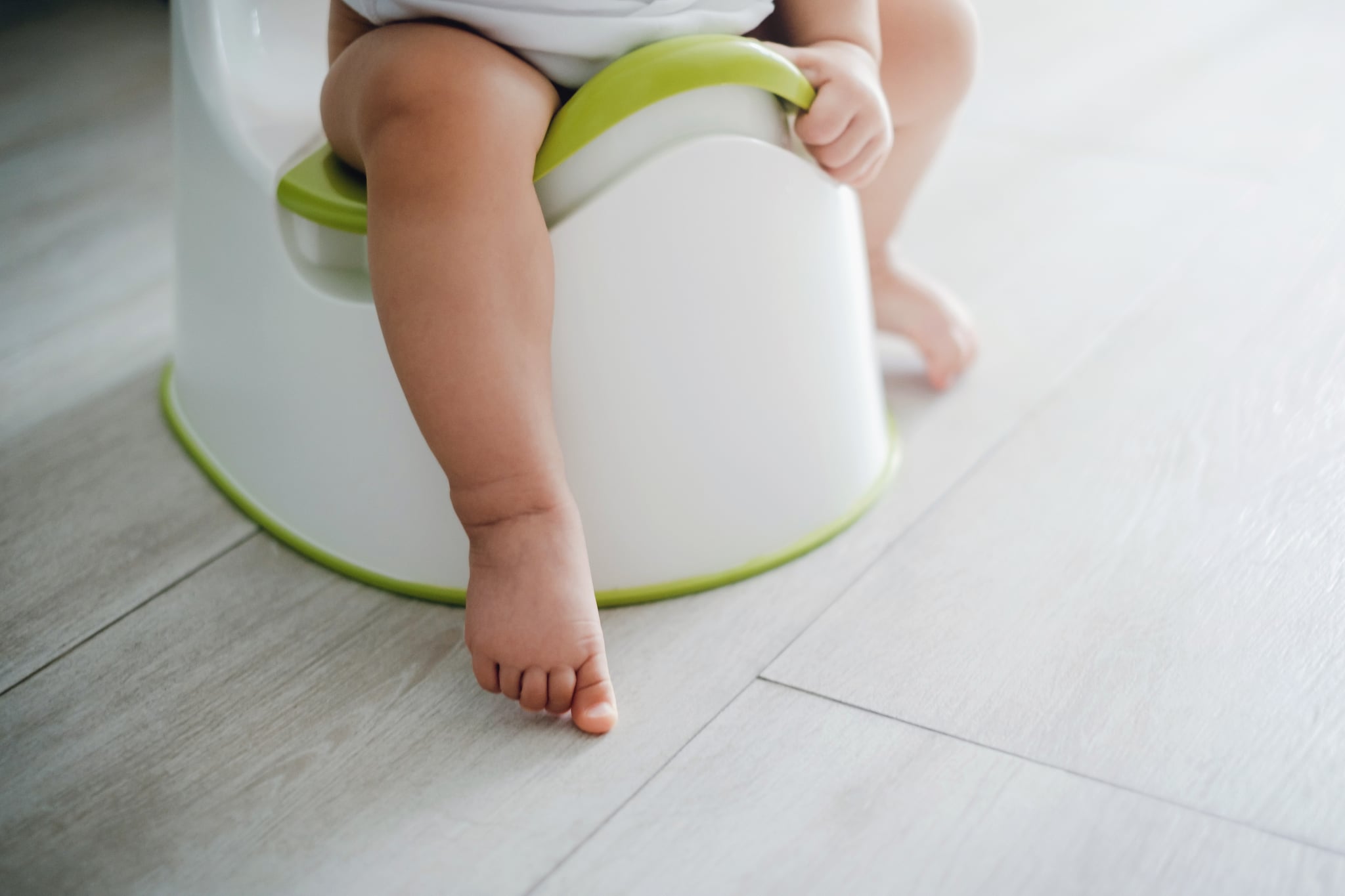 I potty-trained my daughter when she was 17 months old — and I have no regrets. I chose to do it because she was ready, but after hearing so many insistent naysayers, I decided to keep a low potty profile. It's not that I kept the fact that my child was toilet-trained a secret, but I didn't bring it up if I didn't have to.

I started teaching my daughter about the toilet when she was 6 months old. Once she started eating solid food, it became obvious to me when she was about to have a bowel movement, so I started holding her up on the toilet. She was very predictable — she pooped three times a day, right after each meal, so I was truly able to keep her diaper clean.

Since she was not yet verbal as an infant, I used American Sign Language to communicate to her that this was the potty. She was 13 months old the first time she signed to me that she needed to go. I was talking to a friend who thought it was so cute that she was "waving hello." Nope — I beelined to the bathroom. That was it and I never had to actually do any official bowel training, because she learned through experience. Pee was a bit more complicated though.

When she was 14 months and walking, I switched her from diapers to pull-ups and began taking her to the toilet at regular intervals. I was not yet teaching her how to control her bladder. Instead, I was preteaching the skills I knew she'd need for successful potty training in the future. We spent a month working on pulling pants down, reading books about using the potty, and emphasizing the idea of staying dry.

In the meantime, I was reading up on potty-training methods, and the method that was most recommended in my circles was outlined in the book Oh Crap! Potty Training: Everything Modern Parents Need to Know to Do It Once and Do It Right ($11). I put that idea on the back-burner when I went back to work though, and I instructed my husband and our nanny to continue bringing my toddler to the toilet at certain times as I had been doing.

Soon, she started telling me when she needed to pee, and her blossoming independence made her so proud. I could tell she was ready to use the method I had read up on, but I instinctively knew that I had to be the one doing it, full-time, for it to work. The Oh Crap method has you stay home with your completely naked toddler while you watch them carefully for signs of needing to go. When you see an indication that they need to go, or, as it usually happens toward the beginning of training, when they actually start to go, you bring them quickly to the potty.

I planned to take 12 days off of work around the Thanksgiving holiday to train my daughter because I knew my husband would be away traveling and I could fully devote my attention to potty training. But my curiosity got the best of me and I started in September. During the six hours that she was in my care each day, I started "practicing" the Oh Crap method. While I was at work, she wore pull-ups and my nanny or my husband continued to bring her to the toilet at intervals. Technically, the book advised against this, saying you really needed to go all out and get rid of diapers once and for all, but things turned out OK. Once the Thanksgiving holiday arrived, I went through the process exactly as it was described in the book, and because of all the extra practice she had, it was fairly seamless.

There are many benefits to having a potty-trained toddler, like the convenience of not needing to worry about diapers anymore, but to me, the best part was the sense of accomplishment my daughter felt from being able to independently read her body's cues and take care of her own needs.

Related:
I Potty-Trained My Toddler in a Month — Thanks to Jelly Beans and JoJo Siwa

I didn't mention potty training on social media or bring it up in my mom groups. I heard a lot of talk about how the best way to potty-train is to wait until the child is ready, and while I completely agree, I knew my understanding of ready was different than many people's. You see, I don't believe that we are supposed to sit and wait for our child to suddenly become ready. The way I see it, we need to provide some experience for them to discover and a context in which they can actually show us when they are ready. If they don't know anything about toilet use, how will they know when it's their time? I think kids need a certain level of adult direction.

I would have never trained my daughter if I didn't know that she was ready. I only moved forward when things were clearly clicking for her, and they did much more quickly than I had expected. At that point, I really felt that not teaching her more when I knew she was capable would have been doing her a disservice. To me, it felt like we were making our way up a metaphorical staircase, where I'd hold her hand and she'd take each step when she could. If she took one step, why not allow her to take the next?

While I didn't actively try to keep early potty training a secret, I didn't feel a need to talk a lot about it with anyone other than my husband. It would sometimes become obvious that my young toddler was trained when she'd announce that she had to go, or when her clothing made it clear that she wasn't wearing a diaper. I often found myself face to face with some very insistent naysayers. They'd harp on about how she is too young and I should have waited until she's ready, or they'd send me articles about the dangers of early potty training. For the most part, I tried to keep my responses brief and not let it bother me because I knew I did the right thing for my daughter, but it was still hard. Being judged about my parenting choices can feel very personal for me, especially when it's being implied that I'm not properly meeting my child's needs.

The proof was in the pudding though, and over time I became more confident. Somewhere around 20 months old, I also noticed the general response changing from "you shouldn't train early" to "that's so awesome that she's already trained." I learned that it's always best to trust my own judgment because other people's insight comes from general parenting knowledge, but only I know my daughter's individual readiness.