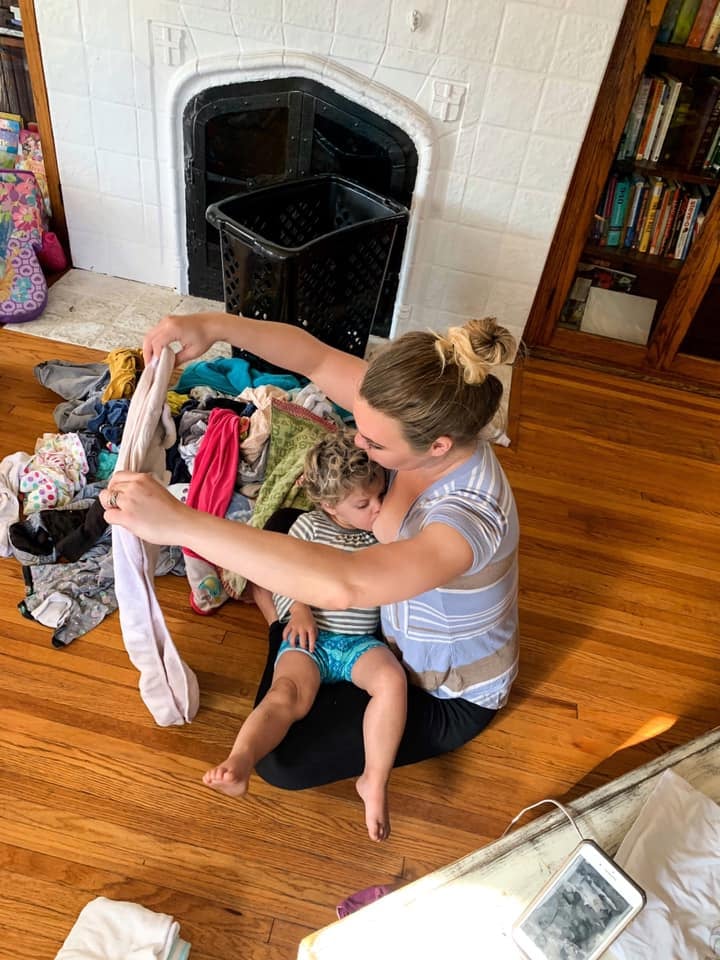 Melissa Ostroth, a mom with a toddler and, subsequently, a whole lot on her plate, recently shared why she can't imagine any mother would engage in extended breastfeeding for purely selfish reasons, though sometimes they're accused of such. In a poignant Facebook post, Melissa explained that she's breastfeeding her toddler daughter because it's good for her personally, not because she has something to prove.

"Tell me again how breastfeeding my toddler is just for myself?" she wrote. "Doing loads of laundry with a child hanging off my breast is just for me right? Breastfeeding a monkey-swinging, gymnastics-tumbling, handstand-attempting child while your nipple is in their mouth is what us self-absorbed mothers are constantly longing for! No one is breastfeeding their toddler or older child for themselves. It is for their child alone. I repeat: it is for their child alone. No one is forcing their child to breastfeed and not ween."

Although Melissa is quick to point out that breastfeeding enhances the connection she and her daughter share, she's also aware of the unfair stigma that surrounds long-term breastfeeding.

"Don't get me wrong, I still love breastfeeding — the bond and those quiet moments when my toddler is nursing and cuddling with me fills my heart with joy," she explained. "The fact I can cure any tears in a matter of seconds, knowing that they are taking in antibodies and immunities that are tailor-made for them, is so amazing. However, for whatever reason, some people have gotten it into their heads that mothers who practice natural-term weaning are doing it for themselves and are just not willing 'to cut the cord.' Those people are wrong. Breast milk continues to provide antibodies, immunities, white blood cells, and hormones that are so important for a child to grow."

"For whatever reason, some people have gotten it into their heads that mothers who practice natural-term weaning are doing it for themselves."

To back up her point, Melissa cited a 2018 study on the benefits of breastfeeding your child after the age of 2. "Breast milk doesn't lose its benefits with age," she said, quoting the research, "Human milk in the second year postpartum contained significantly higher concentrations of total protein, lactoferrin, lysozyme, and Immunoglobulin A than milk bank samples, and significantly lower concentrations of zinc, calcium, iron, and oligosaccharides."

She took her logic a step further by mentioning research from 2001 that shows what benefits children between the ages of 12 and 23 months reap. According to the study, 448 mL of breast milk provides:

"Pretty awesome, right? Besides all the benefits mentioned above, breast milk provides all the immunoglobulins the immune system takes to develop, which takes around five years," she said. "Humans are also the most immature at birth and need the most intensive caregiving for the longest duration to reach maturity (three decades!). Breastfeeding continues to be important for years as the child's brain and and body slowly continues to grow."

But it's not just about the nutrients. "Let's not forget that breastfeeding is more than just food," she said. "It provides comfort, it is a 100 percent all-natural anti-anxiety, anti-inflammatory, medicine, sleep aid, and more — not to mention the absolute best bonding mechanism."

To Melissa, extended breastfeeding just makes sense for her, especially because the World Health Organization (WHO) recommends it when possible. "Call me crazy, but maybe that's why the World Health Organization recommends breastfeeding until at least the age of 2 and beyond? Maybe that's why the natural weaning age is between 2-7 years old?" she said. "So again, we aren't continuing to breastfeed past infancy for ourselves. We aren't scared 'to cut the cord.' We doing it for our child's optimal health and comfort."

Although Melissa believes extended breastfeeding is beneficial to her daughter and it's what works for her, we're of the belief that fed is best and that parenting is all about doing what works for you and your kids.