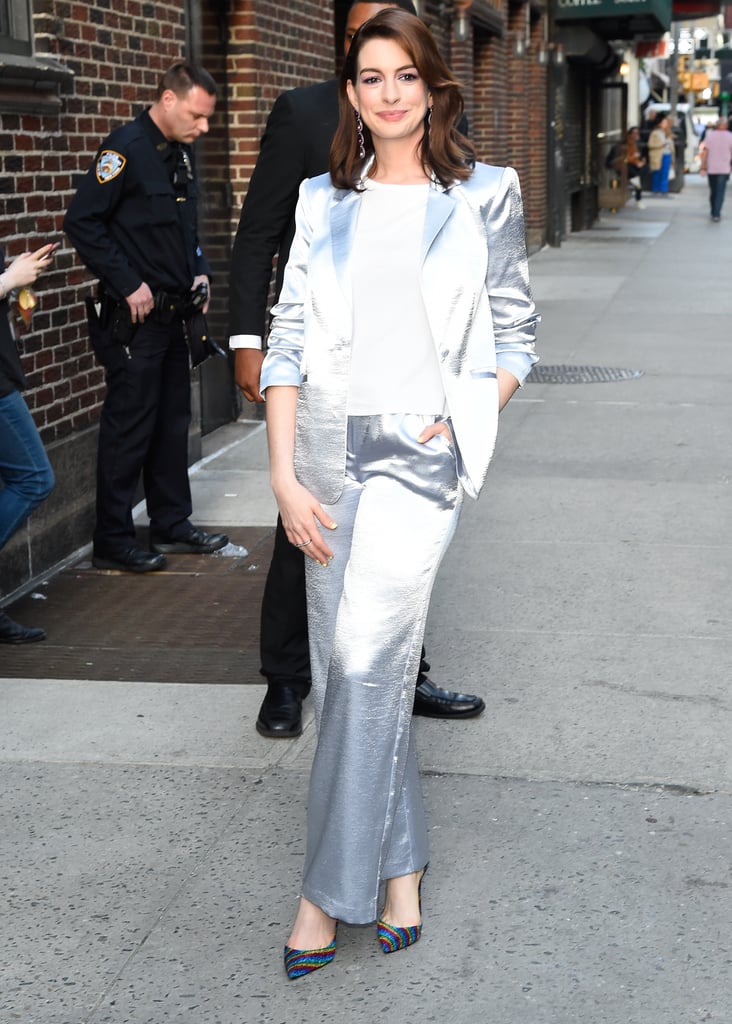 Anne Hathaway Shared the Reason She Repeated This Pantsuit, and We Love Her For It

Anne Hathaway has served some major fashion and beauty moments over the years. But, of course, she is only human and prone to some slip-ups. She was on The Late Show With Stephen Colbert last night and entered the building in a chic powder-blue pantsuit with laced-up panels, but she left in a silk pants and blazer set with a plain white t-shirt.

If you are wondering why, no, it wasn't just an excuse to throw on another glamorous outfit — though that would be par for the course in Hollywood. Actually, the explanation might surprise you: she ripped her pants. Yes, you read that right; like so many of us, Anne wore a gorgeous outfit only to realize that it had a gaping hole in it and it was too late to change. Both luckily and unluckily for Anne, the tear went "all the way to Christmas," as Stephen phrased it, because she was able to cover it while posing cross-legged and with a blazer long enough to cover it.

Once she was in the building, Anne had her assistant run over to her house and pick up a gorgeous silk pants and blazer combination. The outfit was blue, too, so her shoes and accessories matched it. The team at Stephen's show steamed it, and she was good to go. You may have seen Anne in this outfit before, because turns out, it is the exact outfit she wore on the cover of Shape magazine this month, but desperate times call for desperate measures.

Anne totally laughed off the incident on the show and poked a little fun at herself. She even encouraged the audience to search for the photos of her awkwardly posing outside Stephen's show to cover the tear in the crotch of her pants. Well, we have the photos right here, and by the looks of it, we would have never guessed she had a tiny wardrobe malfunction. We absolutely love Anne for being so candid, because haven't we all been there? Keep reading to see how this legend seamlessly evaded photographers while entering the building.