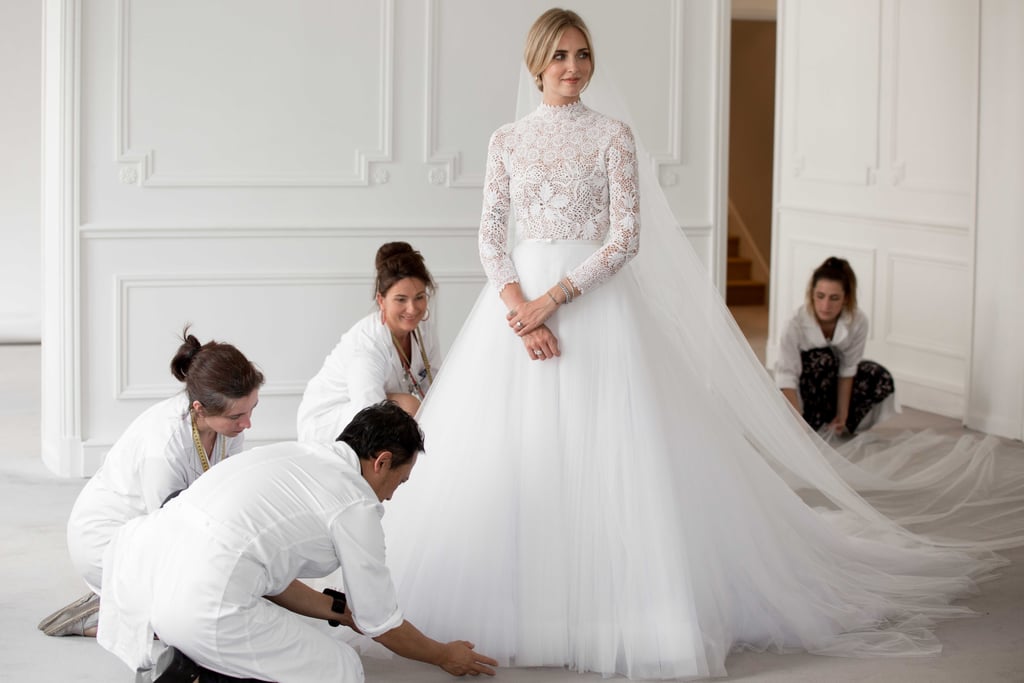 Chiara Ferragni's Second Wedding Dress Was Stitched With Song Lyrics, and Her Third Came With Flats

Oh boy! What we would have given to walk down the aisle in Chiara Ferragni's glistening Prada rehearsal dinner look. But just hours later, the style influencer and entrepreneur revealed her custom Dior Haute Couture wedding gown, which was obviously the most important look of the weekend in Italy, where she tied the knot with Fedez.

While Chiara's Prada midi was covered in gold and pink beads and stones, complete with a matching pouch and satin sandals, her Dior design was modest, composed of an intricate embroidered bodice with three-quarter sleeves and a high neckline, along with a full tulle skirt that featured a slit at the front, so you could see her personalized slingback heels as she walked. It required 400 meters of fabric and 1,600 hours of work at the ateliers, according to a press release from Dior.

But Chiara's party dress, another custom creation by Maria Grazia Chiuri, was stitched with song lyrics from "Favorisca i Sentimenti," written by Fedez, along with symbols that represent the couple's relationship, and a lion for their son, Leone. Finally, Chiara changed into her third Dior masterpiece: a mini fit for a ballerina, which came with personalized Dior flats.

Chiara's bridesmaids wore sugar-pink Alberta Ferretti slips, some strapless and some with plunging necklines. Read on to see the major fashion moments we saw, including snaps of the matching Pomellato wedding bands the pair exchanged, then track the couple's hashtag, #theferragnez, on Instagram for even more shots from the evening.

Kanye West
According to Julia Fox, Juliye Is In
by Naledi Ushe 18 hours ago