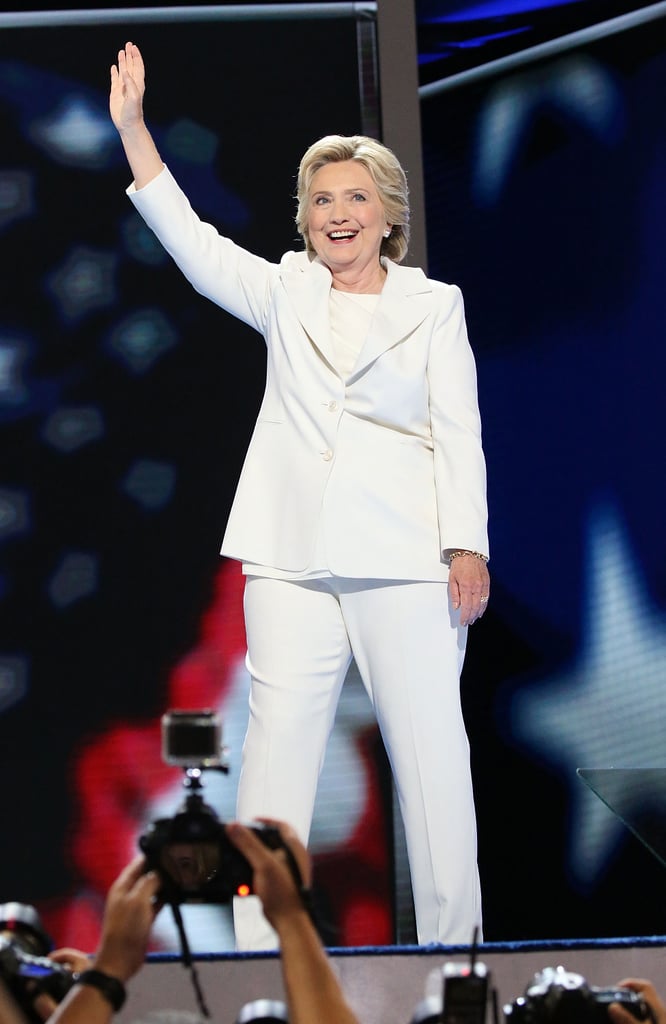 Of course a pantsuit was the perfect choice for Hillary Clinton's Democratic National Convention speech. A tailored, three-piece set is a look she's come to own over the years — and in just about every color of the rainbow. But in a milky white shade, the presidential candidate hit the reset button and, more importantly, paid homage to the uniforms of the woman's suffragist movement, as The New York Times pointed out.

While Business of Fashion has learned that Hillary's been consulting with none other than fashion heavyweight Anna Wintour on her wardrobe choices, communications director Kristina Schake (who has helped dress Michelle Obama) also plays a role in choosing her outfits.

Hillary's ivory Ralph Lauren suit was a fresh style choice that did not distract from her powerful words, and, like the Christian Siriano number Michelle wore nights before, it was minimal, sophisticated, and comfortable — perhaps the most underrated detail when it comes to choosing a look you're about to make history in.

Of course, there's a chance Hillary had more of a hand in choosing her ensemble than we think. To say that Ms. Clinton is inexperienced when it comes to making memorable appearances, well, that would just be foolish. Read on to see Hillary's suit from all angles, complete with a pair of neutral kitten heels that gave her just the boost she needed on a very special night.

Michelle Obama
Michelle Obama Responds to "Horrifying" SCOTUS Decision: "It Must Be a Wake-Up Call"
by Yerin Kim 6/24