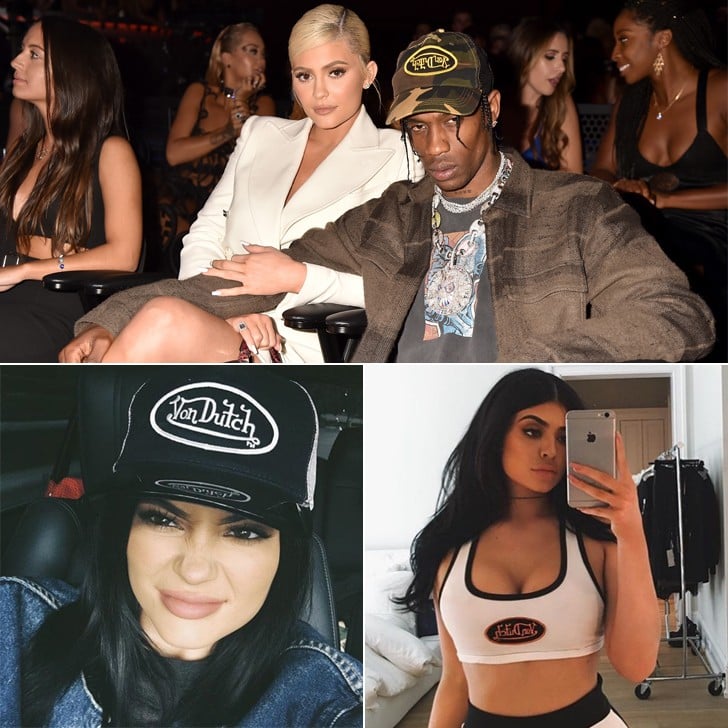 If I'd Had Travis Scott's Upside-Down Von Dutch Hat in Middle School, I Would've Felt So Cool

When I was in middle school, I wanted a Von Dutch hat so badly that I dragged my mom to the corner boutique and insisted we buy the last one it had in stock. It was poop brown. "Do you really want that color, though? All the ones you showed me were pink and purple and pretty," she said. But I did want it. I needed my Von Dutch hat to be authentic, even though $50 was a ridiculous price to pay for a trucker cap. And so I owned one in poop brown. Then I bought the "fake" version in pink with my allowance, which probably only set me back like $25.

But Travis Scott won, because Travis Scott has an UPSIDE-DOWN Von Dutch hat, and I don't care what year it is. He wore it to the MTV VMAs, sitting by Kylie Jenner's side, cooly displaying his camo accessory in the audience. It's actually a piece from LA-based designer Bana Bongolan, whom Scott has publicly supported before, thereby helping to sell out the upside-down Von Dutch masterpiece instantly. So I can't have it. But I bet you Kylie can.

After all, in 2016, Kylie had a brief Spring/Summer phase when she tried to bring back Von Dutch. She posted at least three selfies in various items from the brand that garnered attention on social media. These days, nostalgia is all the rage (hello, The Hills is coming back and Gigi Hadid is wearing bell bottoms straight out of old Mary-Kate and Ashley Olsen movies!), so I can imagine Kylie and Travis bringing back the look with glee. In fact, I really bet you baby Stormi has a Von Dutch onesie. And I'm most jealous of that.

Read on to see Travis and Kylie in Von Dutch, and even shop a few statement truckers for yourself!

Celebrity Instagrams
Exclusive: Here's the Underwear You're About to See on Rihanna's Savage x Fenty Runway
by Sarah Wasilak 2 days ago

Dua Lipa
Dua Lipa Just Wore Pants With a Front Cutout, and the Trend Has Officially Gone Too Far
by Yerin Kim 2 days ago

Celebrity Instagrams
If You're Not Following the Cast of Sex Education on Instagram, Then What Are You Doing?
by Emily Weaver 1 day ago