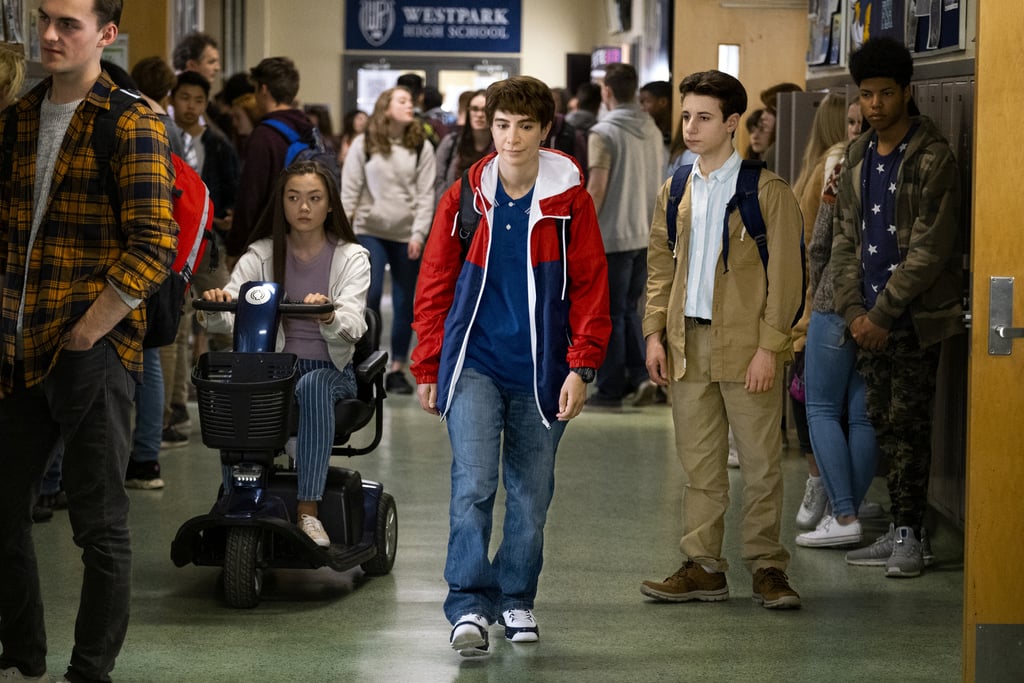 New TBS comedy Chad is about the trials and tribulations of a 14-year-old boy who's trying to fit in at school. But when you look closer, you'll quickly realize that something's a little different about the title character. Mainly, he's not a 14-year-old boy at all — he's a 39-year-old woman. Played by SNL veteran Nasim Pedrad, who also conceptualized the show and created its lovable cast of characters, from Chad's idol Reid (Thomas Barbusca) to his single mom Naz (Saba Homayoon), Chad is anything but ordinary.

We'll admit, it's a tiny bit absurd watching Pedrad work her comedy magic to bring an awkward adolescent to life, but that's kind of the whole point of the show. According to costume designers Amanda Needham and Adejoké Taiwo, the idea wasn't to completely fool viewers into thinking Pedrad was an actual young boy, but create that likeness so that the audience could get lost in the story and simultaneously feel like they were in on the joke. "It's an adult bringing the point of view of a teenager after growing up," Needham tells POPSUGAR.

Here, we talked to Needham and Taiwo about what it was like dressing a full-grown woman as teenage boy, the biggest trends of the moment, and how the immigrant experience played a part in the costume design.

POPSUGAR: Dressing a 39-year-old woman as a 14-year-old boy is a pretty Herculean task. What was your biggest challenge?

Amanda Needham: Well, we wanted to obviously compress [Pedrad's] lady parts, but sometimes, you still get a bump, or you get a sports bra line. You want to submerge people in the storyline, but if you see the bra, it takes you out of it. Being a designer, you have a higher sensitivity to it. So it was really about just trying to create comfort and reduce those lines that you'd see.

Adejoké Taiwo: That was a problem when we were shooting — if we saw the [bra] line or if the garments were lighter colors. We really had to be cautious with that.

PS: How did your previous work on other TV shows help prepare you to dress Pedrad?

AN: We created our own special types of undergarments to help flatten her out. I had some experience working on Portlandia with Carrie Brownstein, and she played a lot of male figures. But what happens with a lot of the foundation pieces is that, especially if you're wearing them for long periods of time, you start to lose feeling in your body because everything is so tight and compact and doing what it's meant to do, which is compress the lady parts. This was a challenge, so we created our own and engineered it to offset [Pedrad's] breasts with padding underneath. It was basically an insert for her breasts to help make her more comfortable, but still have the clothing do what it needed to do.

PS: You pretty much nailed the dorky look. How did you go about creating Chad's uniform?

AT: You'll notice that he always wears oversize polo shirts, no-name sneakers, a big watch, a backpack, baggy jeans . . . he's not wearing Supreme, he just wants to blend in. It's not anything super fashionable, but it's not outwardly dorky either. And the bagginess helped hide the fact that the character was played by a woman.

"The bagginess helped hide the fact that the character was played by a woman."