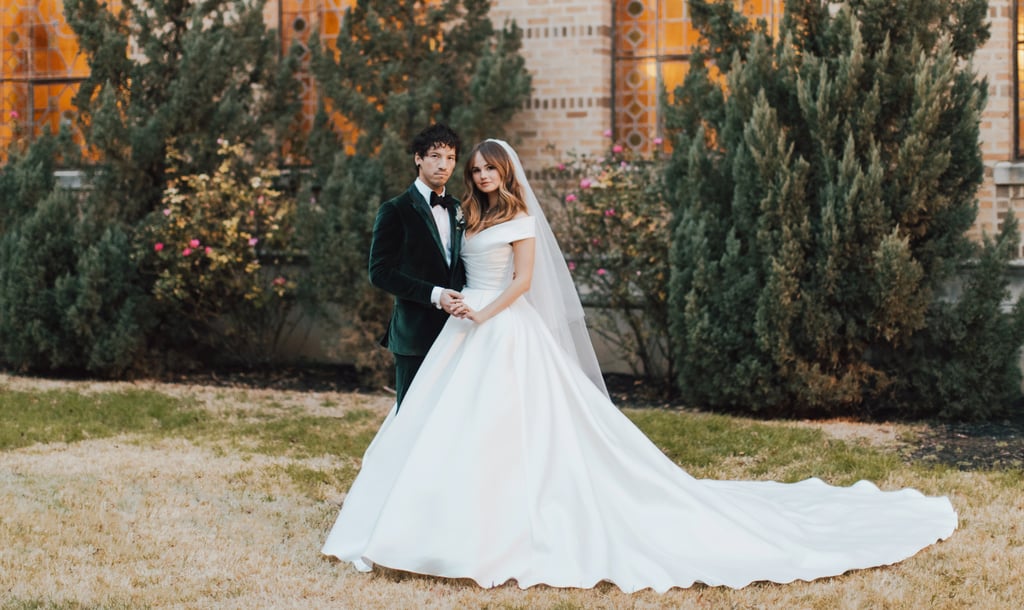 Surprise! Debby Ryan and Joshua Dun are married, and wait till you see the bride's gorgeous wedding dress. The gorgeous couple gave Vogue the exclusive first look at their dreamy wedding photos shot by Logan Cole, and Debbie wore not one, but two stunning wedding dresses for her big day. The former Disney actress and Twenty One Pilots drummer were engaged for about a year before they planned their secret New Year's Eve wedding in about 28 days — how crazy is that? (Fans had already began to speculate that the duo had already tied the knot as Josh was seen wearing a wedding ring in his band's surprise music video, "Level of Concern.")

While walking down the aisle, Debby opted for a classic off-the-shoulder gown by Elie Saab which featured a long train. "The day the collection dropped on Vogue, I saved it," Debby said in the interview with Vogue. "For a long time, it was the only image of a wedding dress I had saved anywhere, and the only image in a folder titled 'wedding' on my phone." The groom opted for a velvet Paul Smith tuxedo paired with black Nike Cortez sneakers. For the reception, the actress switched into her second white dress of the night, a sleek slip dress. She styled the minidress with her mother's veil from the '80s, a pair of lace biker shorts, and white Nike Cortez sneakers to match Josh. Keep reading to see more from the beautiful wedding ahead.

Related:
The Most "Nontraditional" Brides in the Movies I Love — Who Needs a Wedding Gown?
Previous Next Start Slideshow
Debby RyanCelebrity CouplesElie SaabCelebrity WeddingsNikeWedding Dresses