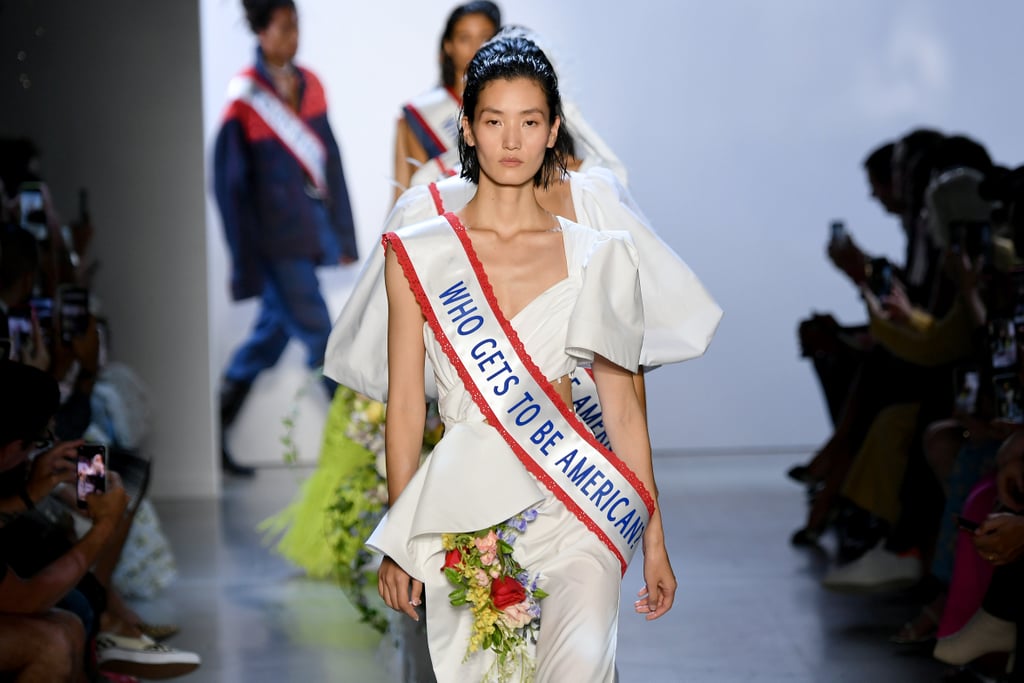 Prabal Gurung took us back to his spring 2020 show, where models from all backgrounds took the runway during the finale wearing sashes that read, "Who gets to be American?" Prabal, who is an immigrant, born in Singapore, has always taken heed of his platform as a fashion designer, weaving political narratives into his collections rather than shying away from the issues he and other minorities in our country face every day. When CNN used the above image from his 2019 NYFW show to bring attention to those in the fashion industry speaking up about the recent spike in hate crimes against Asian Americans during the COVID-19 pandemic, Prabal reacted by writing a long caption on his feed.

"After all aren't the perpetrators inflicting those pain either through their physical or verbal attacks and the rest by their silence, fueled by their own delusional claims of this land that they never owned in the first place and was actually stolen by their ancestors?" he asked, proving a point: racism is rooted in a long history of misunderstanding and built-up hatred based largely on destructive rhetoric oftentimes delivered by our nation's past leaders. It is a problem to be addressed everywhere, including through the mediums of art and design.

CNN's story includes videos posted by Allure Editor in Chief Michelle Lee and designer Phillip Lim, which encourage conversation about what it means to be actively antiracist, and a graphic you've hopefully already read through and shared on Instagram that lists horrifying statistics about the rise in violent attacks on the AAPI community.

Prabal followed up with another post, asking his followers to "commit to love" by building a community that stands against injustice. His message today is the same as it was on the runway in 2019: "a celebration of hope, courage, and progress towards a true American Dream that promotes equality and liberation for all — one that unifies us."

Scroll ahead to spend some time with the posts the fashion industry has brought to light during a week that normally centers on determining next season's clothing trends. Perhaps we should be thinking big-picture. Next season is hardly something to report on unless we hold ourselves accountable for the lifetime of unity that all Americans deserve.

Michelle Obama
Michelle Obama Responds to "Horrifying" SCOTUS Decision: "It Must Be a Wake-Up Call"
by Yerin Kim 8 hours ago