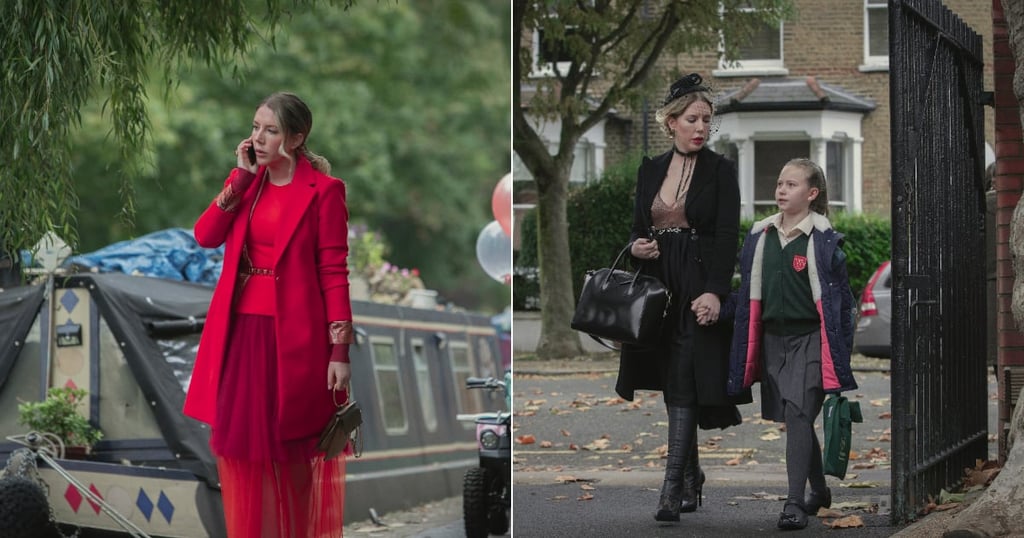 In The Duchess, Katherine Ryan Plays a Single Mom With a Beautiful Wardrobe — Here's Why That's So Important

Things you don't typically see being worn on the morning school run: ballgowns, funeral attire, and satin pajamas. Oh, and a sweater that says "world's smallest p*ssy" worn over the top of the most fabulous feather-hemmed pajamas. But that's exactly what we see Katherine Ryan wearing at the school gates in her new scripted Netflix series, The Duchess. The styling in the opening scene is just a slice of what's to come in the rest of the show and plays an important role in the narrative.

The Duchess is Katherine's first scripted series, which she not only stars in but also wrote and produced. The six-part, semibiographical series follows a single mom whose name is also Katherine (confusing, yes, but Katherine the comedian said she was "too lazy" to come up with another name, and honestly, fair enough) who lives in London and is on a quest to give her 9-year-old daughter, Olive, a sibling.

Separation, mother-daughter relationships, and modern parenthood are fundamental themes to the show — along with some hilariously crude one-liners. But there's one surprising element that is also central to the storytelling, and that's the styling. While the focus is predominantly on the fashion, Katherine's hair and makeup (think: embellished headbands and statement red lips) are also used to help portray Katherine's vision of being a single mom and modern parent in 2020 who is making her own rules. Keen to know more about the styling decisions on the show (and where to get that "world's smallest p*ssy" sweater), we sat down (virtually) with Katherine to talk all things The Duchess and power dressing.

One of the main reasons the styling works so well in The Duchess is thanks to the semibiographical nature of the show and the fact that Katherine brought her glam team of seven years onto the project. "I was adamant that I wanted to work with my team: my hair and makeup artist, Fiona Eustace, and my stylist, Jennifer MiChalski-Bray," Katherine told POPSUGAR. "We've developed this purposeful aesthetic to be rebellious and to be a language." In her personal life, Katherine is just as fashionable (though likely doesn't wear funeral clothes for school drop-off). "Jen did every single one of those outfits [in The Duchess] and this outfit [I'm wearing today] and anything you've ever seen me wearing. It was important to take my team with me into this project. I was disruptive and adamant about that happening. I don't even want to think about what The Duchess would look like if I didn't have Jen and Fiona."

The styling was also intentional in terms of how Katherine wanted a single mom to be portrayed — and that you can take care of a child on your own and look fabulous. "It's about women dressing with intention and powerfully and women dressing for other women. I think it was integral for this character to leave the house completely put together and authentic to her own artistry every day," Katherine said. "I'm so used to seeing single mothers who are messy and they're sad. I thought that the headpieces and the power dressing was so much a part of who she was."

In addition to the storytelling, Katherine was clear that she didn't want to bucket herself into being either "comedian or a glamazon." She said: "You could be both. I think a lot of times fashion is reserved for drama, and I wanted to see it in comedy." It wasn't just about making a point with regards to comedy shows; Katherine also wanted her show to be aesthetically pleasing. "I feel relaxed when I watch programs with a clean aesthetic and beautiful things," she said. "I don't apologise for loving beautiful things."

Keep reading to see some of Katherine's glamorous get-ups in The Duchess, which airs on Netflix from 11 Sept.