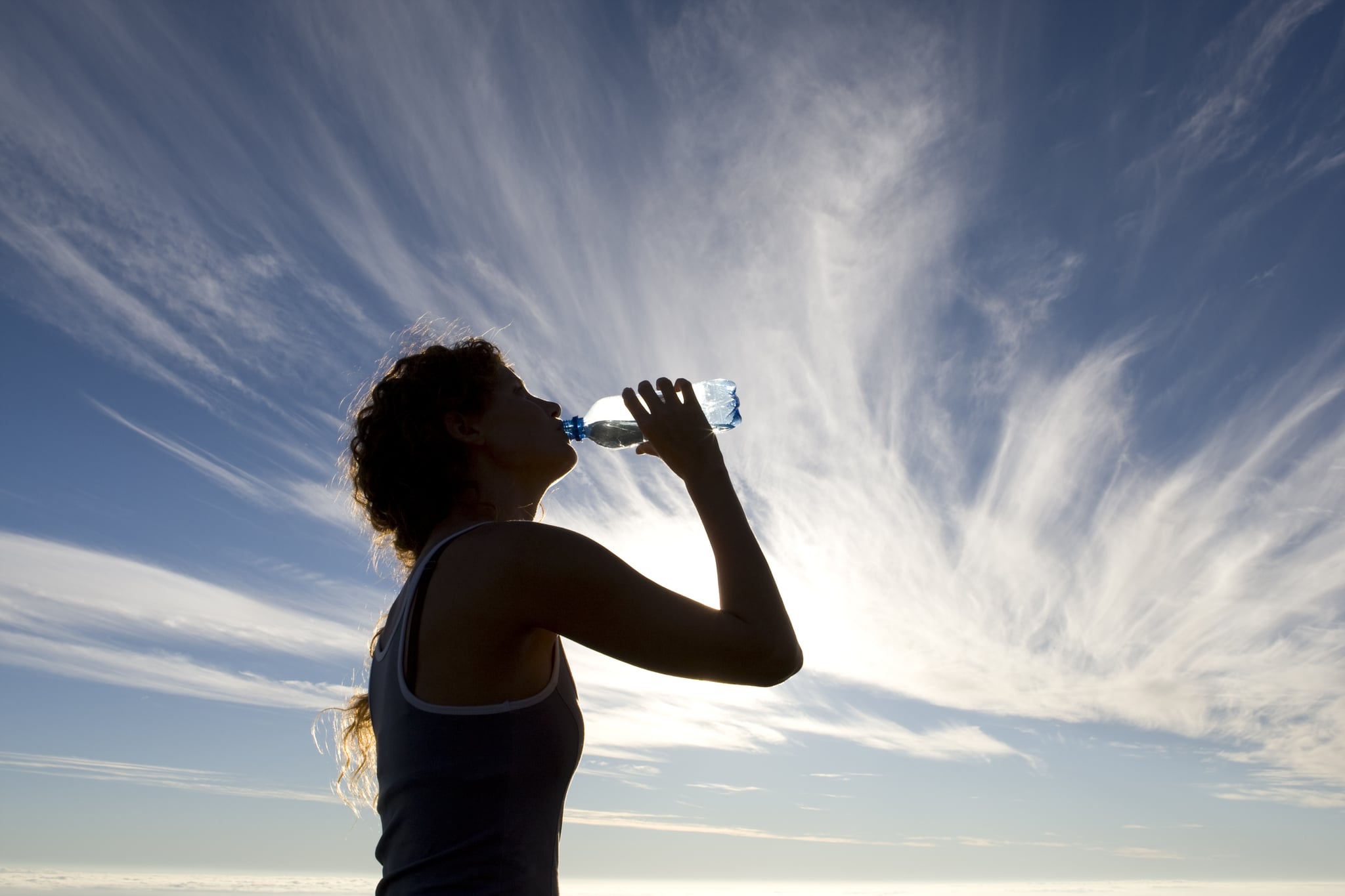 Are you thirsty? Though thirst isn't necessarily a bad thing, it is an early sign of dehydration, Natasha Bhuyan, MD, a primary care provider with One Medical, told POPSUGAR. We spoke to her and Paul Fenyves, MD, internist at Weill Cornell Medicine and NewYork-Presbyterian, about what you need to know when it comes to dehydration. Even though it can be easy to treat, dehydration can become severe. Plus, it's about more than just not drinking enough fluids.

Dehydration occurs when you don't have enough water in your body, or when you lose too much without replenishing it fast enough. "Your body attempts to conserve water however it can, whether by thickening your blood, preventing you from urinating, or pulling fluid from other places like tissue," Dr. Bhuyan said. Rapid fluid loss can result from diarrhea, vomiting, or sweating. Prescription medications that are classified as diuretics and cause increased urination, laxatives, as well as certain foods and drinks like alcohol, can also be culprits of dehydration, she said. She named HCTZ, a blood pressure medication, as an example of a diuretic.

Dr. Fenyves said that dehydration can occur, too, when your body doesn't have enough salt. "We need salt to hold on to our fluids," he said. That's why if people sweat a lot, losing fluids and salt, and they just drink water, the lack of sodium could still cause dehydration.

What Are the Symptoms of Dehydration?

Early signs of dehydration are increased thirst, less frequent urination, darker urine, and dry lips, mouth, and skin, Dr. Bhuyan said. Once dehydration becomes more severe, people may have difficulty making tears, feel dizzy, or get a headache. "If someone has severe dehydration, their heart rate increases, they may feel confused or get a fever, they will move slower than usual and have trouble walking, and they may have a drop in blood pressure or even pass out," she explained.

Lightheadedness upon standing due to a drop in blood pressure, called orthostatic hypotension, can occur, and tiredness or weakness are other typical signs, Dr. Fenyves added, noting that the symptoms are pretty general and might not show up at first. Fatigue, for example, could happen because of dehydration, a virus, or another reason. "It's all a bunch of non-specific symptoms," he said. But if you feel any of them significantly, see a doctor. In terms of treatment, Dr. Bhuyan said she would give a patient oral or IV fluids, then treat any underlying causes.

Related:
I Drank a Gallon of Water a Day For 3 Weeks (and Why I'll Never Do It Again)

For instance, Dr. Bhuyan said chronic mild dehydration has been linked to things like constipation and kidney stones. In addition, increased thirst and urination can indicate underlying diabetes, said Dr. Fenyves, who advised that if you're thirsty more than you think you should be, getting medical attention is a good idea. Diabetics and people with heart disease as well as older adults should be particularly wary of dehydration because their bodies aren't as resilient, he noted. Severe dehydration can also turn deadly if left untreated.

A Note About Heatstroke

Working out in excessive heat can cause dehydration since you're sweating profusely, but Dr. Fenyves said a lot of people that get sick from being in high temperatures experience heatstroke. "In order to maintain what's called homeostasis, for all of the different chemical reactions in your body to work, your body has to be in this small temperature range," he explained. Your body overheats, especially when it's humid, and your core temperature can rise to 104 or higher, he said.

You can certainly both be dehydrated and experience heatstroke in the heat, but the difference between the two is that while dehydration can be caused by sweating in the heat and therefore loss of fluids and salt, it can also be caused by diarrhea and vomiting. There are a number of causes, as we mentioned earlier. Heatstroke really is only caused by hot temperatures, and it can occur even if you're hydrated, Dr. Fenyves said. He used the following example: You wouldn't be able to go to Mars, where it's hundreds of degrees, and avoid heatstroke by drinking fluids.

How to Avoid Dehydration

Dr. Bhuyan said, typically, the "eight by eight" rule is a popular recommendation. This means drinking eight ounces of water about eight times per day, but this doesn't apply to everyone, and the the amount of water you should be drinking each day depends on your weight and health status. Dr. Fenyves stressed that he doesn't think you need to constantly worry about drinking water. "It's definitely not a rule that every time you pee it should look like a clear mountain stream," he said. "Your body can tell you when you need fluid by making you thirsty." Dr. Bhuyan, though, encourages her clients to stay hydrated even when they're not thirsty. Other tips from these doctors for avoiding dehydration, especially in the warmer months, include:

Related:
The Relationship Between Water and Metabolism Is Like Any Relationship: Complicated
Image Source: Getty / B2M Productions
Dehydration