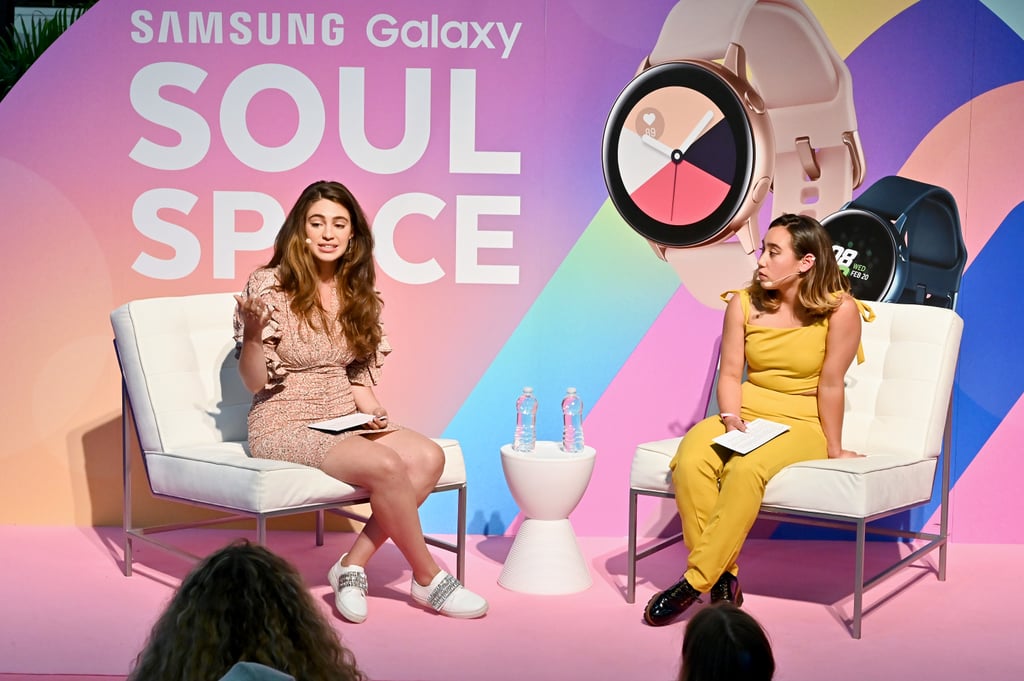 If there's one thing we know about life, it's that, through the beautiful moments, we'll be faced with obstacles both big and small. Getting past them takes strength and resilience — and two people who spoke at POPSUGAR Play/Ground on June 23 are true examples of this: Katelyn Ohashi, an Olympic hopeful turned viral collegiate gymnast you've seen all over your newsfeed this year, and bestselling author and poet Aija Mayrock. They're both young women; they're both creatives (Katelyn is working on her own poetry book); they both are imperfect, they admit, but have learned to find happiness.

Aija was bullied from the time she was 8 years old to age 16. She had a lisp and a stutter and, she said during a shared panel with Katelyn, "my classmates would tell me to kill myself and that my life was worth nothing." This persisted, and when it wasn't happening at school, it was happening online. She was body shamed and picked on for whatever the kids could think of — acne, hairy legs, you name it — and it even followed Aija when she moved to California at 13. "In my freshman year of high school, a girl who I had never met and went to my old school dressed up as me for Halloween with a sign around her neck and posted it online. It went viral." Death threats followed.

It's what Aija calls "mob mentality": one or two people start targeting someone and then, suddenly, everyone else jumps in and there's a snowball effect. "I didn't realize how deeply I was struggling with my mental health until I got out of it and I realized I was depressed," she shared. She also realized that she'd started to believe the things her classmates were saying over the years. Aija turned her experience into a book, The Survival Guide to Bullying: Written by a Teen, because she wanted to help others going through similar situations find their resilience.

Katelyn, too, was bullied at a young age in gymnastics. She was at the top of her game, a tremendously talented athlete. But, as we've written about in the past, she was body shamed and became increasingly unhappy. "Most of the bullying I experienced was from my coaches and that's when I experienced my unhappiness in the sport," Katelyn said. "I was told that it looked like I had swallowed an elephant and I looked like a pig. I was compared to a bird that was too big to fly." She agreed with Aija: "You do start to believe it, and then you start to become your worst enemy. You tell yourself the same exact thing that was so hurtful to hear."

"We're the biggest people we can invest in."

It took some time and soul searching, but both Katelyn and Aija were able to take back their joy. Katelyn has UCLA gymnastics in part to thank when she joined the team after stepping down from the elite level, recovering from a back injury, and relearning skills post puberty. Aija delved into her writing and found her voice. Katelyn discovered other interests that fed her soul outside of the gym — photography and poetry, to name a few — and both she and Aija revealed that it was discovering these passions that helped them learn to love themselves.

Katelyn said, "I think we're always told to fit into this box and do what other people expect of us and be what other people expect of us. What I've learned is that to really be successful is to love every single thing you do and to find joy in that, and I had to be really honest with myself and finally, for the first time, ask myself what it is that makes me happy." She added, "We're the biggest people we can invest in."

Aija admitted that she's still finding her confidence and her self-love: "It's a lifelong journey. I do think that the more I've found writing and performing and my love for storytelling, the more I've found that love for myself." So, her advice? Uncover what you're passionate about — what feeds your soul. It's these things that will get you through dark times and help build you up as a person. Doing what brings you joy, she said, is the "purest form of self-love."

"To anyone that is overcoming an obstacle, we've talked a lot about trying to love everything you do," Katelyn noted. "That doesn't mean it's always going to be fun." But working on finding those fulfilling parts of life will make the hardships easier to overcome. She closed with a quote that her mom always says — and it's a great action item: "Make one thing more beautiful every single day." That's the goal.