Before you start binge-watching a new show, you have to check out this graphic from Details that shows the effects of your TV marathons. 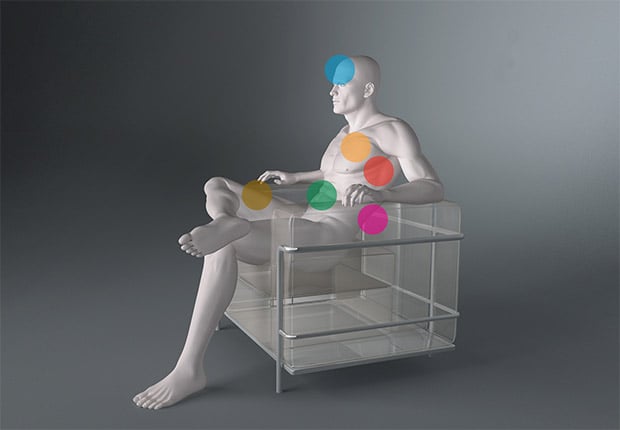 The problem: Sitting curves your spine into a C-shape, and keeping it that way too long can cause cramped and aching muscles and smushed organs.

The solution: Consider a recliner. It'll let your back keep the natural, better-for-you S-shape it has when you're standing, says Galen Cranz, a posture expert and professor at the University of California Berkeley.

The problem: You get soft. People who say they watch TV "very often" are 40 percent more likely than non-TV watchers to exercise less than one hour a week, according to a six-year study of more than 15,000 adults.

The solution: Use Game of Thrones (or, hell, The Bachelor) as motivation. Seeing someone fit on screen makes you more likely to want your body to look like his, says research from Boise State in Idaho.

The problem: You're a zombie (and not the badass Walking Dead kind). Researchers at Brigham and Women's Hospital recently found that a typical binge in front of fluorescent light (about four hours) before bed results in a harder time falling asleep, less REM sleep, and grogginess the next day, even after clocking eight hours. The culprit: The "blue light" TVs emit inhibits the release of melatonin, a hormone that helps you knock off.

The problem: Sitting shrinks your lung capacity by a third, so you get less oxygen, which causes a decrease in mental focus the second your ass hits the couch.

The solution: Sit in a chair with a pillow behind your lower back—a position that helps open your lungs.

The problem: Your ticker will stop beating sooner. An Australian study of national health records found that, on average, every single hour of TV watching after age 25 reduces life expectancy by close to 22 minutes.

The solution: Researchers have discovered little mortality risk for people who watch less than an hour a day. Pick a show that's a real mind-fuck (like Black Mirror), so you're more likely to need time between episodes.

Healthy Living
Mental Health Doesn't Discriminate: 10 Athletes Who Have Talked About Their Mental Illness
by Samantha Brodsky 6 hours ago

Healthy Living
There's a Global Movement to End Period Poverty, and Young Women Are Leading the Way
by Mara Santilli 1 day ago

Meal Prep
When It's Too Hot to Turn On the Oven, Here Are 30 Healthy Ideas For Meal-Prep Sunday
by Jenny Sugar 1 day ago

Camila Cabello
Camila Cabello Detailed Her Battle With OCD and Anxiety: "I Was Embarrassed and Ashamed"
by Perri Konecky 8 hours ago