Even though people have described being in a sensory-deprivation tank as "feeling like you're dying," they still seem to be considered one of the latest and greatest in fitness trends. In case you're wondering what it's really like but not ready to take the saltwater plunge on your own time and dime, check out this one brave woman's account in this post originally featured on The Cut. 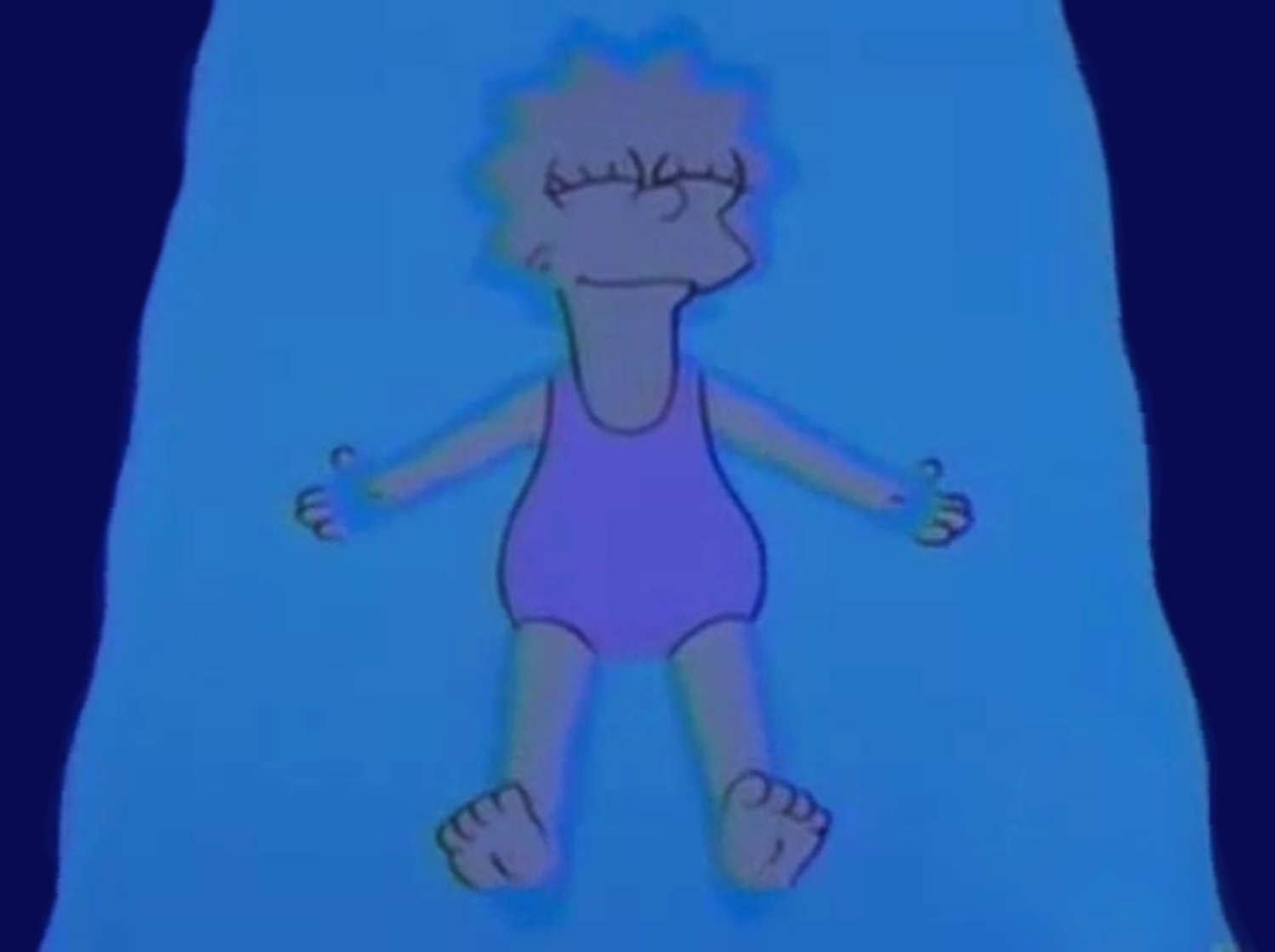 Before I visited Brooklyn's new Lift/Next Level "float spa," my entire understanding of sensory-deprivation tanks was limited to an episode of The Simpsons: In "Make Room for Lisa," Lisa Simpson floats in a coffin-size tub and hallucinates that she's entered the body of her cat, Snowball.

So, as I waited in the Lift/Next Level lobby, I was curious to read the non-cartoon accounts written in the spa's "guest book." Some visitors described experiencing intense relaxation, a state that was almost sleep but not. Some people said they'd hallucinated and had out-of-body experiences. The more colorful reports compared the experience to dying, being reborn, or dying and then being reborn multiple times in the hour. Some people wrote that it was just better than taking a crapload of MDMA-spiked shrooms. Most thanked the Universe for the life-changing hour — and the saltwater for softening their skin.

These all sounded like ringing endorsements to me. I'm a fan of Brooklyn trends with New Age roots (see also: crystals, tarot), and before they floated off into relative obscurity, the benefits of sensory-deprivation tanks were widely lauded ("Float the pounds away!" "Find God!" "Most people liked it!") if not totally scientifically grounded. The first commercial "float spa" opened in 1979 in Beverly Hills, California, a few years after the inventor Dr. John C. Lilly developed the first consumer-friendly tank. It was called "Samadhi" — Sanskrit for higher consciousness.

The modern incarnation I encountered was a Zen-like space in Cobble Hill, where you must take off your shoes and everybody whisper-speaks peaceful things at you before you begin your journey. My journey, I was whisper-told, would start in one of the spa's "Ocean Float Rooms," as opposed to the claustrophobia-inducing coffinlike pod that most people think of when they imagine a sensory-deprivation experience. (Thanks, The Simpsons.)

Ocean Float Rooms, the attendant whisper-boasted, were better for first-timers. The rooms have six-foot-high ceilings adorned with twinkling LED constellations; I'd be able to stand up fully. In practice, this meant something like a liquid-filled mausoleum — a small, enclosed watery space that was still reminiscent of a container for dead people. The attendant whisper-instructed me to get naked, take a shower, put Vaseline on any open wounds, and prepare to float my way into samadhi.

And then I was alone. Naked, scrubbed clean, wounds lubed, facing the little white entryway that led to the Ocean Float Tank. It looked like the door to a kiln, or a wood-fire oven. I wondered: What awaited me on the other side during my hour of floating? What would I discover when stripped of all sensory information?

Initially, what I discovered was where exactly all my unhealed cuts were: Nothing like a thousand pounds of Epsom salt mixed into ten inches of water to remind you of that blister on the back of your foot. Once I was situated — an inflatable neck pillow supporting my head, the water cradling my floating body like a warm-liquid Barcalounger — I tried to focus on my breathing and the LED stars. At first, all was well. My body floated around like a little buoy. I felt like I was headed someplace spiritual, someplace deeper. I decided to turn off all the lights and enter full sensory-deprivation mode, which is when things started to go to hell.

Lying in the darkness, I couldn't see anything. I couldn't hear anything save for my own breathing and the drip of the tank's filter system. I adjusted my leg, flooding another cut with saltwater, and suddenly all I could focus on was an intense burning spreading through my ankle as the saltwater entered the wound. Is this sepsis? I thought. Will I get sepsis? What is sepsis, even?

Then a little bead of saltwater rolled into my ear and I started to panic. My whisper guide had pointed out some vinegar that I was supposed to use to flush my ears in case saltwater got into them and I hadn't asked what would happen if saltwater did remain in my ear. Now I was having a flashback to some girl at camp when I was 10: She'd gotten river water in her ears and for whatever reason it made her barf every day. They took her away to the infirmary, and we never saw her again. Was I going to die barfing? And is this what it would have felt like to be ON THE TITANIC???

I started thinking about how many thoughts my brain was able to form in mere seconds. A voice from somewhere else in my brain started commenting on those thoughts, and judging me for not being able to stop thinking them, thereby forming more very loud thoughts. I couldn't figure out how many minutes or hours I'd been in the tank, and that's when I realized there was no panic button in here, and everything became a jumble of death-barf-panic-sepsis-what-is-sepsis thoughts. Somewhere, from the depths of my consciousness, a voice rolled forth like Simba's father parting the clouds in The Lion King.

"Allison," it said. "You are better than this. You once took hallucinogenics, walked down Flatbush Avenue in broad daylight, and maintained. This, you can do."

And then I discovered how to find peace and calm in a situation that feels very much like dying.

2. Sing yourself a song from your favorite album. Unfortunately, the only song I could sing in totality was that new The Weeknd song "Can't Feel My Face," which was a little too on the nose — I'd reached a stage where I literally couldn't feel my body or tell if my eyes were opened or closed. I was angry at myself for being so clichéd.

3. Focus on those weird patterns your eyes make when trying to adjust to darkness. While lying in the dark, I could see all these purple bursts of color — they felt like they were in my eyeball, man. I was convinced I was watching my neural pathways work, and that those neural pathways were connected to galaxies, and we're all just one with the universe, really. Things got real deep.

4. Fall asleep. Which I think I did? Though I also could have been in some semi-asleep, semi-awake state. My spirit also could have left my body, traveled the universe, seen the future and past, and returned to me with a deeper emotional knowledge. Who knows? But I was very calm and had some intense visions.

I was in the middle of a vision in which my boss was waving a broom and yelling at me with my mother's voice. (Perhaps the spa should also offer on-site therapy because that was weird.) Vision-boss dropped the broom she was holding, and the clatter — which turned out to be wind-chime music being piped into my tank — jolted me back into my body. My hour was up.

I turned on the light, snapping back into semi-consciousness in the harshest way possible. (I now feel bad for newborns.) I showered again, enjoyed a glass of cold water, whisper-bid the Lift spa employees farewell, and entered the real world again. I felt like I'd smoked a huge joint or taken a sociable amount of mushrooms, but either way, everything was weird and wobbly.

Before entering my Ocean Float Room, I had been told that the experience would heighten my senses: The world would seem more vibrant, so I should think carefully about what I wanted to see, feel, hear, taste, and feel immediately after leaving. If I had it my way, I'd have eaten pizza and had sex, but sadly, it was a workday. I biked off into Brooklyn, which smelled extra like pee.