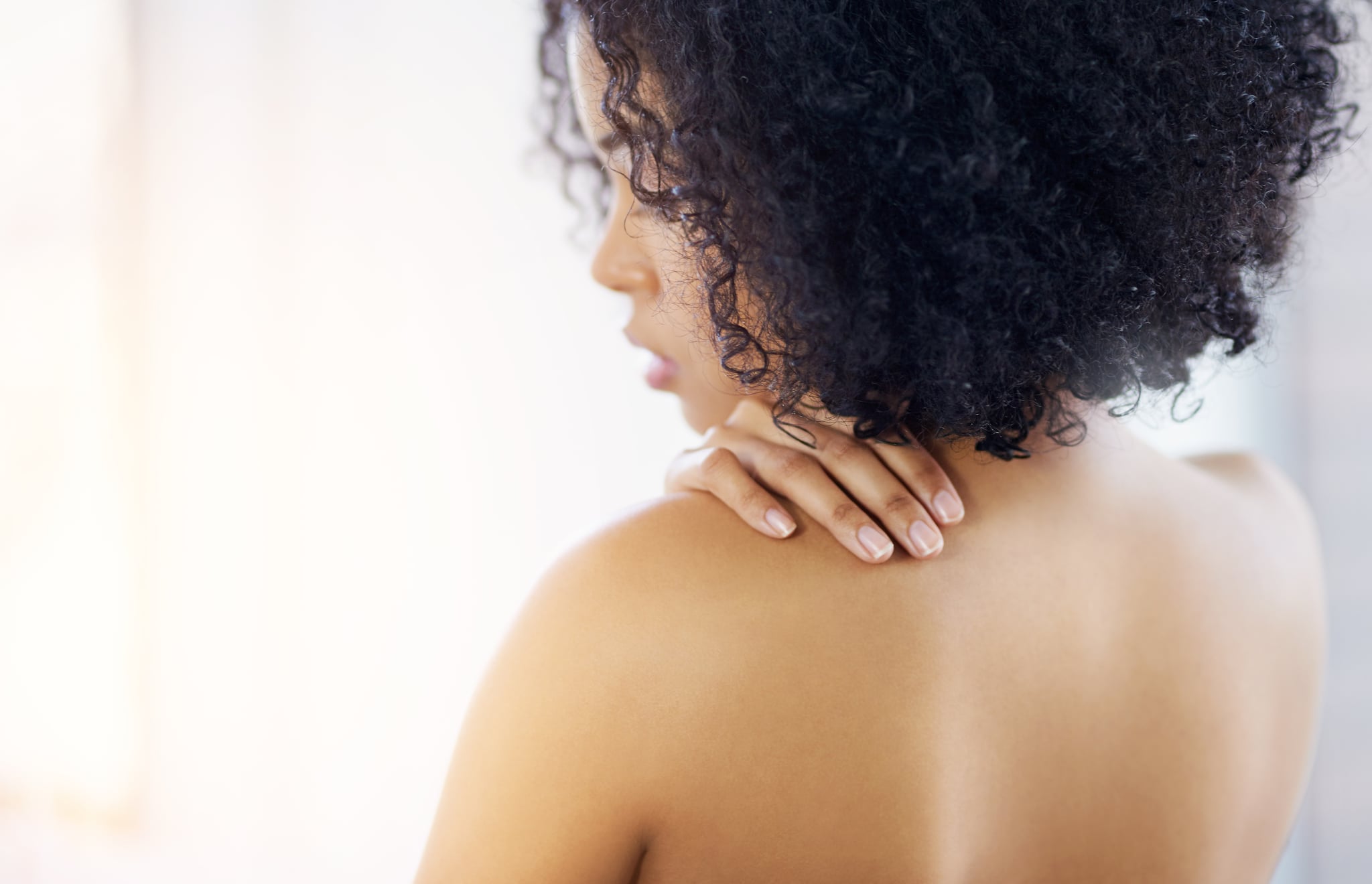 The pink-ribbon movement has raised billions of dollars for breast cancer research, leading to developments in screening and treatment that have saved countless American lives. Over the past 30 years, breast cancer-related deaths have declined by more than 40 percent, according to the Breast Cancer Research Foundation. But despite these gains, Black women are 40 percent more likely to die from breast cancer than their white counterparts.

When caught early, the prognosis for breast cancer is typically very good — but Black women are often diagnosed at a younger age, at a later stage, and with more aggressive tumors, explained Monique Gary, DO, FACS, a breast cancer oncologist and medical director of the cancer program at Grand View Health in Sellersville, PA, and Touch, The Black Breast Cancer Alliance. "A lot more needs to be done to see why breast cancer affects Black women more severely."

How the System Has Failed to Protect Black Women

But in order to undergo treatment, you first have to be diagnosed, and that in itself is a challenge. Because younger and younger Black women seem to be getting breast cancer, their concerns might be dismissed by doctors who believe they're "too young" to have it. There's also the issue of getting screened when mammograms typically aren't recommended until age 40, and the Affordable Care Act doesn't usually require insurance plans to cover the procedure before then. Research has also found that Black women tend to have denser breast tissue, which means tumors can be more difficult to spot in a regular mammogram. For this reason, they may require more advanced screenings, such as an ultrasound or MRI. Because these are often not covered by insurance either, this may delay the diagnosis further. Breast density may also increase cancer risk for reasons that aren't entirely known.

Related:
The Black Cancer Podcast Centers People of Color Because "Your Life and Trauma Matters"

In fact, there's a lot that's still unknown about Black people's risk for breast cancer and the disparities that exist. Black women under 45 have higher incidence of breast cancer than younger white women — and while genetics could play a role, according to Dr. Gary, they are no more likely to have hereditary markers like the BRCA1 or BRCA2 mutations. Historically, she added, Black women haven't been offered enough genetic testing, which creates a gap in understanding of their genetic predisposition to cancer or lack thereof.

"Even if you take poverty and access to care out of the equation, there's still a gap in diagnosis . . . We cannot underemphasize that racism is a public health issue."

Dr. Gary explained that while there are lifestyle factors that can contribute to breast cancer risk — including lower rates of breastfeeding, which tends to occur in Black communities — there are socioeconomic factors at play, too. These include barriers to accessing top-quality screening, comparable and appropriately aggressive treatment, and reconstructive surgery options, whether they're physically or financially out of reach. However, "even if you take poverty and access to care out of the equation, there's still a gap in diagnosis," Dr. Gary told POPSUGAR. "Black women are diagnosed at a later stage and have a higher mortality. We cannot underemphasize that racism is a public health issue."

She added that while cancer risk can't be attributed solely to racism, it's important to note that this is a systemic problem. Systemic racism in healthcare perpetuates inequality, Dr. Gary explained — and many of those biases and microaggressions persist today, often unintentionally, throughout training programs and into practice. Black patients may feel overlooked or fearful of receiving inadequate care. And the heightened sense of danger Black people feel while just going about their lives inflicts stress on the body over time. Stress has been linked to depression, chronic inflammation, and insulin resistance — all of which which have been linked to cancer, Dr. Gary said. "That stress from chronic racial injustice creates an unfavorable environment for optimal health."

When Survival Is an Act of Resistance

Jasmine Souers was just 25 when she started experiencing breast swelling and discharge. Her grandmother had survived breast cancer twice. Yet when Souers initially asked for a screening, the hospital turned her away. (She would later learn that she did, in fact, have no known gene or genetic mutation that put her at increased risk.) Eventually, after a mammogram and ultrasound both came back negative, a primary care physician told Souers that she most likely had an infection, as she was "too young" for breast cancer. She wasn't — Souers's ob-gyn sent her to a breast surgeon, who using an MRI, detected multiple tumors across nine centimeters, the largest being a stage I tumor. By then, months had passed since those initial symptoms. It took a bilateral mastectomy, reconstruction, and radiation for Souers to reach the "survivor" stage.

About a year earlier, at the end of 2015, Marissa Thomas's primary care provider found a lump in her left breast. She and her doctor brushed it off because she had been working out more and thought she could have pulled a muscle. Thomas didn't have a family history of breast cancer, specifically — though she does have a genetic mutation called Lynch syndrome, which typically predisposes people to colon cancer — so a diagnosis seemed unlikely, given she was only 35. Two weeks later, Thomas felt the lump again and sensed that something was wrong. She had a mammogram, ultrasound, and biopsy within days that confirmed her suspicion: stage II breast cancer. Her treatment involved a lumpectomy, chemotherapy, radiation, and two reconstructive surgeries. 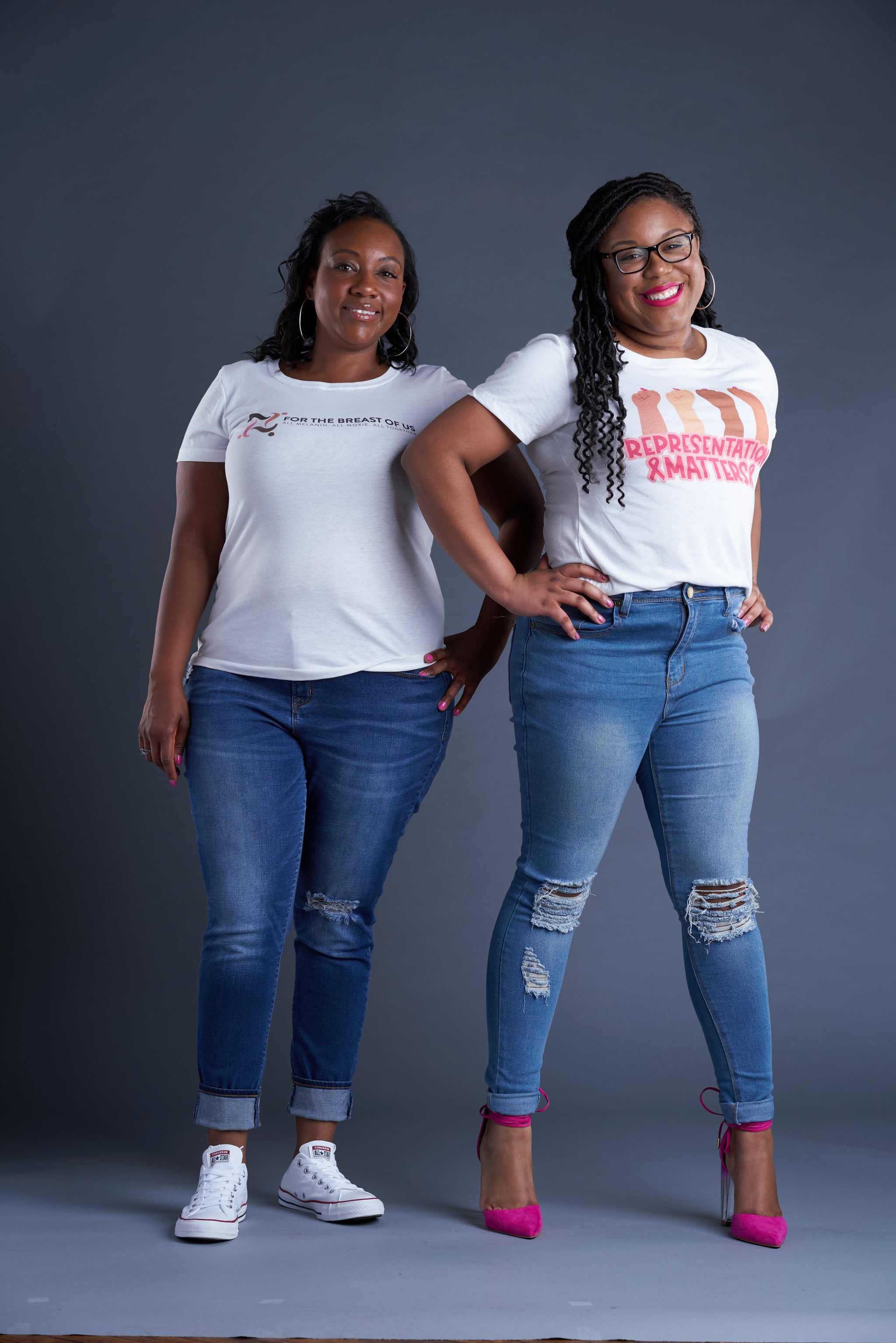 Image Source: Jay Marable PhotographySurvivors Marissa Thomas (left) and Jasmine Souers (right) founded For the Breast of Us, a digital community for women of color at all stages of breast cancer.

Throughout their journeys, Souers and Thomas tried to forge connections on social media with other people going through similar experiences. "Being a young survivor and Black survivor, I have dual citizenship in communities that are very underrepresented and overlooked," Souers told POPSUGAR. The two women initially connected on Instagram, while living on opposite sides of the country, and finally met in person in 2019 at a Young Survivors Coalition. They founded For the Breast of Us, a digital community for women of color that welcomes people at all stages of breast cancer, from previvors to those with metastatic breast cancer.

There's been little visibility of Black breast cancer survivors, something Souers and Thomas are working to change through their blog, Twitter page, Instagram community, and private Facebook group, Breast Cancer Baddies. "It's not that there are not a lot of Black women survivors — there are — it's just that their stories are not being told," Thomas said. "In a sense, we are digging up women who have been in the shadows for so long."

The founders explained that the people who interact with For the Breast of Us not only have a supportive coalition of fellow warriors, but also the agency to tell their story in the way they choose. Recently, they've started the Naked Truth Project, to shed light on what scars look like on melanated skin. This is just one way to elevate all women of color affected by breast cancer and care for their mental health in the face of a healthcare system that has historically not supported them.

Related:
25 Mental Health Resources Created For the Black Community You Should Know

What Needs to Change to Save Black Lives

Meaningful change will require the medical community to be anti-racist. In her advocacy work, Dr. Gary collaborates with survivors and advocacy groups to help repair the relationship between Black women and the medical establishment. She encourages Black women to participate in clinical trials and research collaboration with physicians in academia, as well as within their communities. Dr. Gary explained that many Black women are more likely to seek care at a community hospital rather than a large cancer center, where they might not feel as welcome or may not trust that their insurance will be taken. It's essential then that care, including clinical trials for more aggressive cancers, be offered to them either at local hospitals or at larger hospitals, with transportation provided.

It's equally important that Black patients be offered the same consultations as white patients — something that will require doctors to fight against their own biases. Research shows that Black women are less likely to have reconstructive surgery after a lumpectomy or mastectomy, often because it's assumed they won't have access to a plastic surgeon or that their insurance won't cover it. Souers and Thomas explained that this is also where spaces like For the Breast of Us can play a role, by educating people who have just received a breast cancer diagnosis about the latest developments in treatment options or how to find oncologists or surgeons who are also people of color.

Research is also key to better understanding and treating Black breast cancer — but that means Black people need to be better represented in breast cancer research. "Ideally, the goal would be to increase studies with representative samples, but due to how issues of race have historically led to poor treatment of Black people or inappropriate types of research, there may be distrust when it comes to participation in research studies," Dr. Albright said. That distrust is founded, and it's work like that of Dr. Gary and Dr. Albright that can help Black women gain trust in the medical system. 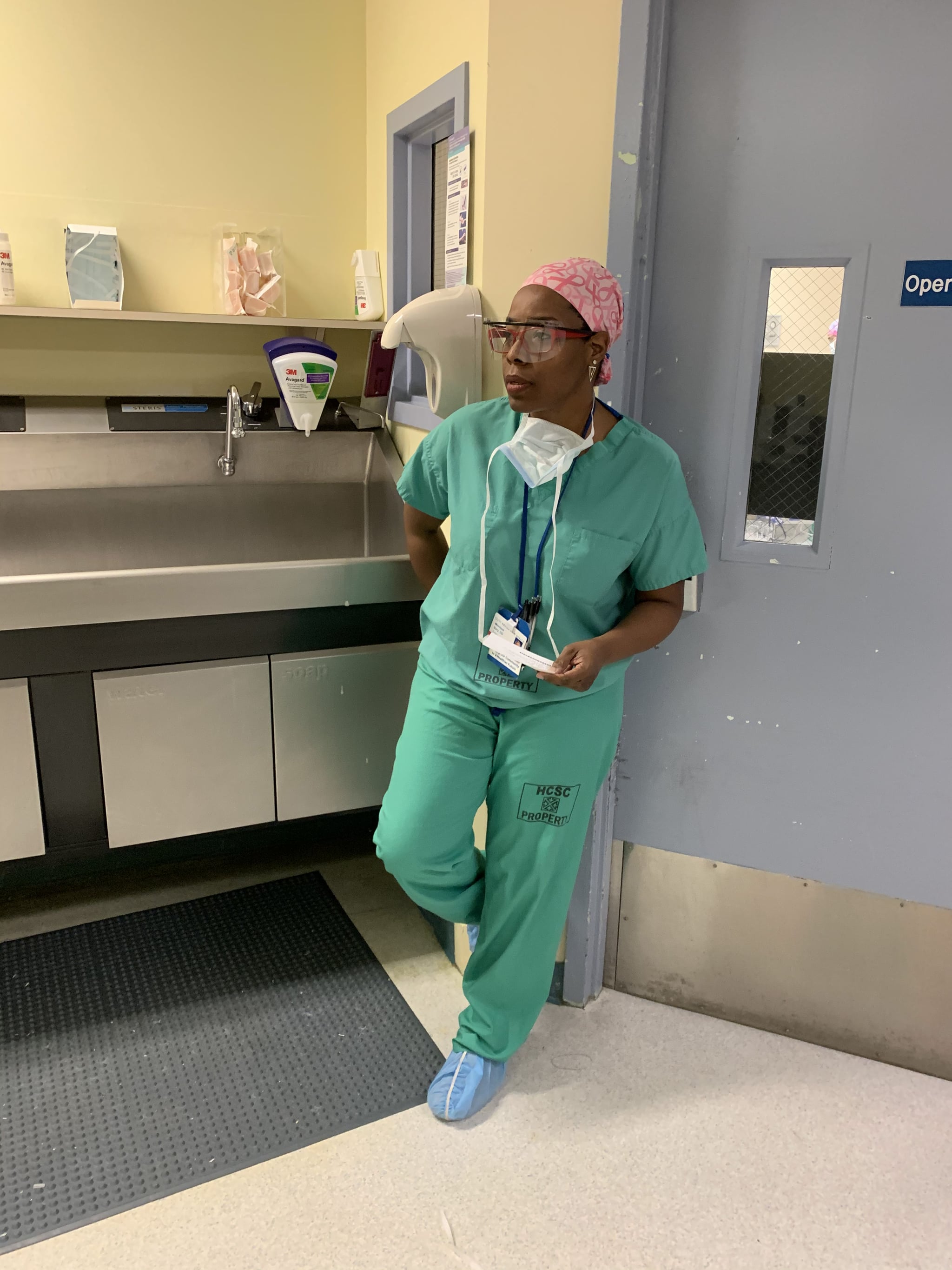 Of course, prevention and early detection are just as essential in tackling these disparities. While there are programs aimed at expanding screening — for example, the medical technology company Hologic has partnered with Black Women's Health Imperative and radiology nonprofit RAD-AID to make screening and imaging more available to low-income and marginalized communities — doctors should also discuss risk factors and preventative measures with their Black patients.

"We've spent a lot of money on breast cancer 'awareness,' but Black women have been dying in plain sight for years."

Dr. Albright offers screening to her patients starting at age 40, but she also talks to Black women about their increased risk for triple negative cancers, which could occur earlier. She encourages them to get to know their breast tissue through regular breast self-exams. "I emphasize the importance of breast self-awareness so women can tell if something is out of the ordinary," Dr. Albright told POPSUGAR. If there's enough of a focus on properly educating Black women on their risk factors and the steps they can take to protect themselves, it could lead to earlier diagnoses.

A month dedicated to raising consciousness about breast cancer is important, of course, but taking consistent action to make sure Black people are represented, advocated for, and accommodated is the only way to safeguard their health. "We've spent a lot of money on breast cancer 'awareness,' but Black women have been dying in plain sight for years," Souers said. Changing that is long overdue.

Health
The Low-Oxalate Diet Isn't For Everyone, Experts Say. Here's What to Know.
by Korin Miller 2 days ago