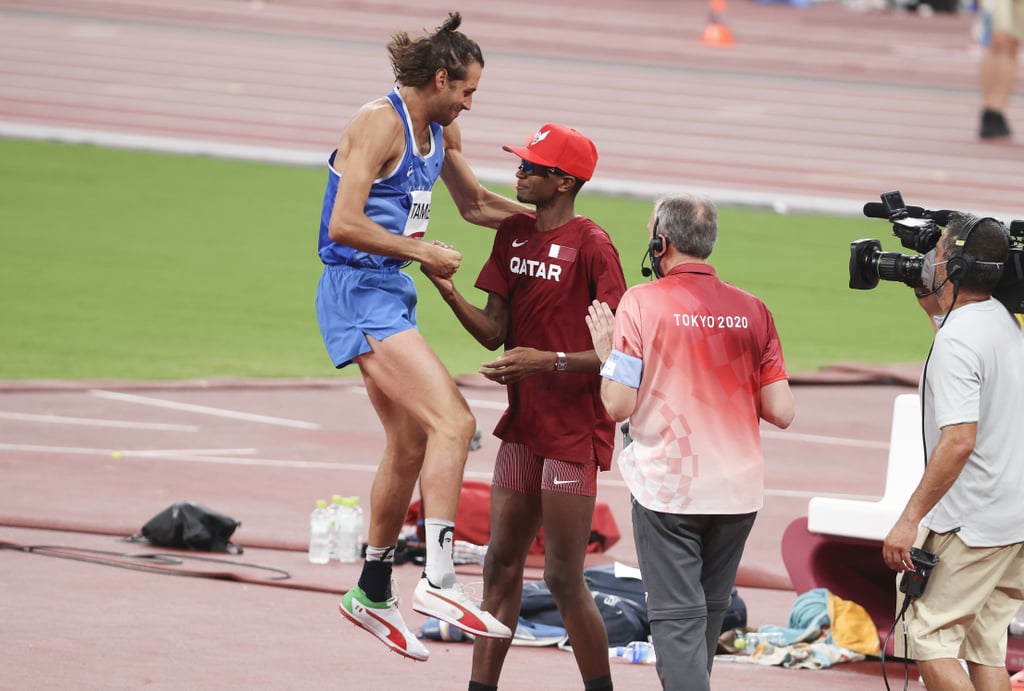 Italy's Gianmarco Tamberi and Qatar's Mutaz Essa Barshim have officially reached new heights in their friendship. Over the weekend, the longtime rivals and friends competed for the gold medal in the men's high jump competition at the Tokyo Olympics, and it ended in a way that no one could've predicted. The two athletes cleared the high jump at 2.37 meters and both missed the bar at 2.39 meters after three attempts, so instead of competing in a jump-off to determine who would win gold and who would win silver, Tamberi and Barshim agreed to share the gold medal. The Qatari athlete was heard asking an official "Can we have two golds?" amid the emotional moment. (Because we know you're wondering, 2.37 meters equates to 7 feet, 9 1/4 inches.)

It's unusual for a tie like this to happen during the Games, and it's the first joint Olympic win since 1912, but it's without a doubt the ultimate display of sportsmanship. Tamberi and Barshim go way back, and their friendship-slash-rivalry stretches beyond the track. According to USA Today, the two met at a competition in 2010 and have maintained their friendship since. They're there for each other during major life events, like weddings, date nights, and even injuries. Right before the 2016 Olympics in Rio, Tamberi broke his ankle and was unable to compete in the Games. Not only has he kept his cast, but he wrote "Road to Tokyo 2020 2021" on it and brought it out as he celebrated his gold-medal win. Barshim endured a similar injury two years after Tamberi's, and Tamberi was there to support him emotionally.

"He is one of my best friends, not only on the track, but outside the track," Barshim said. "We work together. This is a dream come true. It is the true spirit, the sportsman spirit, and we are here delivering this message." Check out photos of the emotional moment Tamberi and Barshim both won the gold medal.

Related:
No One at the Olympics Cheered Harder Than Simone Biles When MyKayla Skinner Medaled
Previous Next Start Slideshow
Summer Olympics 2021OlympicsSportsTrack And FieldAthletes