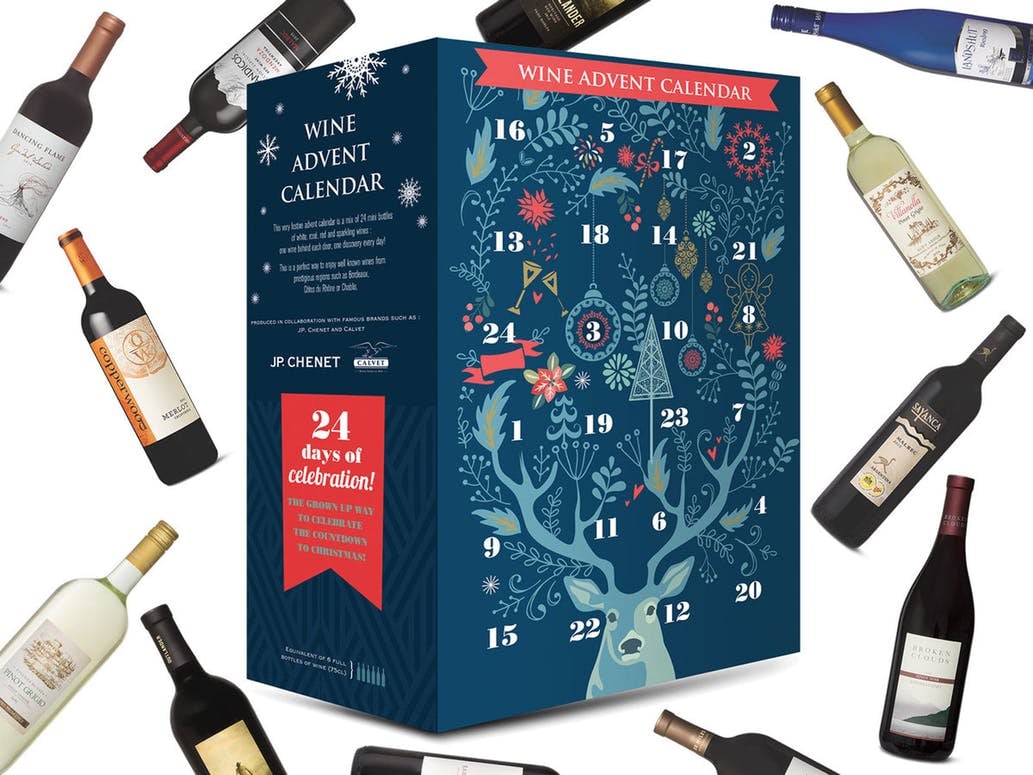 It's truly never too early to get psyched for the holiday season, and Aldi just gave us a major reason to start counting down the days already. Word around town is that the affordable grocery store chain is releasing a freakin' wine advent calendar, and — OMG — we're officially never going back to those basic chocolate-filled advent calendars ever again.

The Sun reports that the giant boozy masterpiece is filled with 24 mini bottles of reds, whites, Rosés, and bubblies, all of which total the equivalent of six full bottles. Heck, yes! The festive wine-filled calendar, which is decked out with the cutest holiday-themed illustrations, will be available starting Nov. 1 for £49.99 (or roughly $67). That sum may seem steep at first glance, but it's actually pretty darn cheap when you remember that you're getting six bottles' worth of wine.

There is, however, one major catch to this glorious news: Aldi's boozy holiday calendar will unfortunately only be sold in the UK, according to The Sun — dang it! But considering how obsessed we are with Aldi's legendary $8 Rosé, we'd wager to say this one's worth taking a trip over the pond for. Early holiday vacay, anyone?

Food Reviews
The Results Are In! And the Best Spiked Seltzers For Summer 2021 Go To . . .
by Haley Lyndes 12 hours ago

Product Reviews
As a Serious Ice-Cream-Lover, Nick's Ice Creams Is Becoming My New Go-to Treat
by India Yaffe 2 days ago

Food News
PSA: You Can Get a Free Beer If America Reaches President Biden's July 4 Vaccination Goal
by Haley Lyndes 3 days ago