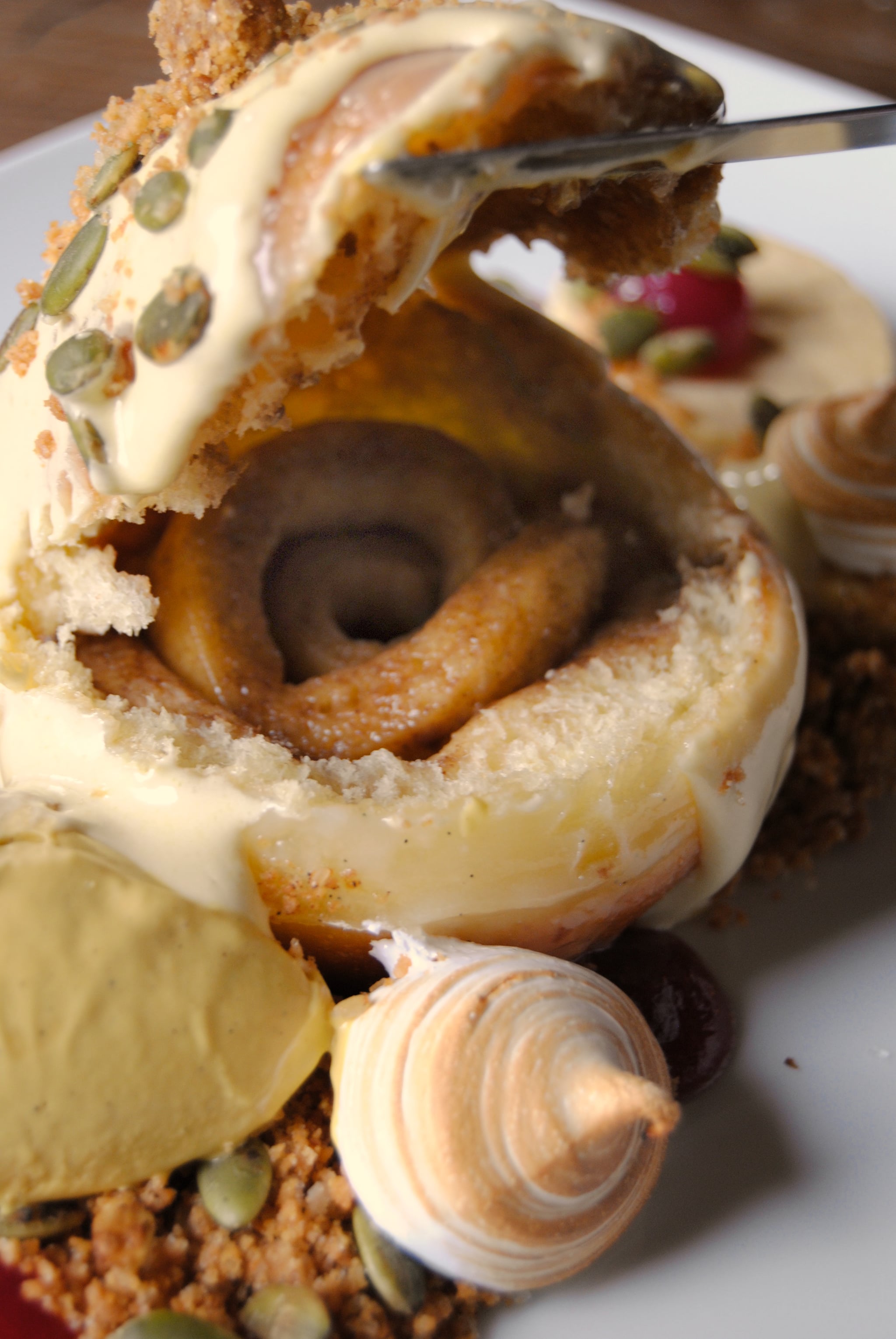 The cinnamon roll doughnut, which has been on Catch's menu for at least three months now, is topped with a pumpkin sabayon and served with pumpkin ice cream, whipped meringue, and a raspberry pomegranate jelly. Chef Beatty said the restaurant started working on this dish back in about October, when Pastry Chef Thiago Silva got the idea from an apple doughnut he had created. Chef Silva said he wanted a doughnut that felt like Fall, so he and the pastry department went with cinnamon and pumpkin.

"The leaves were falling, the weather was changing, so we wanted something nice and warm and full of flavor but a little bit fun, and that's where the idea started," Chef Beatty said. And though the dish was always planned as this particular idea of a cinnamon roll inside a doughnut, it went through several variations before becoming what is currently on the menu.

After seeing the intricacy on the plate and tasting the incredible marriage of flavors, we were sure the dish took detailed process to create. Chef Silva told us the preparation process is similar to how he used to make ravioli. "We would freeze the logs of cinnamon rolls, cut them, and would sheet the doughnut dough real thin, almost like pasta," he said. He would then lay the cinnamon rough dough on the doughnut dough and cover those layers with another doughnut dough layer. He would cut them to shape, let them proof, and then fry, allowing the entire pastry to cook together.

"It's a long, detailed process," Chef Beatty said. "We have chefs that oversee it every step of the way to ensure that it comes out consistently perfect each and every time. Warm, cinnamony, and delicious."

Chef Beatty's description is spot on as far as intricacy and taste are concerned. This cinnamon roll doughnut creation is an actual experience. We dissected the doughnut itself to get to the cinnamon roll inside before digging in. The pastry was light and sweet but felt more substantial than your morning doughnut. The pumpkin ice cream was lightly spiced and incredibly creamy. The jelly provided just a hint of tartness, but the real magic for me was the meringue. These little clouds were sweet and had a hint of something special in them that provided that sparkle on top of the doughnut.

We definitely recommend checking out Catch if you're in New York because not only is this dessert one to try, but the restaurant's constant desire to elevate classics provides a unique dining experience. The menu is full of innovative creations — like s'mores pizza. Simply amazing.

Food Shopping
Jeni's Dropped a Bunch of Breakfast-Themed Sweet Treats, Including Everything Bagel Ice Cream
by Karenna Meredith 1 day ago

Food Shopping
Costco Is Selling a Nearly 4-Pound Decadent Fudge Brownie, and I'm Ready to Inhale It
by Karenna Meredith 3 days ago

Food News
It Finally Happened: Joanna Gaines Gets the Full Spotlight in Magnolia Table — and Every Minute Is Gold
by Samantha Sasso 4 days ago