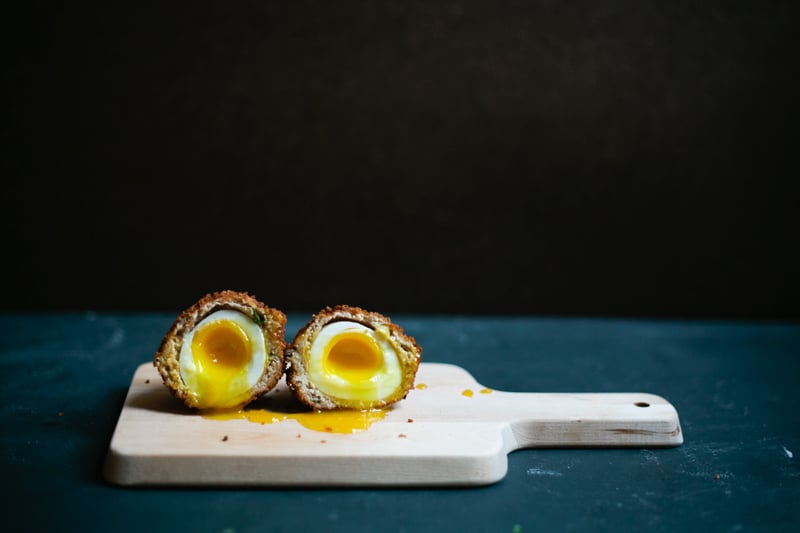 Gordon Ramsay shared his recipe for Scotch eggs "with a twist," and it's one you'll want to bookmark for later. Traditionally, a Scotch egg — like the Scotch egg from My Name Is Yeh, pictured above, is a hard-boiled egg wrapped in sausage and deep-fried with a crunchy breadcrumb exterior. Gordon's take on the recipe does involve traditional ingredients like panko breadcrumbs and ground sausage, but there is one surprising ingredient you wouldn't expect: black pudding. If you're unfamiliar with black pudding, it's a type of blood sausage that's common in parts of Europe. And Gordon adds a generous amount to his sausage mixture to "make mine a little bit spicier" — hence the "twist" in his Scotch egg.

"I'm going to crumble in black pudding. That helps to season the Scotch eggs inside," Gordon says in the video above. Watching the step-by-step tutorial from Gordon will convince you that making this seemingly complicated egg dish is a lot easier than it looks. As the video's caption suggests, "Organization is the key with Scotch eggs; a little care makes it all worth it." In addition to the black pudding, Gordon adds one more uncommon ingredient that makes a difference in flavor: apple. He adds a handful of grated green apple "just to make it a little bit sweeter and a lot easier for the kids to eat." Get Gordon's full instructions in his YouTube video above, and impress your friends and family with this elevated British dish.