When he's not on Broadway or starring in Modern Family, actor Jesse Tyler Ferguson is an avid food blogger. He has teamed up with Pepcid and chatted with me on the phone about how the blog began, some of his favorite spicy food recipes he's developed with culinary partner Julie Beth Tanous, and the cooking technique he's always wanted to master.

How He Developed His Love of Food

"I think if I wasn't an actor, I would put myself through culinary school. I've always been very intrigued and impressed with chefs and I'm sort of most starstruck by chefs. I get to meet a lot of celebrities, but it's chefs and people in the culinary world that always sort of make me excited. I also inherited a larger kitchen once I moved from New York to Los Angeles so I became a lot more ambitious in the kitchen."

"I'm also a big collector of cookbooks, so my favorite thing to do is crack open a cookbook, find a recipe that looks interesting, and then find ways to make it my own. [I'll] tweak it and use [it] as a jumping-off point for my inspiration. I started posting photos of what I was making on Instagram, and people started asking for the recipes.

"It sort of turned into this thing where I moved all that content over to a blog and I started cooking with my friend Julie, who is a chef and a recipe developer. It's great because I sort of feel like I'm reaping the benefits of culinary school. She teaches me how to do proper knife cuts and some of [the] techniques she learned in culinary school. It's been a really fun venture."

"I use a lot of influences from New Mexico. I love spicy food and I was raised in New Mexico so I'm always introducing hatch green chile into recipes. There's a hatch green chile eggs that I really love. There's a spicy cauliflower deviled egg. Instead of the heaviness of mayonnaise, we created our own kind of mayonnaise with cauliflower and experimented with that. It's really tasty."

The Menu He's Most Proud Of

"[There's] this carne asada recipe that's really delicious that I love. We have a whole actual menu for the Fourth of July that I'm really proud of that I've actually pulled out several times."

How Diet Is a Balancing Act

"It's meant to be mainly healthy eating, but I'm not one for rules around eating. I don't like putting parameters around what I can have and what I can't have, so I feel like if I'm 80 percent healthy, I can really ease up on the other 20 percent."

"I prefer sunny side up. I do an olive oil technique, I just put about two tablespoons of olive oil in the pan, crack some eggs, cover the pan, and let them sort of sweat in the olive oil. Cook for about a minute and 15 seconds, and it's usually a perfect egg.

"I'm one of the people that really wants to be better at doing the poached eggs. I'm having a really hard time mastering that technique, but I have those little cups that you can basically float in a pan of water. I found them at a Williams-Sonoma and they basically take all the skill away from having to poach an egg and it sort of does it for you, but I want to someday be able to master that."

Chrissy Teigen
Chrissy Teigen Learned From the Best, Because Her Mom's Spicy Thai Chicken Wings Are Divine
by Julia Duda 21 hours ago 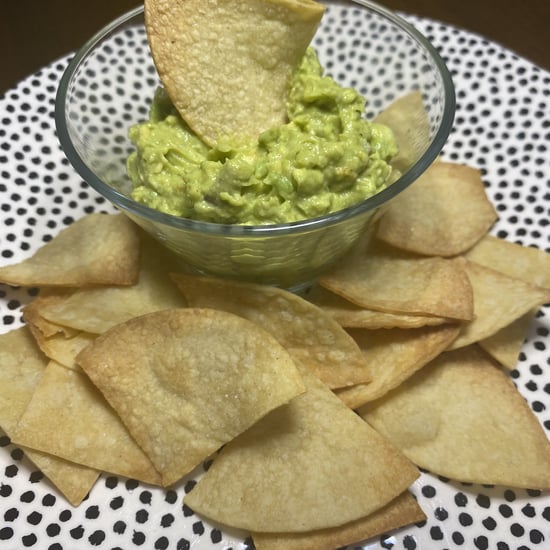 Recipes
How to Make Delicious and Crispy Tortilla Chips in an Air Fryer — Only 3 Ingredients Required!
by Julia Duda 21 hours ago

Food Reviews
I Tried Oreo's New Double Stuf Gluten-Free Cookies, and I Was Pleasantly Surprised
by Chanel Vargas 23 hours ago