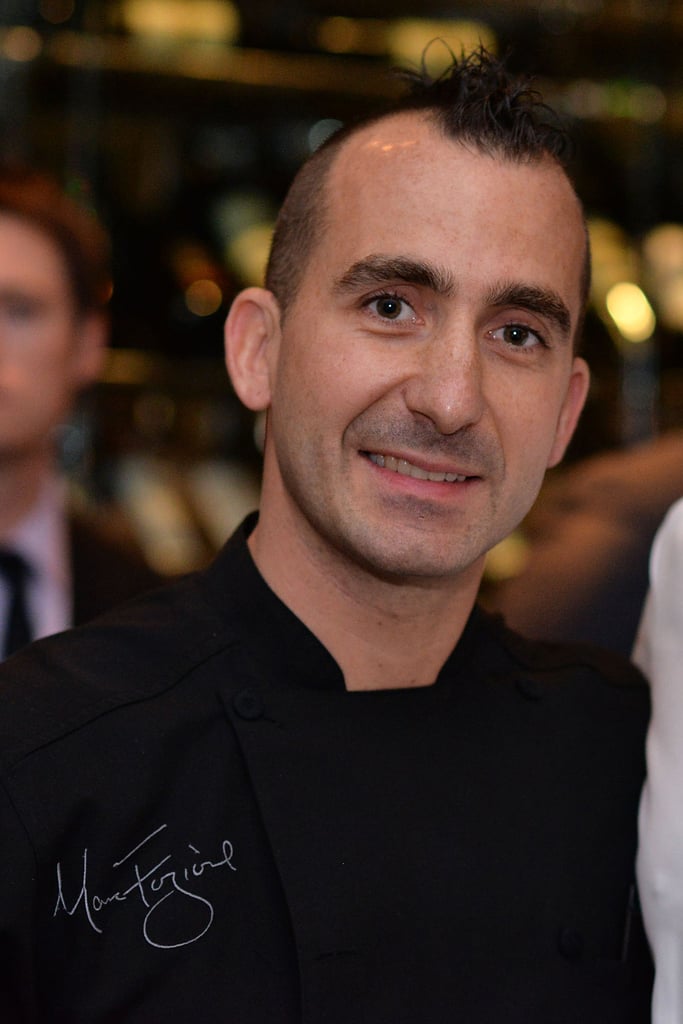 Look, we have a special place in our hearts for Iron Chef Marc Forgione. The man is a steak-searing guru, shares our undying love for bone marrow, and knows how to cook some serious veg. Sitting poolside at SOBEWFF, Marc kicked back with a glass of white wine, and we talked about his first self-titled cookbook ($40), published today, as well as his favorite cut of steak and his pet peeves with food trends.

POPSUGAR: Tell me more about your new cookbook.
Marc Forgione: It's a book that is legitimately for everybody. It's stuff straight from the restaurant. I didn't candy-coat it or tone it down. If people really want to make the braised short ribs, it might take you two days to do it. A lot of people are going to think at first glance that it might be too difficult for the home cook. I had my mother test the recipes. I didn't have a professional recipe tester test the recipes, because I wanted to see if she could do it. The first couple of recipes, she actually called me, upset. 'Why did you do this to me? It's too hard.' But by the time she got to the seventh or eighth recipe, she was asking me for stuff that was more difficult. It made her a better cook. I hope that it makes people better cooks.

PS: What does the steak of your dreams look like?
MF: I'm in love with the Tomahawk chop that we get from Pat LaFrieda — 28-day dry age prime. We baste it in its own fat; you don't need anything else other than salt.

PS: What cut of beef do you think is underrepresented?
MF: People in general think that the hanger steak is a cheap cut and are turned off by it, but when I'm hungry at the restaurant and I feel like just having something to eat, I'll cook myself a hanger steak.

PS: What common mistakes do you see people make when grilling steaks at home?
MF: They play with it too much. When you put a steak on the grill, you should only touch it five times. Put it on, rotate it so you get the hatch mark, flip it, rotate it again, then taking it off. Don't touch your meat.

PS: What's an easy way home cooks can serve up bone marrow?
MF: Make sure you soak the bone marrow for 24 hours. Sometimes bone marrow can be a little bit funky and it helps get the blood out. Get a roasting pan or sauté pan. Put a little bit of water in the bottom; throw in a handful of rosemary, thyme, and garlic. Season the bone marrow with salt and pepper. Cover the pan with foil. Turn your stove on to 350°F. [Set the pan on the stovetop] and bring your water up to a boil. Then put it in the oven for 11 minutes. Can't cook it too high. If you cook bone marrow too high, it will melt — it's just fat. So you gotta cook it at a low temperature.

PS: What inspired your carrot-glazed carrot?
MF: I think I came up with that recipe when I opened BLT Prime with Laurent Tourondel. He wanted the sides to be a little different than they were at BLT Steak, to kind of differentiate the two. I'm always a big believer of cooking vegetables in their own juice when you can, and then it kind of just went from there. If I make celery root soup, when I'm puréeing it in the blender, I add a couple tablespoons of celery root juice or celery juice, so you get that pure flavor.

PS: You're constantly pushing the envelope in terms of developing out-there recipes. What dishes haven't worked?
MF: Speaking of bone marrow, I used to do deep-fried bone marrow with caviar and I thought it was the best little snack in the world. But we just couldn't sell it. And you'd be surprised too. You could spend two weeks coming up with a concept for a dish and you think it's the best thing in the world. But the ones that usually strike a chord with people are the ones that you put the least amount of thought to, like they just happened. We needed to come up with a special.

PS: How do you feel about food trends?
MF: I don't follow food trends. If you were to ask me what foods are trending right now, I wouldn't be able to tell you. Kale, maybe, right? Kale salad or something, which I think is stupid. When people say that an ingredient is played out, it's stupid. Nobody says garlic is played out, right? But everybody serves kale salads now, so kale's played out. They're ingredients that we use. What about chicken? Is chicken played out? No.