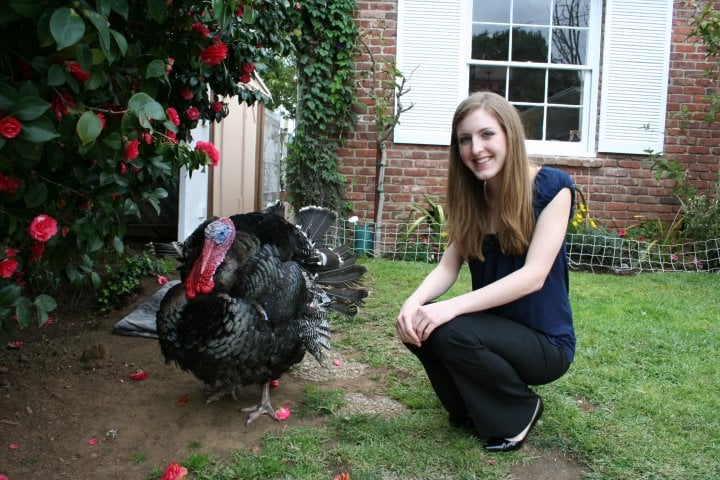 A rescued Thanksgiving turkey and me, in 2010, having been vegan for just over two years

I am a food editor who is a former hard-core vegan. Today I may eat the worldwide gamut of food, but if you had talked to me between the ages of 19 and 22, I would have turned my nose at anything containing dairy, eggs, seafood, or meat. For two and a half years of my three-year stint as a vegan, I lived in Los Angeles, the land of celebrities, yogis, and health-conscious people in general. Every corner had a vegan restaurant and green juice joint, and there was fresh kale and berries aplenty, year-round. I felt utterly convinced that I was doing the right thing for the planet, for animals, and for my health. However, all that changed when I moved to New York City upon graduating college.

I always knew I wanted to be a food writer/editor, so I packed my bags and headed to New York City to attend a plant-based culinary school. "What sort of food writer is vegan?" my mom exasperatedly questioned me. I never saw it as a limitation, even when I dined at some of the finest restaurants in the world. In fact, I believed the best chefs were the ones who could produce a vegan tasting menu full of creative, interesting flavors, rather than simply serve a plate of steamed broccoli. I still think this is true.

When I arrived in New York City, I immediately immersed myself in the vegan community. I worked as a chocolatier in a vegan chocolate/wine shop, attended yoga classes every day at a notoriously vegan studio, and joined all the vegan meetups I could. My weight (and energy) were at all-time lows, yet I attributed it to my busy schedule and the rigor of city life. The only thing I couldn't handle was the hunger. Sure, being vegan, I felt my stomach grumble every couple of hours, though in New York, I felt painfully hungry constantly.

Related:
9 Things I Wish I'd Known Before Going Vegan

And then, I started dreaming of steak. I mean, x-rated, slow-mo, sizzling food-porn dreams. I'd wake up in a panic and run to the kitchen to stuff myself with spoonfuls of peanut butter, pea protein powder smoothies, and leftover lentils. Despite attempting to eat every type of vegan protein known to mankind, I'd always leave the kitchen unsatisfied, salivating, and angry because I still envisioned a big hunk of charcoal-grilled steak with bloody juices seeping onto the plate.

"If your body is trying to tell you on a subconscious level that it needs the nutrients from a steak, then listen to it."

I was in such a conflicted state. Perhaps it was part pride (I'm saving the environment; emotional, sentient beings; and myself by being vegan) and part fear (how can I face my job, my yoga studio, my vegan friends, and my vegan sister if I decide to quit?). I neglected those steak dreams for three months before I finally booked an appointment with Annemarie Colbin, the founder of Natural Gourmet Institute, who has a Ph.D. in holistic nutrition.

I told her my predicament. "I'm vegan and I'm dreaming of steak," I shamefully admitted. She looked at me amused. "Then you must eat steak," she responded matter-of-factly. I exasperatedly explained, "You don't understand. I can't just eat steak. I've made a commitment! Isn't there some bean-grain combo that can give me the nutrients I need and make these dreams disappear?!" She shook her head. "If your body is trying to tell you on a subconscious level that it needs the nutrients from a steak, then listen to it."

I didn't listen to her then. Instead, I tried to deny the truth and became obsessive about which grains to pair with which beans to form complete proteins. Nothing was working. Then, I started to dream of salmon, too. Flaky, Asian-glazed salmon with a crisp skin. Waking up from those dreams was agonizing, and I'd shlep to the kitchen to eat my sad, slimy bowl of sprouted amaranth cereal.

Right before Christmas, a few friends from culinary school planned a trip to go to a farm in upstate New York to learn how to slaughter chickens. Despite growing up around hunting camps and hunters, never in my life would I have considered killing an animal for food. I was so ravenously hungry, the thought of doing so excited me. My primal needs to hunt and eat meat were kicking in. Though I didn't join them on that trip, it was a turning point. It was time to break up with veganism.

I went home for the holidays and spoke to my vegan sister. While we were getting ready for Christmas dinner, I whispered to her, "I think I'm going to eat a steak on New Year's." Eyeing my ghostly complexion and exposed ribs, she didn't even blink before saying, "Yeah, that's a good idea." I don't know why I needed that green light, but I did. No one in my family, save for my sister, thought I'd actually go for a filet mignon on New Year's, until the waiter took my order, and I said, "I'll take the eight-ounce, medium." And that was that.

I watched the plate of steaming steak waltz through the dining room until it finally landed in front of me. The caramelized crust, the bloody juices, and the unmistakeable, smoky aroma matched the steak of my dreams. And that first bite — lord have mercy — that first bite couldn't have been more perfect. I danced in my seat with giddiness, feeling rebellious and relieved all at once. A lot of people claim that going back to meat can be upsetting on the stomach, but I didn't have a single problem. The same went for returning to dairy.

The biggest challenge of giving up veganism was realizing how much I had let it define me and influence my relationships. I became aware of how enraged and difficult I was. Over the past few years, I didn't have much compassion toward fellow humans, and I blamed them for factory farming and their lack of consciousness. I demanded that my friends and family go to vegan restaurants and questioned them for their eating habits constantly.

Today, I think I have a much healthier approach to food and, most importantly, to fellow humans. I tend to sway toward fresh produce, legumes, and grains, with some meat, seafood, dairy, and eggs, of course. I support my local farmers and fishers so that hopefully there will be better options in the world and fewer factory farms. Sure, wild, grass-fed, and organic is way more expensive, but it feels better to me to eat higher quality less of the time than to eat meat for every meal.

This experience taught me that my body is constantly evolving. What works in one city, in one period of my life, may not work in another. It's all about being open, experimenting, and seeking the guidance of professionals when necessary. Oh, and creating balance. The key word is definitely balance.

Personal Essay
I Weathered the Winter Storm in Texas, but It Left My Anxiety at an All-Time High
by Sydni Ellis 12 hours ago

Costco
Costco Is Selling Moutai Astrology Liquor, So Having a Drink Tonight Really Is Written in the Stars
by Sydni Ellis 3 days ago