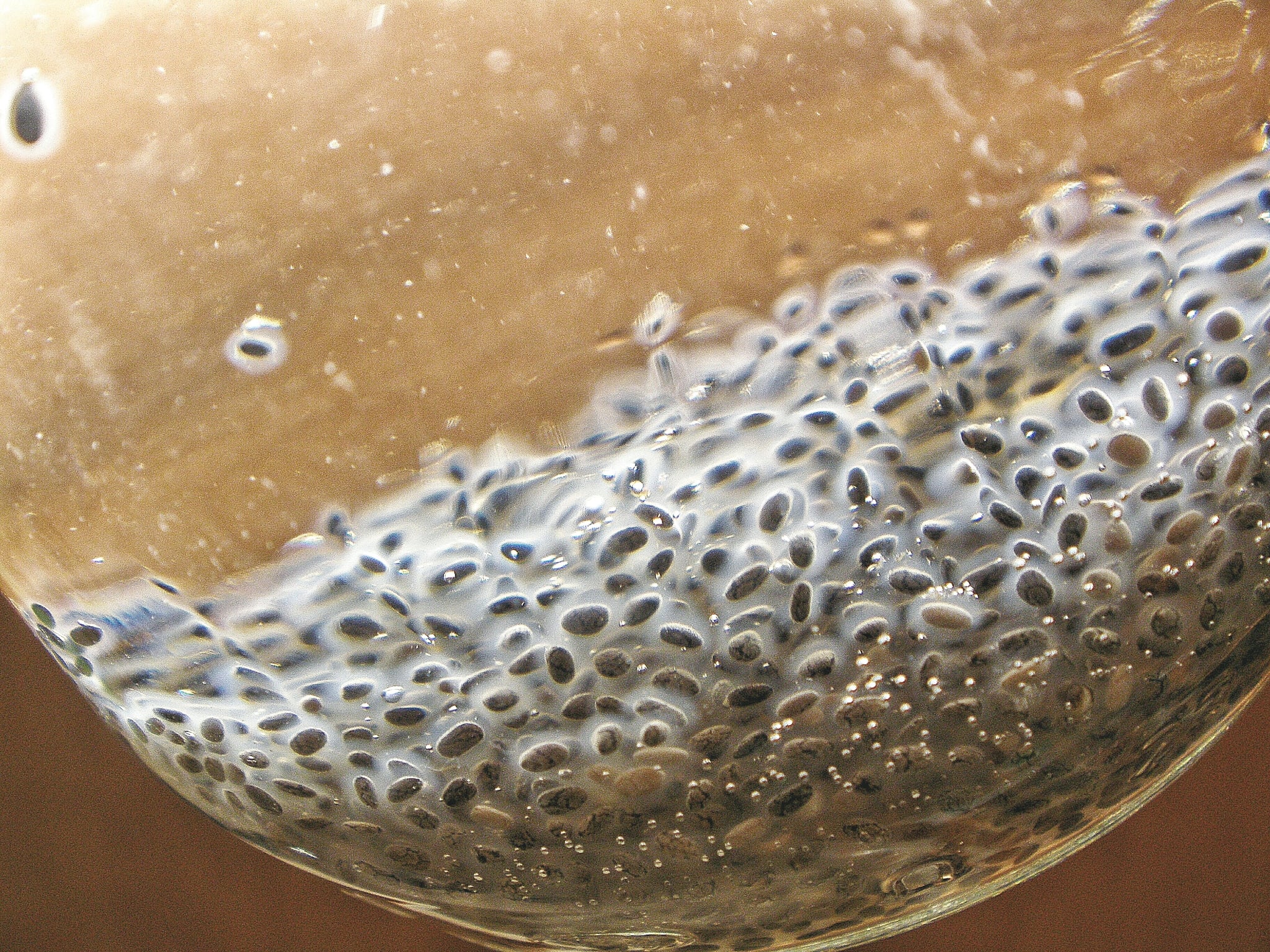 Oh, TikTok, the creativity and innovation you bring to the world is impressive, but the influx of weight-loss gimmicks on the app are less than desirable. The latest being the "internal shower" drink, which is basically a DIY liquid laxative and has garnered over 90 million views on TikTok.

The ingredients for the internal shower involve mixing two tablespoons of chia seeds and fresh-squeezed lemon juice into a cup of water. One TikTok user who reviewed the drink described the texture as "alien slime," and another compared the consistency to a "glass of semen." Delicious.

Nutritionist Luke Hanna posted his reaction to the latest trend, saying, "Why are you all obsessed with making yourself sh*t your own pants? Because that's all this 'internal shower' is doing." It's just fiber, he said, and we should be eating it every day through vegetables, beans, and nuts.

People in the comments swear it has worked for them, though — claiming weight loss, cleared acne, and reduced inflammation. But if the drink is being used as a laxative to lose weight quickly, it can lead to disordered eating, a spectrum of eating behaviors that can have a negative impact on your life (different than eating disorders, which fall under a strict list of symptoms in the DSM-5).

POPSUGAR spoke with Toby Amidor, MS, RD, CDN, FAND, award-winning nutrition expert and author of "Diabetes Create Your Plate Meal Prep Cookbook," for her take on the trend and to learn whether it contributes to unhealthy dieting culture. Find out more about the internal shower drink below.

What Is the Internal Shower Drink?

The drink is basically a DIY laxative to help with constipation, but it has been promoted on social media as a way to gain a "flatter tummy," thanks to the main ingredient, chia seeds (which are loaded with fiber).

TikTok videos featuring the drink have credited Daryl Gioffre, board-certified chiropractor and author of "Get Off Your Acid," who spoke about the internal shower on a recent episode of "The Skinny Confidential Him & Her" podcast. Originally referenced on the podcast as a "constipation reliever shot," the trend pulled its name from his instructions: "You drink that on an empty stomach and it's like an internal shower." He now shares "summer twists" on the "powerful intestinal cleanser" on his Instagram.

The recipe is simple: mix together a cup of water, two tablespoons of chia seeds, and a freshly squeezed lemon, then let it sit for 15 minutes to let the chia seeds expand. Once the seeds have congealed, it is ready to drink. Is it healthy? The verdict is still out. Similar to laxative abuse (more on that below), using it as a "cleanse" can slip into disordered-eating territory.

Can You Have Too Much Fiber?

Fiber helps your digestive tract function, and a high-fiber diet may reduce the risk of heart disease and diabetes, according to the Mayo Clinic. However, if you consume high amounts of fiber too quickly it can lead to GI distress like bloating, stomach pain, and gas. Like anything else, you want to consume fiber in moderation. The Mayo Clinic recommends introducing more fiber in your food over a period of weeks in order for your natural bacteria in your digestive system to adjust to the change. "You can absolutely increase the fiber in your diet, but do so slowly over time and accompany it with more fluids," Amidor says.

How Can You Naturally Add Fiber to Your Diet?

Fiber is an essential nutrient that we should all aim to add to our daily diets. The recommended amount of fiber is between 25 to 38 grams per day. But rather than front-loading your fiber by chugging chia seeds before breakfast (which honestly sounds like a choking hazard), try spreading out the fiber. "You can divide your fiber intake throughout the day, which can also help keep you feeling fuller longer," Amidor says.

"There are so many fiber-filled foods options that really this 'internal shower' is silly. If you are feeling constipated, you may not be getting the recommended amount of daily fiber — most folks get less than half! — and eating fiber-filled foods throughout the day can help alleviate the issue."

Vegetables like beets, carrots, and avocados are rich with fiber and combined with fruit can create a tasty smoothie (especially if you prefer to receive your fiber in liquid form). Beans and nuts also add fiber in addition to a variety of nutrients and vitamins.

What Are the Risks Associated With Using the Internal Shower as a Laxative?

In general, laxatives are an easy over-the-counter fix to get your bowels moving again. Unlike most supplements, FDA has a list of approved drugs if you're suffering from constipation. But the risk of using laxatives comes in when it's not being used for its intended purpose.

According to Cornell Health, some mistakenly believe fiber-based laxatives will help with weight loss when in reality the drugs flush water and waste from the intestines — not calories — and ironically can cause more bloating, not less. Leaning on laxatives for weight loss could result in a physical or psychological dependency. Plus, long-term reliance can cause symptoms of electrolyte disturbances, dehydration, and mineral deficiencies, and severe cases of laxative abuse can permanently damage the digestive system and colon, according to the Rosewood Center For Eating Disorders.

If you're trying to use the internal shower method to lose weight, Amidor says you should examine the reason you're using laxatives in the first place. Is it to help move things along in the bathroom, or to try to expel food faster in an effort to appear slimmer? "You really should reflect on why you want to lose weight and why are you unhappy with the way you look," Amidor says. "That may help understand some deeper issues that may be prevalent."

It's the intention that makes the difference of whether or not the behavior falls under disordered eating. If weight loss is a constant thought on your mind, you may want to talk to a registered dietitian nutritionist (RDN) or certified therapist who can get to the root of the issue.

If you or someone you know is struggling with an eating disorder, the National Eating Disorder Association (NEDA) has resources available, including a 24/7 helpline at (800) 931-2237. For a 24-hour crisis line, text "NEDA" to 741741 or use its click-to-chat help messaging system. 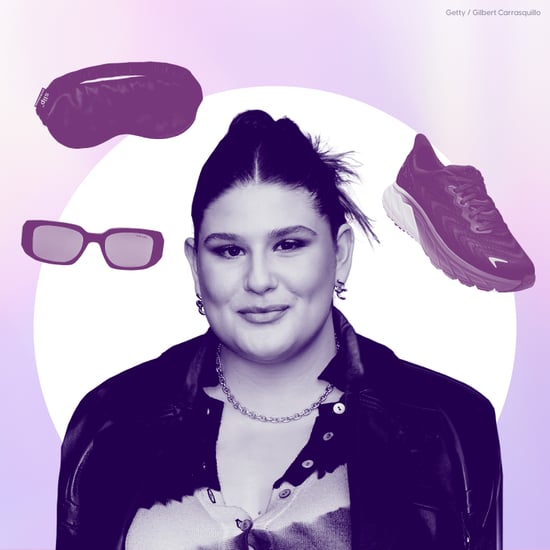