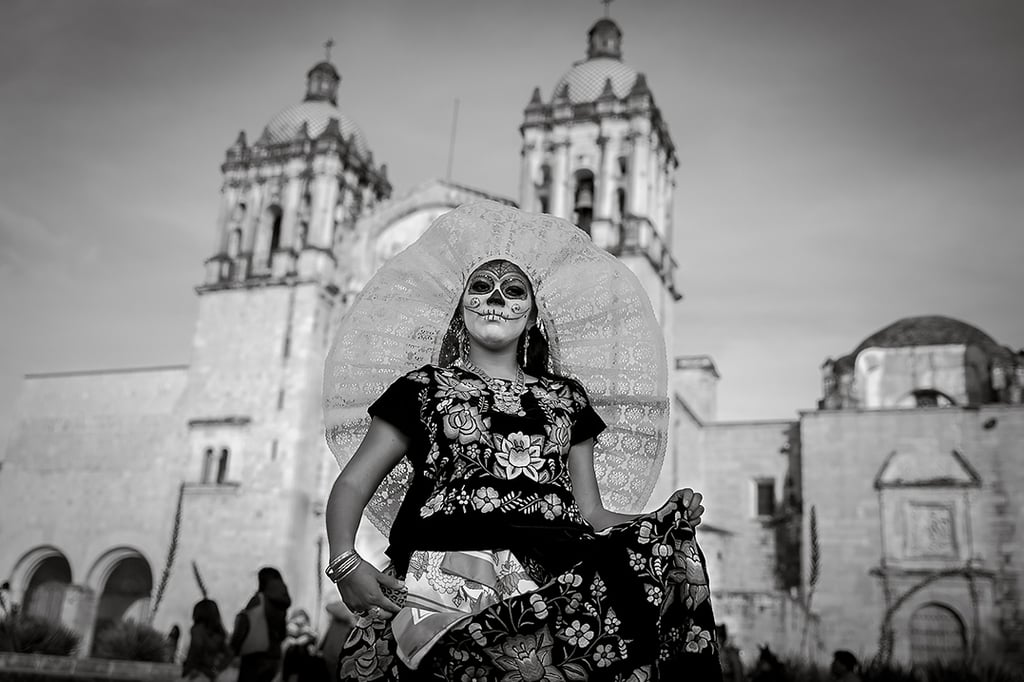 Pan de muertos, la catrina, flor de cempasúchil, traditional colors, dishes, and altares or altars: all of these play an important role in what many know as Day of the Dead, but what my culture and family refer to as Día de los Muertos.

"Hija, preparemos el altar" or "Honey, let's arrange the altar" are words my mother would say days before Nov. 1. Usually the preparation begins on Oct. 31, the same day Halloween is celebrated in the United States, and while the holidays almost overlap in date, it's important to understand they are different.

I was born and raised in California, but my heart and culture come from Mexico. Like many other Latinos or Mexican-Americans, dates such as Day of the Dead are important and celebrated in my family. So what exactly is behind this day? Let me break it down.

Día de los Muertos is celebrated in many Latin American countries but emphasized in the Mexican states of Michoacán, Jalisco, and Oaxaca. Traditionally, this festivity traces back to the Aztecs and was at one point a month-long commemoration. Have you ever heard of Día de los Angelitos or All Saints' Day? This plays part in what Day of the Dead celebrates today.

It all begins with the altares or the altars. Being from Jalisco, it's tradition for my family to begin preparing the altar of the person we are commemorating three days prior to the actual holiday on Oct. 31. Together, we begin gathering ofrendas or offerings that remind us of the person who has passed. This can be anything from food to drinks, clothing, music, photos, colors, and religious images or representations. Altars are decorated and placed in either the person's home or a tomb in the cemetery. Papel picado (literally punched or perforated paper) is seen on the altars usually with cutouts of skulls and skeletons.

Once you've prepared the altar, you can welcome the souls of those who passed. Children are celebrated on Nov. 1. The next day is dedicated to the adults, and the festivities are similar on both dates. Imagine a cemetery filled with people, music, colorful decorations, food, and lit candles.

While in the US, many paint their faces on Halloween as skeletons to mirror death, the same is done in Mexico on Día de los Muertos but with a different essence. La catrina, which translates to "the lady in the hat," is a female skeleton and is probably the most recognized symbol of the holiday. She wears an elegant bright-colored dress, which many women wear as a way to mock death. In comparison to how a skeleton is portrayed on Halloween in the states, there is nothing scary about la catrina. In fact, she represents the upper-class outfit of the Europeans.

The same goes for the cemetery. While in the US, the cemetery is home to scary stories and haunted houses, the cemetery in many Latin American countries is home to everything just the opposite. Even the word skeleton has a different meaning. Calaveras refer to funny rhymes on that day. For example: "Comadre pelona, me alegro de verte. No andemos con chanzas, que yo soy la muerte". Translation: "Bald lady, I'm glad to see you. Let's not joke around, I am death."

The holiday, which at one point only existed in Mexico, has now migrated to other countries including the US. You don't have to be in Mexico to celebrate, but you do need to know the meaning behind the celebration to appreciate its culture and know that it's a traditional event not related at all to Halloween. The beauty behind Día de los Muertos is its symbolism. As a family and with your community, you celebrate death.

Personal Essay
I Surprised My Mom With an "Eternity" Bouquet, and It's the Best Gift I've Ever Given
by Chris Roney 2 hours ago

Personal Essay
"What Are You?": The Multiracial Experience Can Be Tricky to Explain to Friends
by Christina Swayney 5 hours ago

Winter Fashion
Let Me Introduce You to the Homecoat, aka the Coziest WFH Robe in Existence
by Natasha Marsh 1 day ago