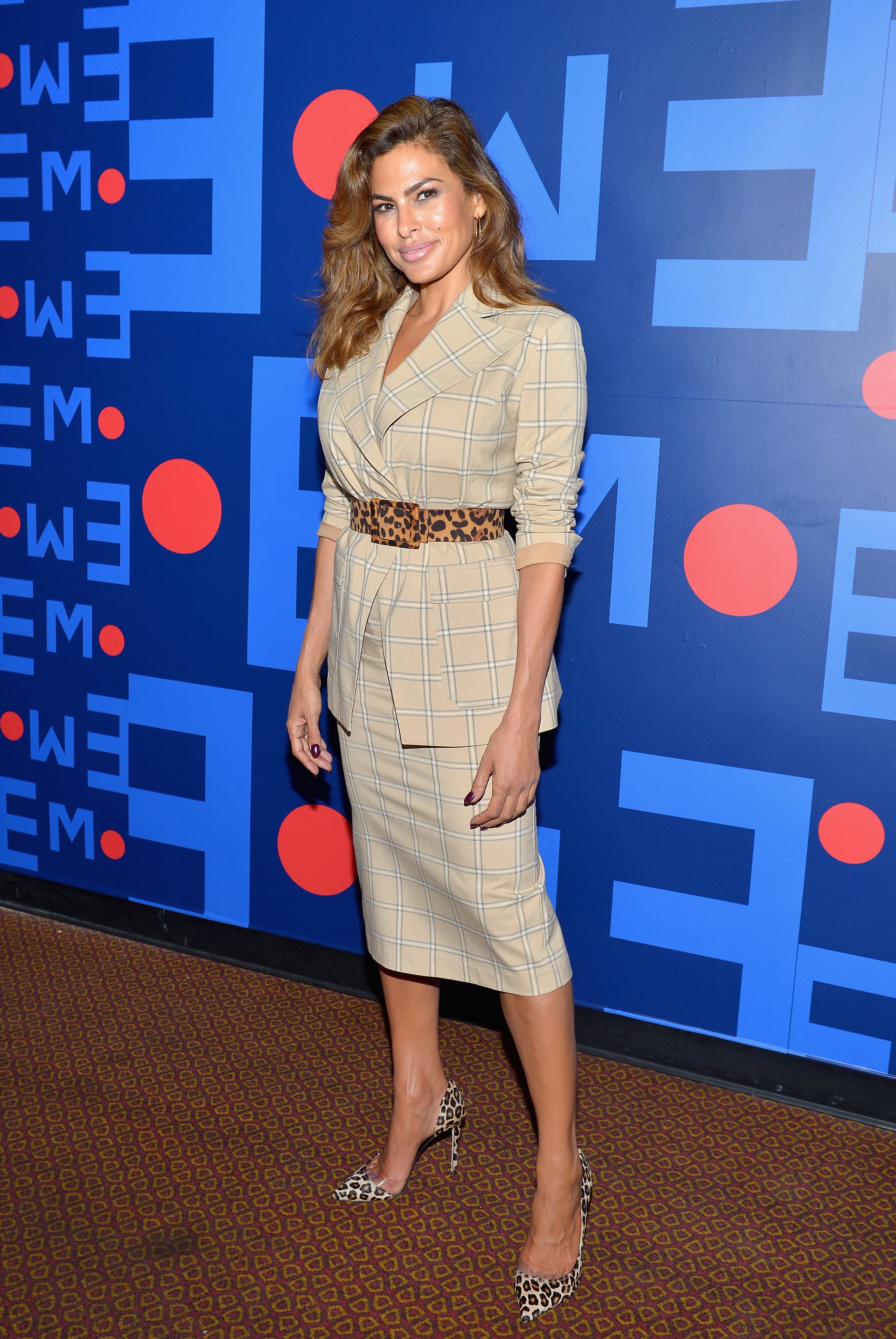 Eva Mendes is considered one of the most beautiful women in Hollywood, and before interviewing her, I thought she was very intimidating. Not only because she's gorgeous, but also because she always looks in charge of any situation, she commands any room she walks into, and she has had the power to actually keep paparazzi away from her personal life, which not a lot of famous people have been able to do.

Since she became a mother in September 2014, we haven't seen much about her other than through her collections with retailer New York & Company. Now that her two daughters, Esmeralda, 4, and Amada, 3, are getting older, she's ready to give us a glimpse into her life in the most mom way possible.

Eva released two very special t-shirts in her May collection with New York & Company that feature artwork created by her two children: the St. Jude Chick Graphic-Print Tee ($40) and the St. Jude Graffiti Graphic-Print Tee ($40). A portion of the proceeds from the tees will go to St. Jude Children's Research Hospital, hence the names, and it will be the first time a piece of Eva's collection will have a direct link with such an outstanding organization by raising funds for it.

We had a chance to speak with Eva about this exciting collaboration, raising multicultural children and all that encompasses, her Cuban heritage, and her upcoming projects. What she had to say made me relate so much more to her, and now I can't mention Eva without adding "and OMG, she's so sweet!"

POPSUGAR: You've been working with New York & Company since 2013 designing your line. What inspired you to create these t-shirts in particular?

Eva Mendes: My kids are at this amazing age when all they do is create. My little one just turned 3 not too long ago, our older one is 4, and all they do is so beautiful. They create every day. They color, finger-paint, actually paint — my older one is painting with acrylic sometimes — it's all about arts and crafts here. Not only do we encourage that, but they naturally do it. It's beautiful that they have no judgment of what they create. Everything is equally amazing. As a parent — and I know most parents can relate — when your kids create something, it's hard not to think it's the most beautiful piece of art ever, so I thought that in honor of Mother's Day, I could have two of my favorite artworks of theirs on a t-shirt. 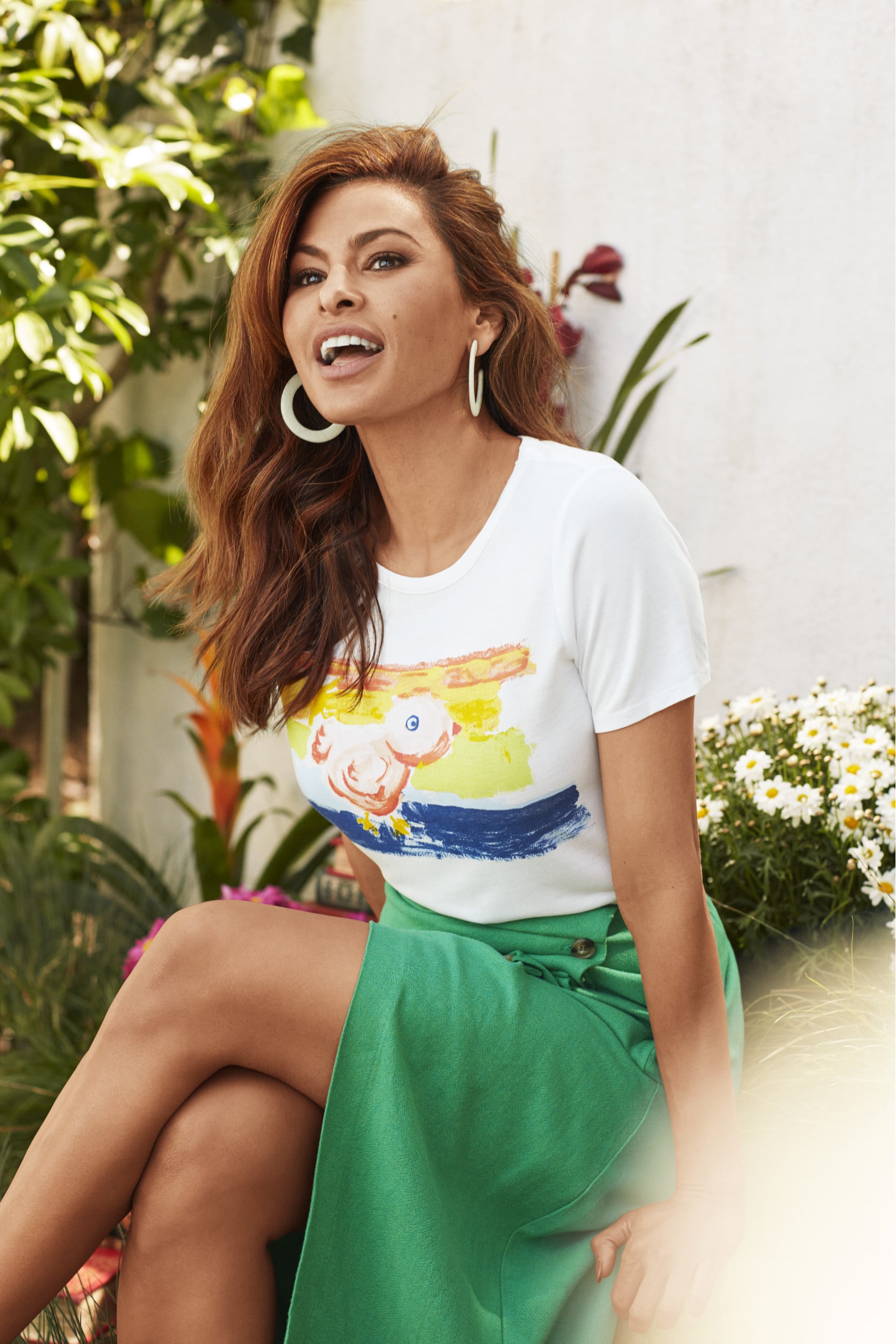 PS: So they had already created these artworks, it's not like you specifically asked them to draw something for this . . .

EM: No, I didn't, because I didn't want to put that pressure on them. Since they create most of the time, I didn't want to make it a task. I just picked my two favorites that I thought would look best on a t-shirt.

PS: It's so great that you're encouraging your kids to be creative and promoting their art in such an amazing way. Some of the proceeds are going to St. Jude Children's Research Hospital, and New York & Company has worked with them before. What made you decide to join this initiative?

EM: It was a natural partnership because New York & Company raised over $4 million just last year for St. Jude, and they've been partnering with them since 2008, way before I started working with them. It's such an incredible thing that I just thought if I'm making these t-shirts with my kids' art around Mother's Day, some of the proceeds should go to them.

PS: How do you continue to draw inspiration for your fashion line?

EM: It's really challenging because we drop a collection every five to six weeks and it's a lot of work, but it's obviously the fun work. I have an amazing codesigner, Alejandro Blanco, who doesn't get the credit he deserves. I'll send him random emails and texts in the middle of the night, and I'll go through a lot of old pictures from my mom, my grandmother, my sisters, and I'll be inspired by a piece.

I haven't even told Alejandro this, but I recently found a photo from the '80s of me and my mom — it's so cute! — and it's her in a purple polka-dot skirt suit. I'll see something, and it'll spark something. Then I'll tell Alejandro to find ways to incorporate that inspiration. He's the one that follows trends, and I provide inspiration, style, and whatever's happening in my own life. I use my own life, and Alejandro, my codesigner, helps me channel that into fashion. 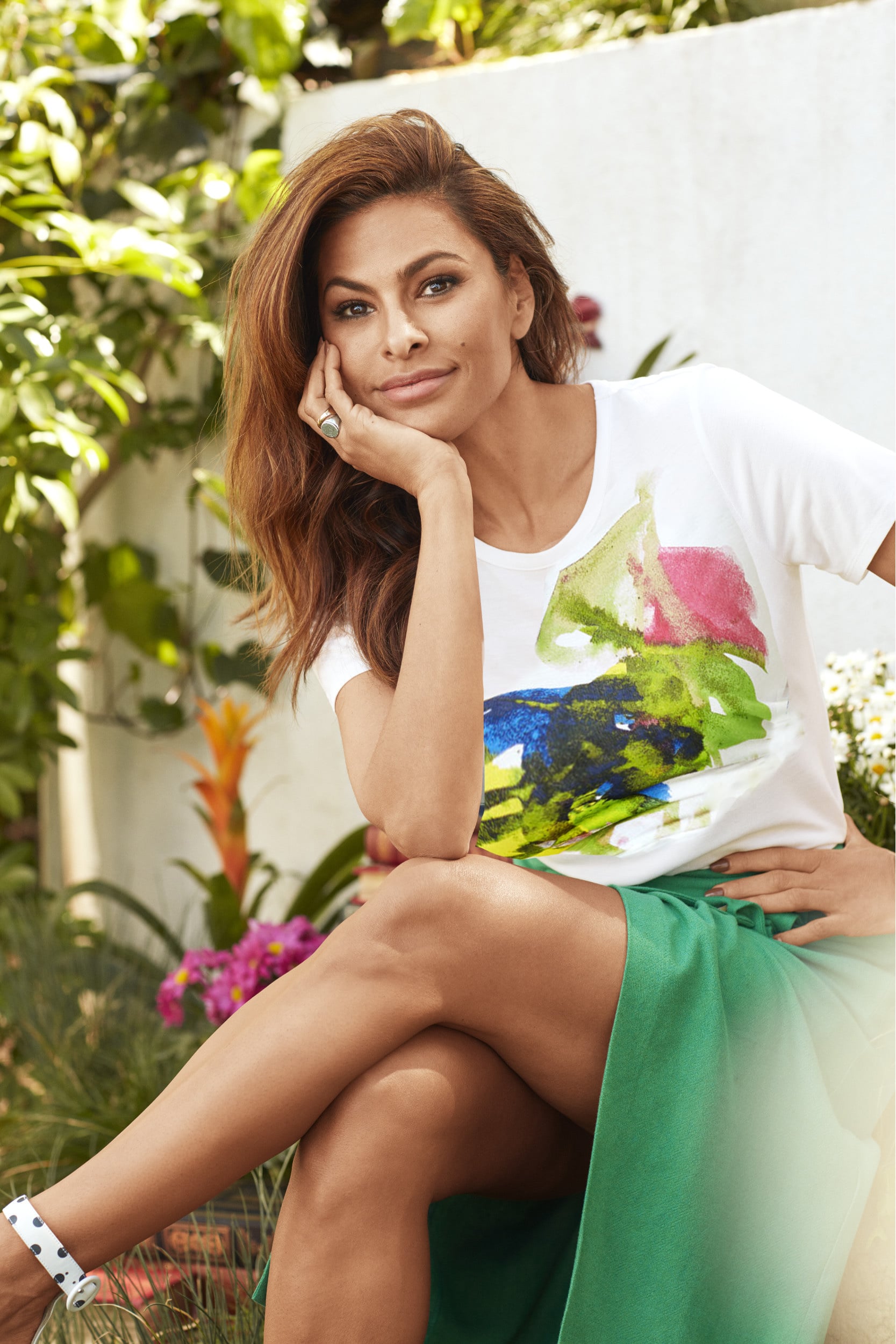 PS: How do you bring your heritage to your work as a designer and entrepreneur?

EM: I kinda don't think about it because it's so in me. Even though I was the only one in my family born in the US, my dad still doesn't speak English, so it keeps me very connected to my Cuban roots, and I love it. My mom still makes my black beans for me — I know, it sounds really bratty — but she makes the best black beans! So I'll make it easy for her and go and pick them up. I'm very connected to my roots, and I don't give it too much thought when I'm working or designing or making certain choices on what to do next because it's in every choice I make.

PS: Do you tell your daughters that you're Cuban and they're part Cuban?

EM: Of course! We're working on Spanish with them. They love their grandpa, and they know that Abuelo doesn't speak English. They communicate great, because they speak a little Spanish, it's practiced every day. One of my best friends is Dominican, and she has two girls. She told me that if I don't talk to them and make them talk to me in Spanish, they won't want to do it because they're raised in the US anyways. I'm trying to be very cognizant of that, but I am definitely a Spanglish speaker because that's how I grew up.

PS: Besides the language, what do you feel has been the biggest challenge to you as a mother raising bicultural kids?

PS: And what do you think is the biggest challenge for you as a mother in this day and age?

EM: Honestly, right now I still feel challenged by getting them in their car seat! It's so hard to get two little ones to leave the house. The struggle of the car seat and strollers is real, it's the thing I find the most challenging at this point. I wonder if other mothers know what I'm talking about. You can't just throw your kids in the car; you have to pack a bag, snacks, a "just in case" diaper, and it's all of this that I find so "ay Dios mio!" I have forgotten their shoes so many times because if you don't just get out of the house quickly, it's not going to happen, and then you realize you never took the shoes! Now I just keep a pair of emergency kids' shoes in the car.

PS: How do you juggle your time between motherhood and work?

EM: I feel like I don't have enough time, to be honest. I made a choice to stay home-ish — thankfully, I can design from home for New York & Company — but just recently, I'm starting to feel that I'm ready to start looking for something special as far as acting is concerned.

Up until now — and again, my baby just turned 3 a few days ago — I really wanted to be home more, and I'm so grateful that I've had that choice. I do want to slowly get back into work, and when I say work, I mean something in the acting world, and I also have a couple of other things that are percolating right now that are exciting to me outside of the acting world, so I'm slowly getting my ambition back.

PS: Did you lose your ambition after having kids?

EM: My ambition didn't go away, it just shifted. I was very ambitious as a career woman, and then it shifted once I had kids. It was interesting because it was still there, but it went to the kids, and now I'm starting to get more excited to work now that they're not babies anymore. 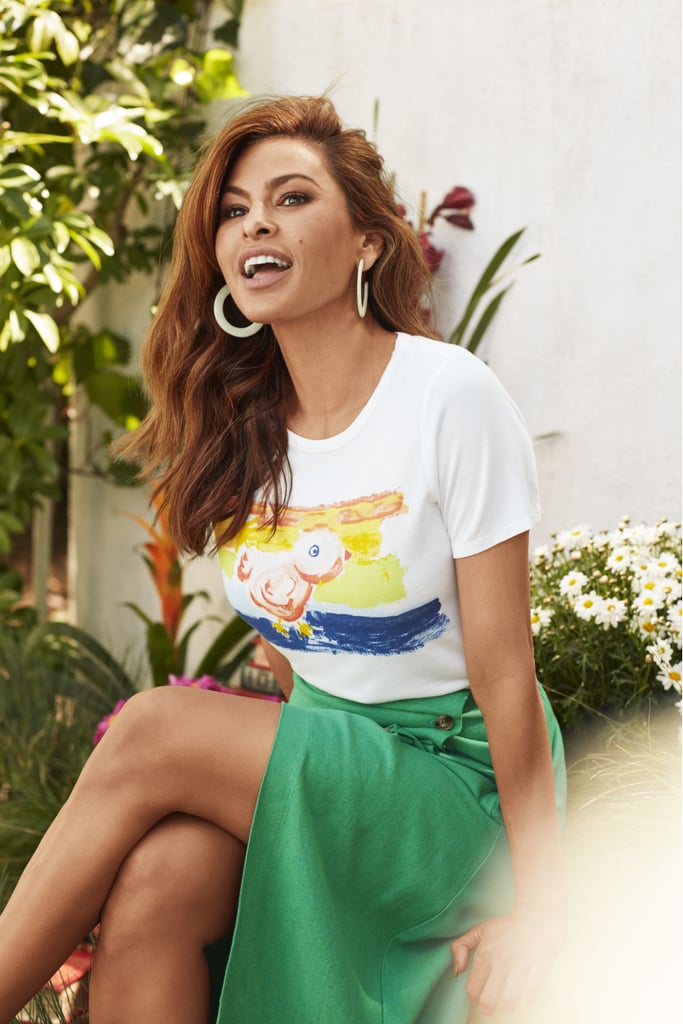 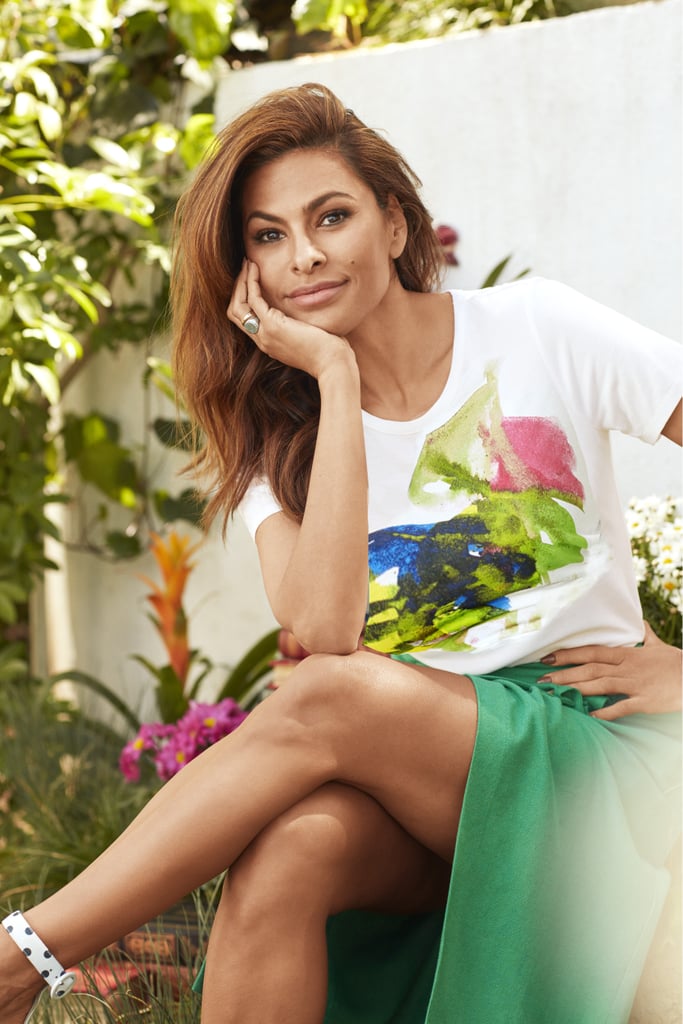