Ozuna was definitely the biggest winner at the Billboard Latin Music Awards 2019. El Negrito Ojos Claros was already in for a big night, being nominated a staggering 23 times in 15 different categories. "I am extremely grateful to God for the great joy of being 23 times finalist at the Billboard Latin Music Awards," the urban performer said when the nominations were announced earlier this year. "I thank my family for standing unwavering by my side, my fans for following me in every step, Billboard, Telemundo, and all the media outlets for the support they have always given me."

Ozuna was humbled by the awards, and when he went up on stage to accept his artist of the year recognition, he made sure to thank God, and dedicated the award to his children, Sofia and Jacob, and his wife, Taina Melendez. He thanked her for always being there for him since the beginning. He took a moment to also thank his manager, his fans, and all his colleagues in the urban genre, such as Anuel, Wisin, and Daddy Yankee.

The singer didn't want to let the opportunity pass and encouraged everyone to follow their dreams and to not stop regardless of what others might say. He went on to add that we're all human and we're all equal, and we all just have to keep on fighting to continue pursuing our dreams. He thanked the Latinx community and finished his speech by saying, "May God always protect you all."

Music
Saleka Describes What It Was Like Collaborating With Dad M. Night Shyamalan on a Song in Old
by Kelsie Gibson 1 hour ago

Music
Anne-Marie and Little Mix's New Video Is Basically Bridesmaids, but With Versace Robes
by Navi Ahluwalia 2 hours ago 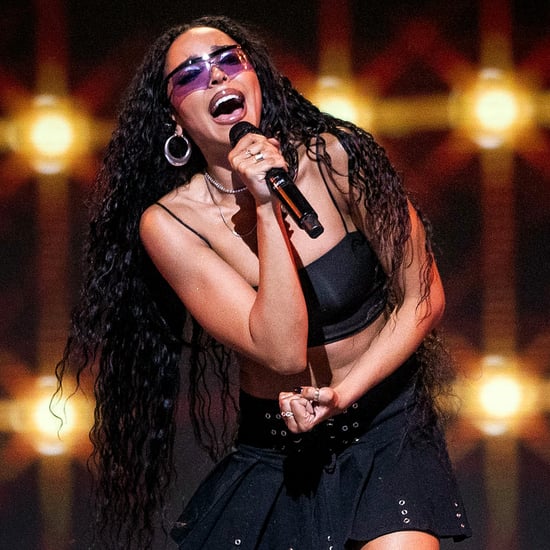 Tinashe
Tinashe's New Album Is Dropping in a Matter of Weeks — Get All the Details!
by Monica Sisavat 19 hours ago