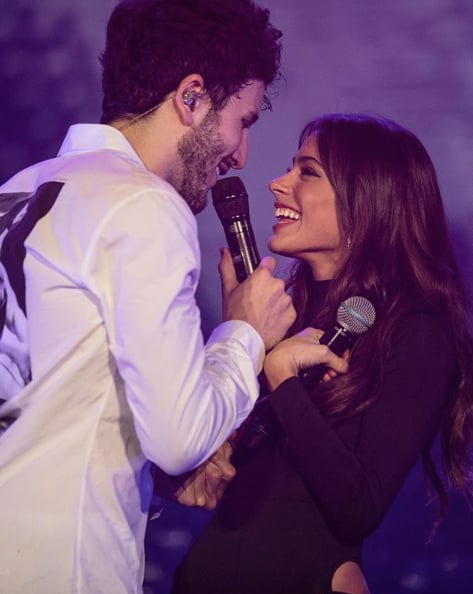 Sebastian Yatra and Tini Are the Latinx Couple of the Moment, and These Photos Are Too Hot to Handle!

It wasn't a surprise for anyone when Sebastian Yatra and Tini Stoessel confirmed their much-rumored romance on June 10. Truth is, we had been hoping for these two to be official since we saw their video for "Quiero Volver" last Summer, where their crazy chemistry came to light on screen and ignited a lot of suspicion from fans who insisted the Colombian crooner and the Argentine singer were an item.

While their chemistry was undeniable, Tini was in a relationship with someone else at the time, and she was famously recorded in a behind-the-scenes video rewatching one of the steamy scenes with Sebastian, saying, "It really looks like we love each other."

Related:
The Jonas Brothers Team Up With Sebastián Yatra For Their First Latin Song, and OMG, Yes!

Tini and Sebastian met in 2016 when Tini — who rose to fame for being the lead in Disney Channel Latin America's musical series Violetta — approached Sebastian to record the song "Ya No Hay Nadie Que Nos Pare," for her first album. They developed a lovely friendship and mutual admiration for each other. The duo collaborated again in 2018 on "Quiero Volver," but, according to Tini, it wasn't until Sebastian invited her to be the lead actress in his video for "Cristina" earlier this year that they realized there was definitely something more between them.

TBH, I'm just so happy that this Latinx couple are out and about displaying their love wherever they go. They're living in the moment and embracing the passion, which might be a Latinx stereotype, but one I can get behind. We all should live life to the fullest and express our emotions freely. And these two are so hot, I personally feel like I'm invading their privacy whenever they post a photo or a video, but for some reason, I just can't look away! The way they exchange glances, or how they can't agree who loves the other more, makes me feel like I'm part of this love story.

Related:
16 Latin Songs That Will Make You Say "¡Qué Calor!" This Summer

Another thing I love about them is the fact that ever since the whole world noticed their chemistry, it wasn't only fans who cheered them on, but also their pals from the music industry as well. I thought that only happened to us regular Latinx whenever we dared post a photo with someone we're "getting to know," only to have all of our friends swarm into the comments with hearts, kissy faces, and ring emoji. But we've seen the likes of Jesse from Jesse & Joy, Johann Vera, Greeicy, Alvaro Soler, Christian Nodal, Sharlene, Llane, Cali y el Dandee, Mau y Ricky, and even Ricardo Montaner comment their support for the couple, and yes, ring emoji were thrown in there.

It was about time they finally realized what all of us had known for a while. I'm grateful that they continue to bless us with sexy photos and videos on Instagram to give us hope that true love does exist. Keep scrolling to see some of their best photos!