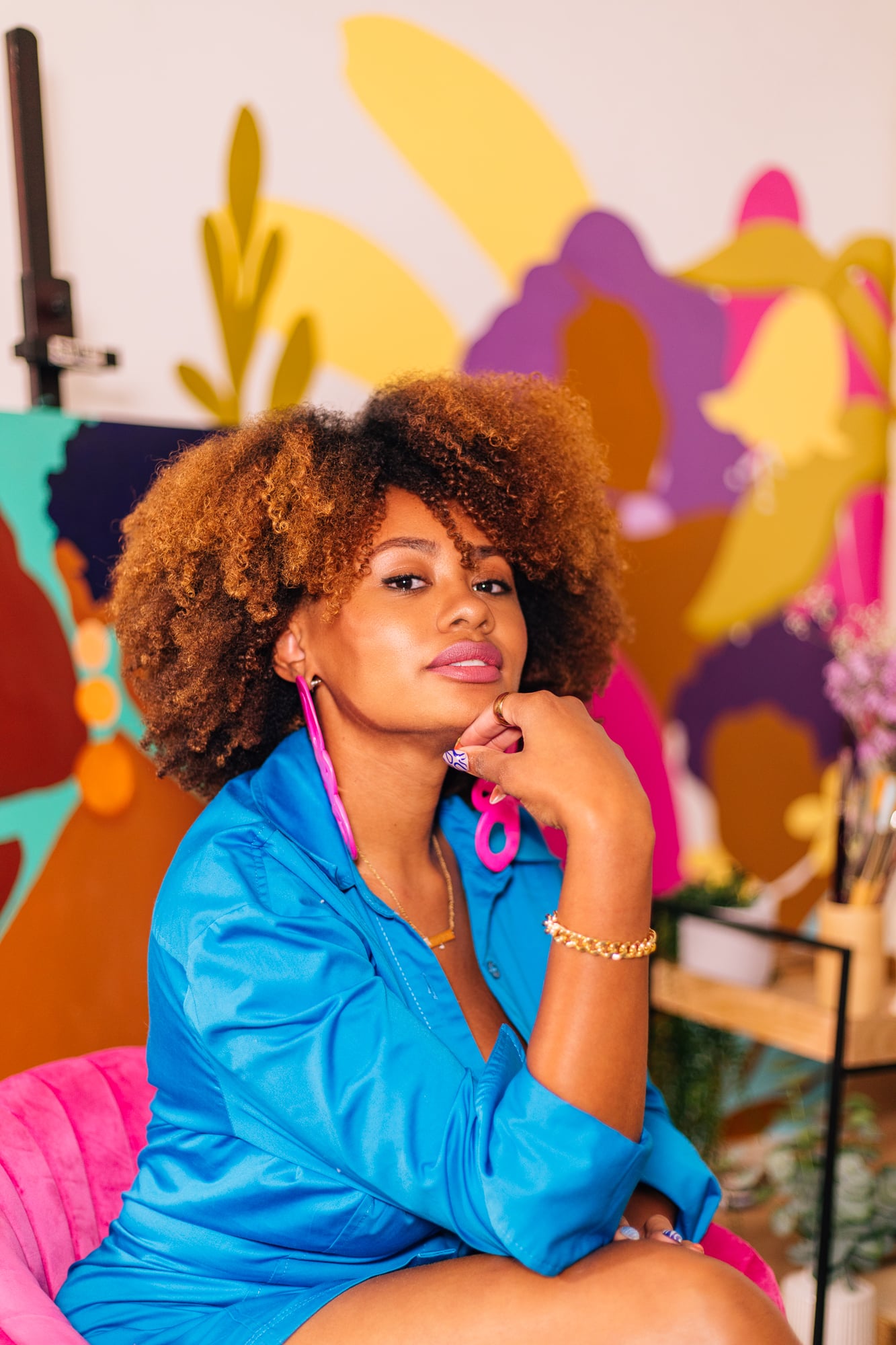 In 2017, Afro-Latinx visual artist Reyna Noriega began her career as a full-time creator. Little did she know that in just a few short years, she would have over 100,000 followers on Instagram, would be working with huge brands like Apple and Old Navy, and would design a cover for "The New Yorker." Born and raised in Miami to a first-generation Cuban father and a Bahamian mother, Noriega, who is best known for her bold, vibrant, graphic work, was destined to be an artist.

"My father is also an artist, and I became interested early on in just the magic of it all, being able to bring ideas to life on paper and communicate in a universal language," Noriega told POPSUGAR in a recent interview. "I was always the 'sensitive kid' feeling a lot and thinking a lot, so art and writing were great outlets for me to get all of that under control and to be able to process my emotions."

Now, Noriega's art is being seen on a much wider scale and impacting thousands of people who follow her on social media or see her art on city walls and T-shirts. To get there, she had to put in a lot of work, including studying and learning on her own, despite the fact that she took art classes throughout high school and minored in art in college. Using the help of books and YouTube, Noriega honed her skills and eventually left her job as a teacher, with the full support of her parents.

"I was very fortunate that my family believed in me and my ability to make my passion a career and even help me make it happen! To this day, my mom is the person that helps me run my online shop, and they encourage me to strive higher," Noriega told us. 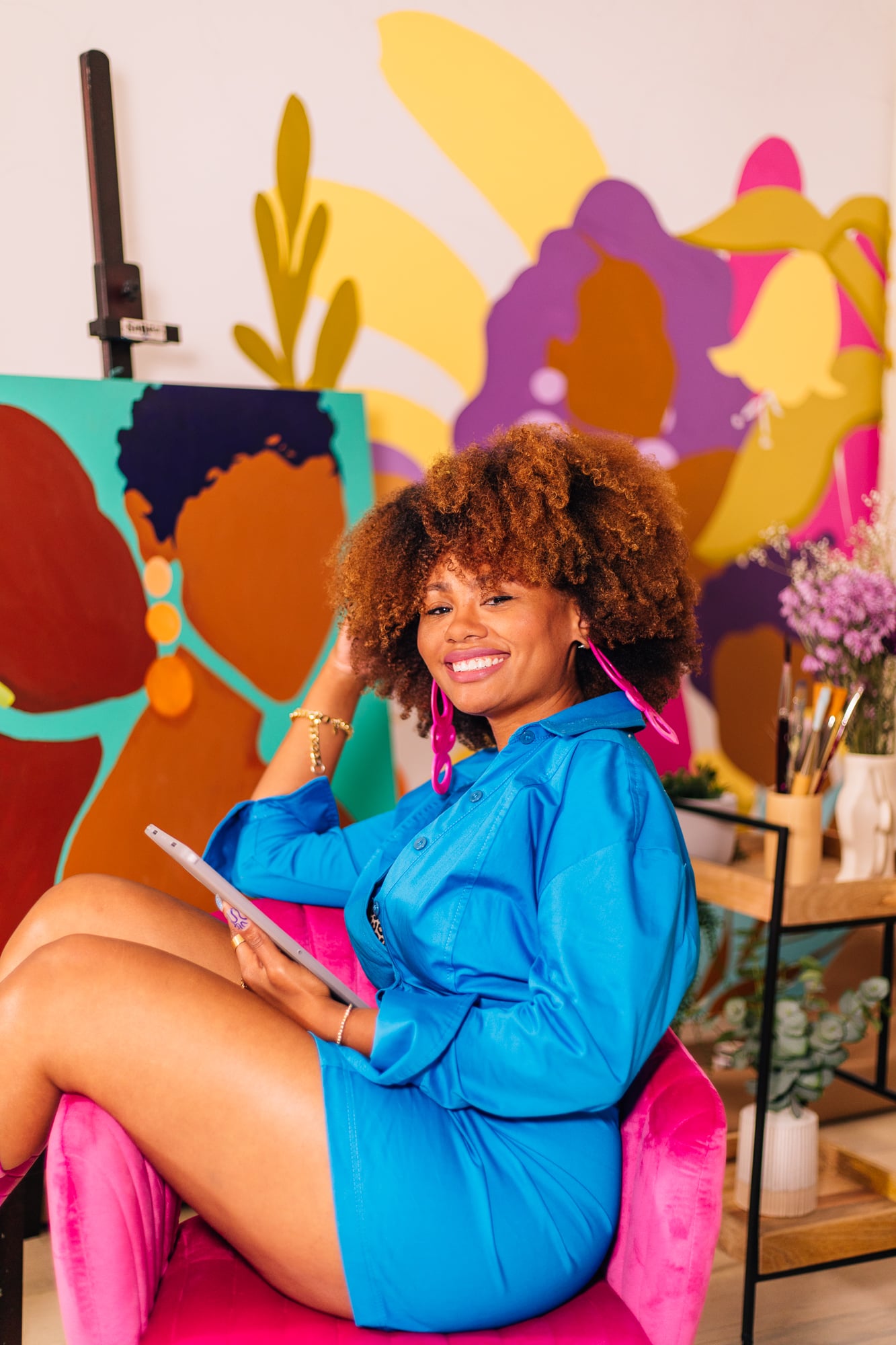 By 2019, Noriega started doing brand work, after getting comfortable with her style and what she wanted to represent as an artist. It gradually became easier for her to align herself with brands that had the same mission. Last November, she worked on Amex's Always Welcome campaign, which provided businesses with signage for their storefronts that indicated their stance on inclusivity.

"Honestly, every time I get an email, I am honored and humbled that my name enters rooms I never thought would. From companies whose products I used to save up for at one point, like Apple, to legendary publications like 'The New Yorker,' or having thousands and thousands of people wear a shirt I designed with Old Navy. It really is a dream come true," she said.

Ultimately, it was Noriega embracing her culture and her commitment to advocating for Black and brown people through her art that got her there. She says her Afro-Caribbean culture is what brings "vibrancy and flavor" to her art. But we think it's so much more than that. With just a single glance, it's obvious that Noriega's background informs her work. Her use of color, the way she showcases the female form, the various complexions and skin tones she celebrates in her work, and the stunning, tropics-inspired botanical scenes she often creates speak to exactly who she is and where she comes from.

"I wanted to create work that would lift moods and raise the self-efficacy of Black and brown women with positive representation and vibrant depictions of joy."

"Art has always been a place I look to boost my mood, museums, galleries, [and] learning about art history. But unfortunately in those spaces, rarely did I ever feel I belong, because my story wasn't told on those walls, and in the rare occasion it was, it only highlighted the struggles and traumas," she said. "I wanted to create work that would lift moods and raise the self-efficacy of Black and brown women with positive representation and vibrant depictions of joy."

Noriega describes the art she creates with a tremendous amount of care and respect. Her mission is to create art that represents and uplifts communities that are often left out of the conversation. "I focus on women because as a woman, I know all of the challenges and barriers we face," she said. "Inequalities in pay, harmful messaging on body image, the ongoing fight for body autonomy . . . it can be really exhausting. Add on to that the challenges being a BIPOC, and it just magnifies. My art is meant to celebrate women, inspire joy, and a reclamation of peace and rest."

Noriega recognizes how important it is to not only amplify voices like hers but also to use her gifts and resources to speak up for people who don't have the same advantages that she does. Even as a Black Latina, she's cognizant of the privileges she has and the responsibility associated with them. "For me personally, I often look at my identities as a privilege, which pushes me to amplify Black voices even more. I am all too aware of the advantages I have received being a Latina in Miami, and even being ethnically Caribbean, although my race is Black," she said. "Being able to say where your lineage comes from is a privilege many Black Americans don't have. I have been unfairly judged and treated and had some very hurtful comments said to me, but I must also be aware of how my skin tone provides privileges, how my heritage provides privileges, and how knowing more than one language is a privilege." And in recognizing that, she's able to leverage her position to empower others in really visible ways.

Noriega's online community and sales have been growing steadily since she started creating full time back in 2017. "I went viral on Twitter and saw some pretty exciting days in January of 2020 and then in June with the murder of George Floyd and the push to amplify Black artists, I saw my Instagram grow from about 53K to 80K," she said. Noriega believes that social media has opened a wide world of possibilities for artists of color, while also recognizing the enduring need for those artists to be able to gain access to brick-and-mortar spaces like museums and galleries.

For now, though, Noriega suggests aspiring artists start with what they have and keep chipping away at their goals. "Figure out what your inner voice wants to share, what makes you unique, [and] start by just making a community, a safe space to share your ideas and connect with like-minded individuals. Do what you can to fill in the gaps of what we're not taught, [like] financial literacy, forming businesses, etc.," she said.

To see more of Noriega's work, visit her on Instagram, and keep an eye out for her upcoming book, "In My Cocoon," this winter.