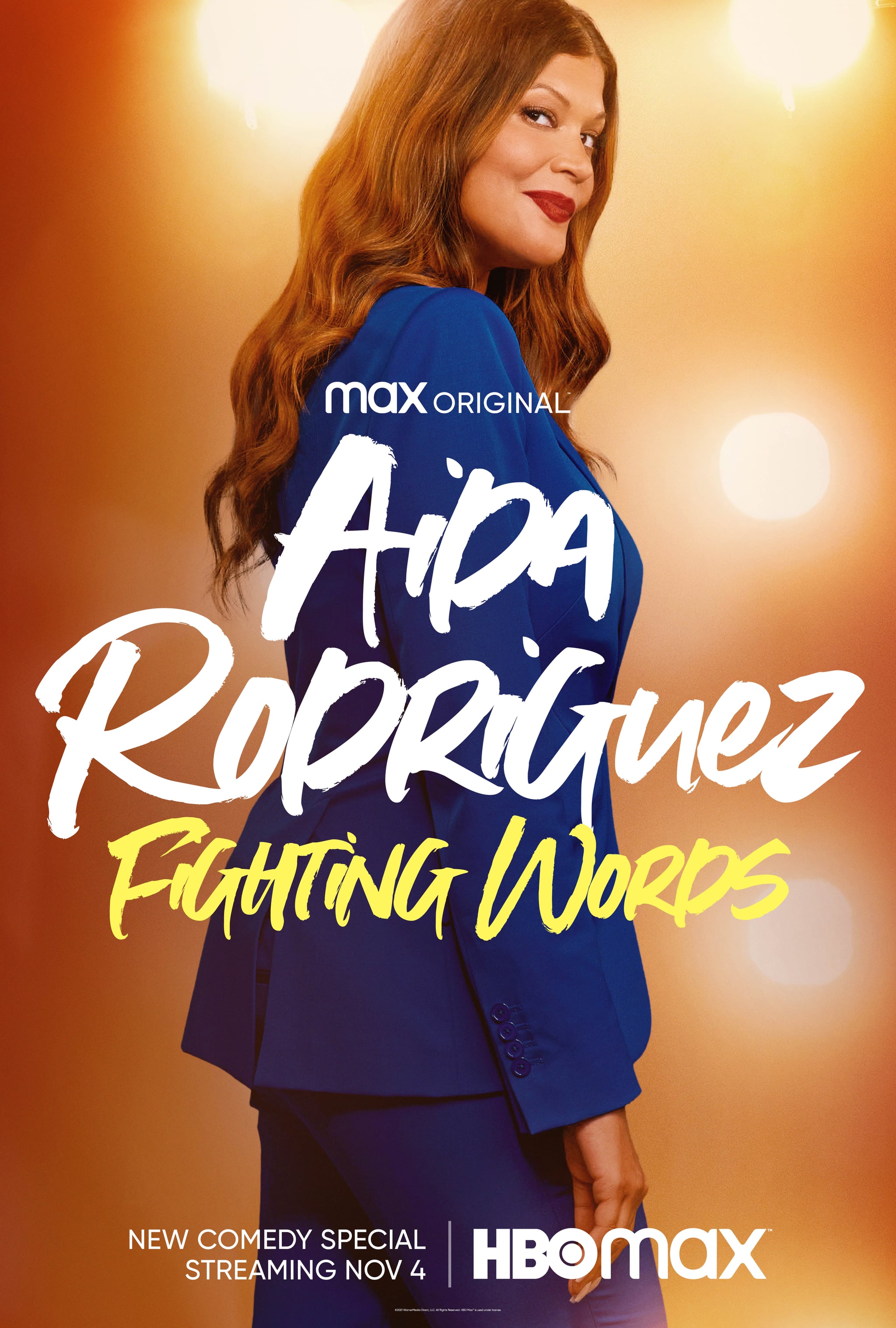 "Latinos like to flex on other Latinos. Nobody holds us down like how we hold each other down," Puerto Rican and Dominican comedian Aida Rodriguez says in her new one-hour HBO Max comedy special Fighting Words, that premieres on Nov. 4. Ain't that the truth! While there is something beautiful about the way Latinx communities unite and take pride in our cultures, there's no denying the discrimination and the harm that also tends to stem from Latinidad. Aida keeps it 100 when it comes to that reality. In her new show, she breaks down some of the hardships she's experienced from homelessness, growing up without her Dominican father present as a result of deportation, sexual abuse, and the issues that very much plague Latinx communities from colorism to misogyny and the divisions that exist within various Latinx communities – like the long-lived beef between Puerto Ricans and Dominicans. She highlights the shame that often comes with these experiences and her mission behind the special was to not only make folks who can relate to her upbringing feel seen, but to also provide healing through comedy and remind people they aren't alone in these experiences.

Rodriguez who is half Puerto Rican and half Dominican, shares early on in the show that she didn't know she was half Dominican until she got older. Her Puerto Rican side of the family managed to keep it from her that her dad is Dominican, like it was "bad news," she says. "I'm serious, they were like we gotta talk to you. You're probably not going to like this, but you're half Dominican. You don't have to tell nobody," she says on stage to a laughing crowd before sharing the recent trips to both Puerto Rico and Dominican Republic that she took, in an effort to reconnect with her roots and reunite with her Dominican father. In fact, Rodriguez intentionally had the entire experience filmed and included as a mini travel documentary directed by award-winning documentarian, Nadia Hallgren, that plays at the end of the comedy special.

"I was raised in the United States. A lot of the stuff that I have done in terms of comedy has involved me talking about being Puerto Rican and Dominican but I believe that not only are Latinx, Latino and Latinae people not a monolith, neither are Puerto Ricans and Dominicans. And I feel that so much of my comedy has to do with where I'm from," she exclusively tells POPSUGAR Latina. "It feels exploitive if it doesn't include the people that I'm talking about. I know that at HBO Max, this is going to be a pioneering moment for Latinas in comedy and I wanted to make sure that I included and made visible the people whose shoulders I stand on and that made it possible for me to be who I am, and those people come from the Dominican Republic and Puerto Rico."

Rodriguez is very intentional about her comedy especially when it comes to how she's representing for Latinx communities. She's really nailed her storytelling in a way where she can share her truth and her experiences – even the hard ones – in a way that doesn't perpetuate negative stereotypes. It's something she's always mindful of when it comes to her craft. She wants to challenge people about the way they view communities of color who come from struggle. Even if someone grew up in poverty, around domestic abuse, or without a father, that doesn't mean they don't deserve to be treated with the same dignity and respect that someone who grew up in a much more privileged upbringing might receive. She wants to humanize these experiences for audiences.

"I just know that colorism was real in my family, so I'm not going to ignore that or erase people of darker hues. I'm going to use my lighter privilege to bring to light the pain that's been caused to the people not just in my family but throughout the world, that have to deal with this because it's not something that's just exclusive to us."

"I want to make sure that it doesn't feel exploitive because as much as some things are stereotypes, those things can be real for other people… for me it's like this journey that I'm taking and it's not just about me. It's about us," she says. "In thinking about my stories and what I talk about, I always start with me and what I've experienced in life and how I see these issues from my perspective. I can only speak on my behalf. I can not speak on the behalf of other Latinx people and I don't try to. I just know that colorism was real in my family, so I'm not going to ignore that or erase people of darker hues. I'm going to use my lighter privilege to bring to light the pain that's been caused to the people not just in my family but throughout the world, that have to deal with this because it's not something that's just exclusive to us. It exist in all cultures."

Rodriguez who has been in the comedy game since the early 2000s, received mainstream success in 2019, when Tiffany Haddish chose her along with 5 other comedians, as part of her Netflix Anthology series Tiffany Haddish Presents: They Ready. The opportunity put a lot in perspective for Rodriguez. Not only did she want to use her platform to put Latinx communities on without perpetuating stereotypes, but she also wanted her performances to be an opportunity to start important dialogues. In her recent special, Rodriguez talks about her distaste for woke and cancel culture and how it ultimately doesn't resolve anything. She explains how it ultimately functions as a product of people operating from their moral high horses and then going on Twitter rants, but not necessarily addressing the bigger issues that often go way beyond the person they are trying to get canceled.

"Cancel culture for me, I try to stay away from it. I don't believe that cancel culture is real. The term cancel culture has been weaponized by the right wing people, people who want to say whatever they want to say and want to get away with it. They want to be offensive and attack people of color, Black people, queer people, and folks from the LGBTQI+ community," she says. "I think it's important to identify who the monster is and the monster is the machines. It's the industry [and] the powers that be that put out all this messaging that keeps us in these fights and [that causes us to] never hold them accountable. You can cancel a comedian all day long but you're not affecting the machine and so you gotta target the machine. You gotta target the powers that be. You gotta target the monsters that make a lot of profit from us being at the bottom. For me, that's what it's about."

"I've talked a lot about Latinos and some of the things that are divisive and make us complicated but I do want to praise us because we are beautiful people and I love us," Rodriguez says towards the end of the special. "And as complicated as we are, we are f***ing phenomenal. We're beautiful. And I'll tell you this, one thing we all have in common is that we love food and we love our grandmothers. Yes, Abuela is key."

"I just wanted people to walk away knowing that we're all a work in progress and everyone is worthy of forgiveness and grace."

Part of her decision to film her trips to Dominican Republic and Puerto Rico and include them in the special, was in an effort for people to see the humanity of both these communities. "I wanted people to see the different hues of us. To see how beautiful the Dominican Republic and Puerto Rico really are… I just wanted people to walk away knowing that we're all a work in progress and everyone is worthy of forgiveness and grace," she concludes, "I could have been like f*** my father! I'm never going to see him again. Why didn't he find me? But that wasn't the better choice for me for what my personal goal of evolution is. I was like, I'm going to give this man a chance and a break and I'm just going to meet him where I am and I feel like I am better for it. And at the end of the day, I just wanted people to walk away with love and just say we're trying. We're all trying to be better."