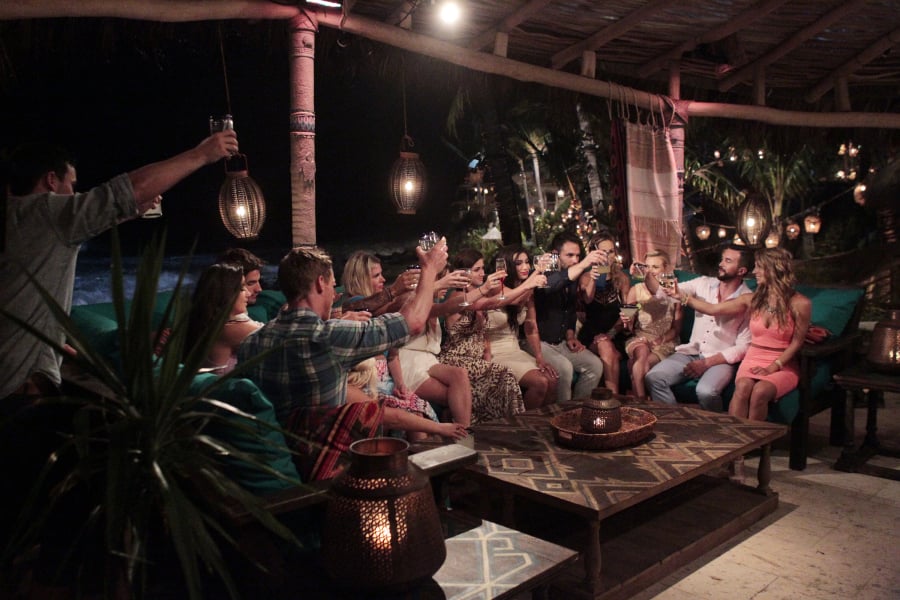 The season premiere of ABC's Bachelor in Paradise aired this week, and the drama was just as juicy as the previews promised. Here's a refresher for those who caught it and a teaser for anyone who missed it.

"It's not if crazy sh*t's gonna happen. It's more so when," former Bachelorette contestant Tanner, who appears to have carved out a role as this season's narrator, accurately sums up the show.

Tanner emerged from the shadows during Kaitlyn's season with self-directed quips acknowledging that nobody knew his name. Bachelor in Paradise has kept this joke alive by filming Tanner talking to cats in his house and geese in the park during an opening scene. But we won't be laughing for long. Now that everyone knows who he is, Tanner has hit Mexico's sandy ground running, destined for a companion neither furry nor feathered.

Meanwhile, Ashley I., who taped enough crying scenes on Chris's Bachelor season to become a waterproof mascara spokesperson, reveals herself as a package deal — literally: She packs her sister Lauren, who reassures viewers that she's a far cry from her virginal sister, in her suitcase, though I highly doubt she lasted the whole trip to paradise in there.

Competition much? One would think. However, halfway through the episode, Chris Harrison announces that, in either some cruel attempt to fuel a sister rivalry or some perverted scheme to stage a sibling sex scene, whenever one sister gets a rose, the other stays too.

"Is that, like, incest?" Carly, the cruise ship singer who braved a session with a sex guru on Chris's Bachelor season, wonders. It is in Jonathan's fantasies; he tells the rest of the guys he's "had a couple of those," and the gentlemanly image we formed of him during Kaitlyn's season evaporates into paradise's tropical blue skies.

Ashley I.'s attention, however, is all on Jared, with whom she "solidified things" by discussing her affinity for the Disney princess Jasmine. After that intimate a confession, spotting Jared by the ocean with Jade is enough to send Ashley into one of the tearful spirals she's famous for. She redeems herself by bringing Jared on the season's first one-on-one date, where they further "solidify" their "connection" on a muddy safari.

Along with Ashley I. and Jared, Carly and Kirk are hitting it off, and so are Jade and Tanner. And after her devastating breakup with Kiptyn, Tenley has a feeling "something big is right here before me." Judging by Mikey's need to introduce himself as a "testosterone-driven" "alpha male," that something ain't his.

The strongest couples of the episode, however, are Marcus and Lacey, who got engaged last season and recited cheesy wedding vows in front of this year's admiring contestants, Jillian's surgically enhanced "girls," dressed in what JJ aptly calls a "minimalistic bikini," and Ashley S. and the parrot she befriends before she even makes it to the bar. Tropical birds, after all, cause far less drama than half-dressed men and women competing for one another's affections.

Over the ensuing weeks, it looks like we can anticipate a pregnancy scare from Ashley I., a broken jaw from JJ, and roses handed out to Jade, Carly, Ashley I., and (by default) Lauren. Still, though Ashley S.'s departure in a stretcher at the episode's conclusion looks ominous, I've got my bets hedged on her and her special avian friend.

Image Source: ABC
Bachelor In ParadiseThe BachelorDatingTV
Around The Web

by Karenna Meredith 23 minutes ago