Indie sensation and The New York Times bestselling author of the Ex Games series and the Private Club series, J.S. Cooper introduces the Swept Away series — three new dark and sexy romances about a woman marooned on a desert island with a mysterious stranger. But is he friend or foe? Read two sexy excerpts from the first book in the series below. 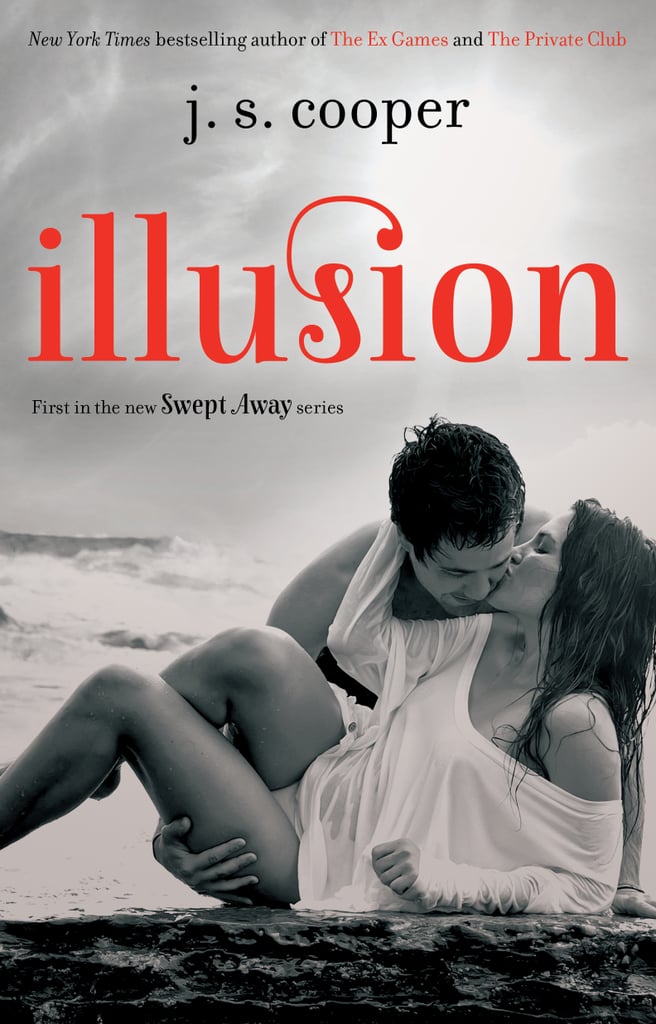 We swam back to the shore and walked out slowly, suddenly deflated. We'd solved our first problem, but now everything else seemed insurmountable.

"So." I stood there awkwardly and ran my hands through my drenched hair. My clothes clung to me like weights, and I had a feeling that I looked like the second coming of the Loch Ness Monster. "What now?"

"I think we should take our clothes off and let them dry." He spoke matter-of-factly and undid the top of his pants. "We'll only get sick if we keep them on. We can lay them out on the sand. The sun should dry them fairly quickly."

"I guess." I hesitated as my fingers gripped the bottom of my shirt. "Maybe they'll dry with us wearing them?"

"I doubt it." He undid his zipper and pulled his pants down. "And I don't want to be walking around feeling uncomfortable either."

"Yeah," I mumbled as I stared at him, mesmerized, as he stood there in just his boxer briefs. His soaked, leaving-nothing-to-the-imagination boxers. I made myself avert my gaze and looked farther down his body. His legs were hairy, stocky, and tan. Sh*t, he was just getting hotter and hotter. I swallowed hard as my eyes worked their way back up and saw his package sitting there in his white boxer briefs.

"I suggest you take your clothes off as well." He gave me a look as if it were the most natural thing in the world for him to tell me to get naked.

"Don't look." I blushed as I started removing my top.

"You do realize you're not changing, right?" His eyes twinkled at me. "I'm going to see you in your underwear in a minute. Do you really need me to close my eyes now?"

"I guess not." I wrinkled my nose and quickly pulled my shirt off. I looked down at my chest self-consciously, thanking God I hadn't worn my see-through white lace bra. The bra I had on had pretty full coverage, albeit with some sexy black lace that I thought was cute.

"Your bra looks wet." He frowned. "You should take that off as well."

"There is no way in hell I'm taking my bra off." I glared at him.

"You're a pervert." I narrowed my eyes at him and ignored the rapid beating of my heart as I went to take my pants off.

I tried to remember what sort of panties I had on. At least they weren't a thong. I wore those only when I was going on a date, to make me feel sexy. They were way too uncomfortable to wear on an everyday basis. I unzipped my pants and let out a sigh of relief as I realized that I had on a pair of plain white briefs and not my Hanes granny panties with the green and yellow flowers.

His eyes narrowed as he watched me pull my pants down quickly. I stared at the ground as I stood there in my bra and panties. "Nice." His voice was soft.

I looked up at him. He wasn't smiling as he stared at me in silence. There was a very primal feel about everything. All of a sudden we weren't just two strangers kidnapped on an island. We were the last two people on earth. My stomach roared as I stared at his almost naked body. This time my hunger wasn't for food, it was for him.

"I see what you were talking about with your eyes before." He spoke lightly. "They seem to be changing from green to brown right before me."

"It's the moonlight and refraction." I smiled up at him weakly. "The way the light bounces off my irises makes them appear different colors."

"They're beautiful." He leaned down and stared into them more intensely.

I could feel my heart beating rapidly as his hands moved up and caressed my back. His lips moved closer to mine, and within seconds, they were pressed down on mine.

At first, his kiss was soft and sweet, and I kissed him back gently, wanting to enjoy the moment. All too soon, his lips moved more urgently, crushing into mine as his tongue demanded entry into my mouth. His tongue was salty and rough as it entered my mouth. He was all-consuming, and I was immediately overwhelmed as he sucked on my tongue and ran his hands through my tangled hair.

I pressed against him and ran my hands down his back. It felt as magnificent as I had imagined, and I moaned as I pushed into him harder. A guttural groan escaped his lips as he pulled back from me slightly. I didn't know if this was real or part of the act.

"I'm so hard right now. I want to f*ck you very badly, Bianca." His eyes bored into mine, unsmiling.

"Don't look so happy about it," I quipped back with my heart racing.

"This is no time to be making jokes." He pulled me toward him, hard.

"I wasn't joking," I whispered, and shifted against him slightly.

He gasped as my hand accidentally brushed against his cock, and he grabbed it. "Don't tease me." He held my hand in his, and I swallowed hard.

"I'm not teasing you." I shook my head at him, not sure what he was talking about.

"You feel this?" He brought my hand to his briefs and pressed it against his cock. "I'm rock hard right now," he muttered. "I want to push you down onto the ground and f*ck you so hard that you'll forget that you met me only two days ago."

I swallowed hard as my palm pressed against him. I could tell that he wasn't lying. He was hard and thick against my hands, and it took everything in me to not grab him and squeeze him between my fingers.

For more information on this steamy romance, visit XOXO After Dark.

Sex
I Lost My Mom 2 Years Ago, and My Grief Killed My Sex Drive
by Adele Stewart 1 day ago