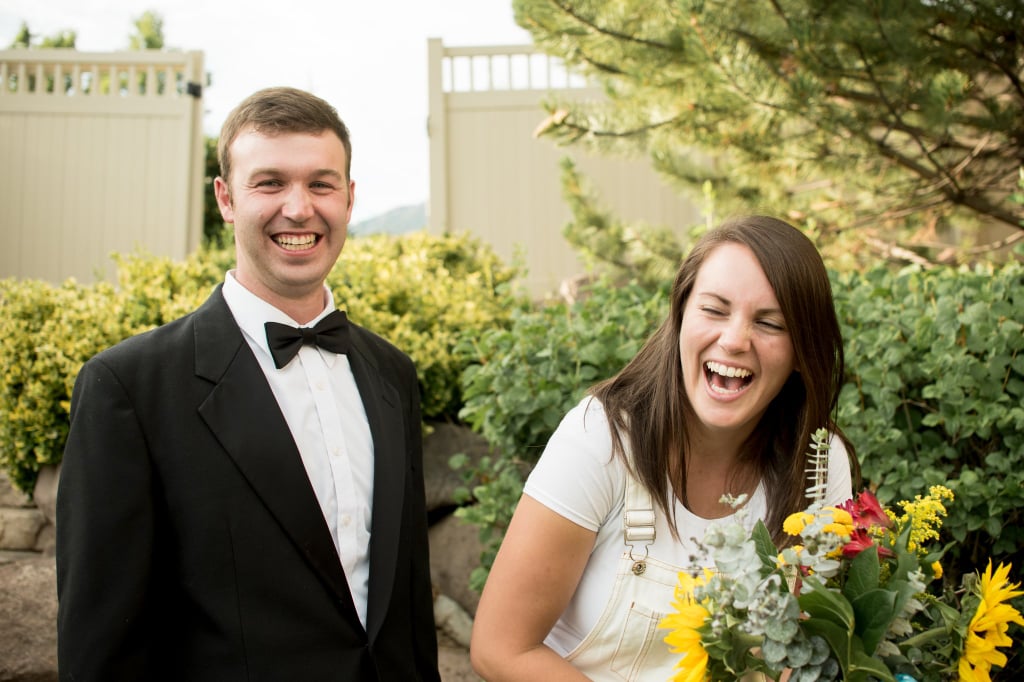 My story starts and ends on July 25. The only catch is that it's a span of two years.

Andrew and I got married on July 25, 2015. We had been dating about a year when we decided we wanted to tie the knot and had everything planned perfectly for the big day.

Truly, the day ran as smoothly as it possibly could've. It was easily the best and most fun day of my life. The ceremony was flawless, and we partied all night at the reception. Even my dad was busting moves on the dance floor.

Fast-forward 18 months. I delayed getting my name legally changed because it was such a freakin' pain. I feel like it should just automatically happen once you're married — no waiting in line at the DMV, no passport renewing, no hassle. That's a tangent for a different day.

Anyway, I'd finally had enough of having some things with my new last name and others with my old last name. It was time to go through the painful trudge of US bureaucracy. I started with my Social Security card, which was surprisingly quick and painless. Next was making an appointment at the DMV. I brought all the same documents to my appointment, feeling confident that this would be it. Boy, was I so wrong.

The lady takes my (well-organized) file of documents and asks where my marriage certificate is. I point to one of the papers and say, "Right there."

"Nope, that's the marriage application, not the certificate. You'll need to mail away for a certified copy of it and come back."

Of course. It's only $15 to get a copy, so I wasn't too stressed about it. A few weeks after I sent away for it, I got a letter back from the state of California saying that my records did not exist and/or could not be located.

"That's strange," I think to myself. I ask Andrew about it and he has no clue what it could mean. I call the Recorder's Office in both LA and Ventura County to see if my records could be there. Neither of them have it. Panic sets in.

They recommend I call the people who married us to see if maybe they have it for some reason. So I do, but to no avail. They have a record that we got married, but not the certificate. Apparently the completed application never made it back to the Recorder's Office.

Panic sets in even more.

I call the Recorder's Office back (P.S., Ventura is SO much easier to reach than LA if you have the choice), and I tell her my situation. She says since it's been over a year, I'll just need to come in and file a form requesting it to be sent out again. I tell her that I unfortunately can't come in because I live in Utah now.

Because I am now a resident of Utah, they cannot issue me this form — I'd have to get a court order from Utah. WHAT? JUST GIVE ME MY CERTIFICATE.

Then the question enters my mind: "If there's no state record of our marriage, are we even married?" So I call back really quick and ask. The lady laughs and goes, "Well, I guess not! There's no record of it happening, so no."

What does this mean? Is my whole marriage a lie?!

Will Andrew even want to marry me again? We built a house together! He HAS to marry me! Am I going to wear a scarlet A forever?

Of course, none of this is rational, but I never said I was rational.

I call the Recorder's Office in Utah, the State Court, and three other random organizations, trying to figure out what to do. No one I talk to understands what a court ordered certificate is (because, as I come to find out, only some states do it). On top of that, they all keep telling me that it's California's issue to resolve, not theirs. So back and forth I go a couple of times, getting frustrated that all this hullabaloo is over a piece of paper.

I finally talk to one lady in Utah who advises that I file for some type of form that would get it finalized . . . for upwards of $500. I am cheap. I don't like this idea.

Then she said something that changed the game.

"If you're not recorded as married, why don't you just get remarried? It would be hundreds of dollars cheaper. And, frankly, way more fun!"

I sit there for a second thinking about this option. Why didn't I think of this? Is that even legal? What are the repercussions that might come of this?

I finally agree that's not a bad idea and even get kind of excited about it.

My mother-in-law (or should I say my "supposed mother-in-law") tells me that she has a family-law attorney friend I could consult for free. I give him a call and explain my situation, and he immediately says, "Get remarried. It's way easier and way less expensive." I double- and triple-check there won't be some weird repercussions of getting married twice, and he assures me we'll be fine.

As a side note, it's a habit in my life to have the ridiculous happen to me — things that people go, "This would only happen to you." I was well aware that this would be one of them once I told people.

Andrew and I talked it over and decided to get (re)married. Many advised us to just go to a courthouse and make it quick. We didn't take that advice. If we were going to get married again, it was going to be a party and poking fun at this bureaucratic failure.

In a way, it was a huge blessing that I found out when I did. We would need to have a new wedding date (legally), and we'd be able to get remarried on July 25, 2017. Pretty cool second anniversary, right?

We decided we needed to just have the wedding we would've had if we could make it as big of a silly event as possible. We decided to get cookies and ice cream catered, we sent out ridiculous invitations that I made on Word, and, best of all, we got Andrew's brother, Todd, to get ordained online and be our minister.

Even better? I texted our original wedding photographer, Laura, to see if she'd be willing to do a 30-minute second wedding shoot. Of course, this got 100 questions. After laughing about it and fully believing me, she was all in.

Andrew asked what he should wear, and I told him whatever he wanted. His eyes lit up like a kid being told he can get three scoops of ice cream, and he said, "I'm wearing my tux top with board shorts." I loved it, and that was that.

I found some white overalls by chance while shopping and knew that's what I'd be wearing. If I could fit a basketball in them, even better. Unfortunately, I couldn't, but I was still going to wear them.

We set up chairs, a microphone, and a speaker; had our friends and family come; and gave everyone popcorn for the ceremony because, really, it was like watching a ridiculous rom-com.

Father Todd prepared a hilarious speech that had everyone rolling with laughter, and he even had a fake book to publicize. For his first wedding, I'm going to say that he crushed it.

Andrew and I said our "I dos," and we had our second wedding kiss. Everyone threw their popcorn, music played, we danced, we ate, and then we swam all night with friends.

It was the best way I could've imagined to celebrate our second anniversary.

We still like to joke, "I'm so glad we got married — my first wife was such a jerk" or "My ex-husband was such a tool." We even like to bring it up at random that our second marriage was so fun, just to see the look on people's faces.

While the whole ordeal was originally a pain in the butt and had me on the verge of getting a stomach ulcer, it was one of the funniest moments of my life to get remarried.

Don't worry — we immediately filed for our marriage certificate and got it within the week. We're legal now!

If you want to learn anything from my story, don't procrastinate changing your last name, and if you do . . . just roll with the punches. It'll be an adventure if you take it in stride.