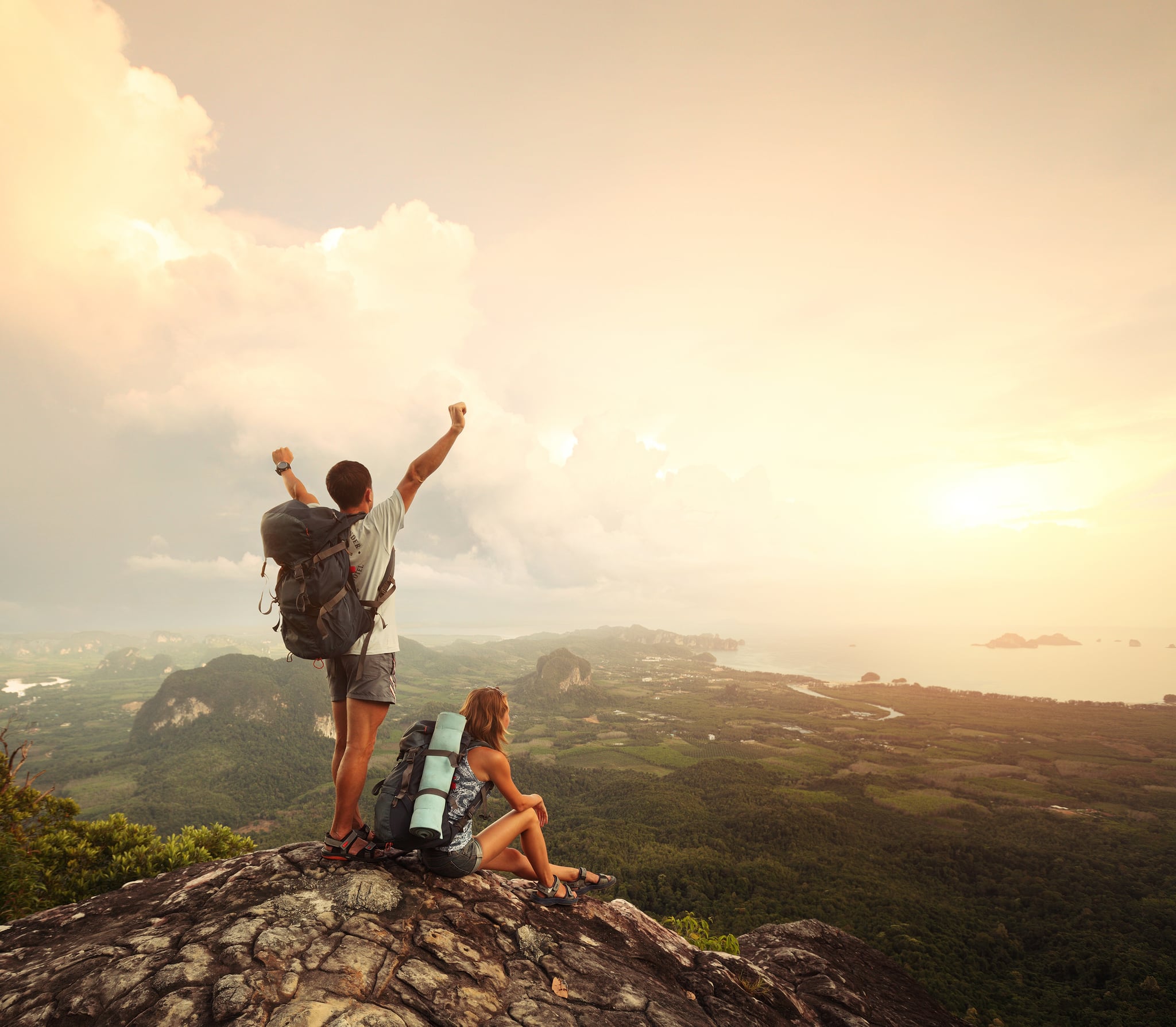 A new hobby can spell disaster for any relationship. Best-case scenario, we worry it's a sign that a deep boredom, or psychological sea change, is occurring in our significant other, one we are powerless to stop. At worst, it's a symptom that such a shift has occurred and is already being manifested. Most likely in someone else's bed.

So, yes, when my boyfriend took up mountaineering, I worried a little. The last time someone I dated had suddenly and devotedly pursued a new obsession — playing in a local soccer league — it just so happened to conveniently dovetail with another new obsession, that one in the form of a German exchange student. There is a whole world out there, and if we're honest with ourselves, we really only want the person we love to be exposed to just enough of it that they don't discover they have other options.

My boyfriend and I met 12 years ago in our shared hometown of Boise, ID, during a Summer break. I was headed to college in Portland, OR. He was already going to film school in LA. On our first blind coffee date, we talked about punk rock and political ideas we had no right to have at that age and places we wanted to go and the people we wanted to be someday. I was enamored with the expansiveness he wanted in his life, mostly because I wanted it in my own.

I wasn't surprised a couple of years ago when he decided to climb Mount Baldy — which is just an hour-and-a-half drive from our house — and I definitely wasn't concerned. The mountain is not that treacherous; making it up and back down the 3,900-foot elevation takes only six or seven hours, the conditions are usually mild, and nothing about it really requires any special skill or expensive gear or real know-how.

But it turns out I really don't like climbing mountains. After 15 minutes, my breath was proving hard to draw in the thinned-out, high-up air as I mindlessly trudged on behind him like a Sisyphus in stretch pants. We spotted a shy, white-speckled little deer peeking out from behind the pines, but even that wasn't enough to enchant me with the process. An hour in, and I was suffering from a boredom so intense it felt radioactive, all in the name of making it to the top of a rock.

Martin Instagrammed a picture of me there to commemorate the accomplishment. In it, I look so miserable — my hair blowing like a rogue tumbleweed in the wind, the sleeves of my hoodie crumpled up in my cold fingers, a vacant, imitation smile crossing my face — that our friends still laugh about it.

He was mystified by my lack of enthusiasm. "Isn't it beautiful up here?"

"Sure. I just think conquering a mountain is probably much more meaningful to people who happen to have penises," I only sort-of joked.

Unfortunately, Martin's interest in scaling extremely tall bits of rock was just beginning. He started enlisting his friends, men who had otherwise shown little interest in pursuits beyond noir cinema and tracking down the city's best taco trucks, to take part in his weekend excursions. He showed an alarming pride in the garish suntan lines that formed where the arm of his sunglasses shielded his temples. He wrangled me into watching excruciating documentaries about people attempting to summit Everest, often losing fingers, toes, or other important bodily appendages in the process. Then he told me he was thinking about taking a three-day trip to Mount Rainier the next Summer. I asked if it was safe.

Scott and Sara were longtime friends (a web developer and emergency-room doctor, respectively) and the kind of people who always seemed to be having some kind of meaningful and memorable life adventure despite those demanding and accomplished careers. The last time we'd seen them, we'd stayed at their rental house in Costa Rica, where they spent a long Summer taking Spanish lessons, eating cheap lobster, and learning how to surf. We were there for five days, which says much about the distance between our approach to life and theirs.

It went without saying that I would not be joining. That July, I followed Martin, Scott, and Sara's journey via their intermittent Facebook photos, all white-capped mountains and triumphant smiles poking out of parkas and sunrises over the craggy high points of the planet. It looked beautiful, but I had no sense of missing out.

Martin returned completely decimated. His face was sun and windburned, his legs were cramped and aching, he was disinterested in food after being sickened by the inhumane altitude, and his epic case of dehydration made him our local Trader Joe's chief source of coconut-water revenue for at least a week.

I felt a spike of resentment. After so many years together, he had a major life experience that I realistically could have participated in, one he'd found deeply moving and one that was now detrimental to our having any real fun together for many days in its wake. I also imagined a strange, inexplicable distance open like a crevasse between us. While he was peering out from the mountaintops, I had marooned myself at sea level. Now that he'd seen the world from a different vantage point, could we still share the same view? Still, I couldn't stop bragging about his accomplishment to everyone I knew. I went to sleep at night marveling at this person next to me, at the thought that I could discover something new about someone whose terrain I thought I had completely covered.

A year later, Martin made his second trip to Mount Whitney with a friend. He sent me a text from the top of the mountain — or near the top of the mountain, that is. They were tired, thirsty, and going to turn back. He expected they'd be at their campsite in two hours or so, around 4 p.m. It was a Sunday. I stayed home on the couch reading. At 7:30, the sun started to sink and so did my stomach. I looked up the number for the local sheriff's office. A deputy picked up. I bashfully explained that I expected to hear from my boyfriend hours ago and was starting to worry.

"It'll definitely take 'em more than a few hours to get down, even if they didn't quite summit," he laughed. He sounded so much like the cartoon version of a small-town cop that I imagined him leaning back, muddy boots on desk, lifting a chipped coffee mug to his mouth. "There's not much we can do tonight, but if you haven't heard from them by the morning, give us a call. But, Miss? I wouldn't worry."

I thanked him for making me feel better. An hour later, my phone rang. It was Martin.

"Your hobbies are going to shave several years off of my life," I said instead of "hello." I meant it, but after I calmed down and he apologized and explained he was not only alive but relatively well and started to recount the day's adventures, my sense of pride eclipsed the wave of fear. Even if it meant I would live to 80 years old instead of 90, I would never ask him to stop climbing. How could I?

A few days later, Martin emailed me a quote from writer and climber René Daumal's novel Mount Analogue. I think it was his attempt to explain his new need to me in a form I might understand: words in a book. "You cannot always stay on the summits, " Daumal wrote. "You have to come down again . . . So what's the point? Only this: what is above knows what is below, what is below does not know what is above."

I reread — and have reread — that quote so many times since that day. In it, I found the words to reconcile the distance between our life together and our separate selves. That same urge that drives Martin to climb is the one that attracted me to him in the first place. It's the desire we had for something greater than what our small suburban lives had presented us with. It's the same desire that makes me write, risking embarrassment and rejection and failure in search of something I won't even recognize until I get to it. Our explorations might take us away from each other in our separate moments of striving, but our efforts upward and toward haven't really been separate journeys since that first coffee date.

Daumal was right. We can't always stay on the mountaintop. Life is made up of what is above and what is below and all the murky places we discover in between. It's made up of moments spent cheering on the person we love as they make their ascent and hope that, when they reach their own private summit, we're a thing worth climbing back down toward.