We've seen abortion in TV and movies, but we've never seen it portrayed like it is in Obvious Child: that is to say, normal. Jenny Slate stars in the film that's being called the first-ever "abortion rom-com." But how accurate is its portrayal? And why does it matter? Dawn Laguens, executive vice president and CXO for Planned Parenthood, weighs in on the film and onscreen abortion in the following op-ed piece. 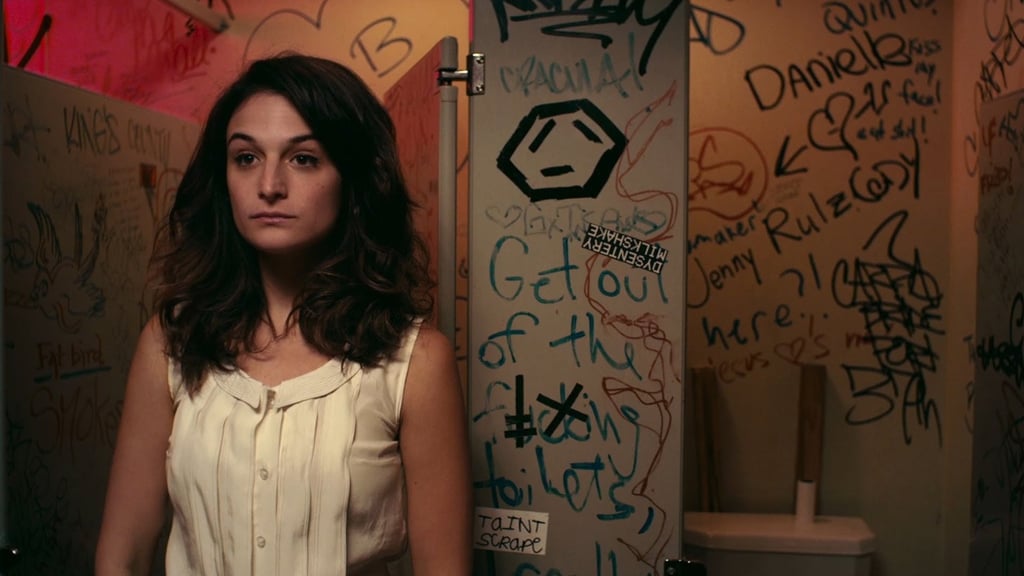 I've never pitched a movie script to Hollywood executives, but I imagine that putting "romantic comedy" and "abortion" in the same sentence usually goes over about as well as pitching a horror movie about the Smurfs or a sequel to Gigli.

So points to the makers of the new film Obvious Child for what must have been a truly gutsy pitch. And even more points for — finally! — making a full-fledged Summer rom-com where a woman has an abortion and doesn't immediately burst into flames.

Abortion is one of the most common medical procedures in America. But in Hollywood's imagination, it seems to happen less often than awakening from a coma just in time to stop your ex's wedding (I mean, who among us hasn't been in THAT situation, right?).

Even worse, a woman who decides to end an unintended pregnancy in film or TV looks nothing like a woman making that decision in real life. She's often crazy or promiscuous, usually lonely and ashamed, and always judged severely by the people around her. Invariably, she has a sudden change of heart (for reasons that are never really explained). And, all too often, she's killed off before the credits roll.

I know Hollywood isn't known for adhering strictly to reality (although I will never stop believing that Jake Ryan really did fall in love with Sam in Sixteen Candles). But in real life, women who make that difficult choice are usually women like Donna Stern, the protagonist of Obvious Child.

Make no mistake: the abortion is central to the film — it isn't incidental, and it isn't the one serious scene sandwiched between laughs. But Obvious Child isn't only a movie about a woman who gets an abortion. It's also about her life, her job, and her hilarious relationships with family, friends, and co-workers. It doesn't have a political agenda. It doesn't leave the viewer with serious and sternly delivered lessons.

One of the movie's strengths is that it eschews the "pro-choice" and "pro-life" labels. These labels have been useful in the past, but at Planned Parenthood, we have found that they do not reflect the conversation happening in America today. Research shows that most people have complex feelings about abortion. Tellingly, the number of people who say abortion should remain safe and legal is higher than the number who identify as "pro-choice." Therefore, at Planned Parenthood, we avoid placing people in one category or another. Likewise, Obvious Child recognizes that women have their own reasons for their decisions about whether or when to have children and that those decisions may not fit neatly into any box or label.

It's just an adorable, funny movie about a woman taking charge of her own future and her own destiny — and, as part of that, making her own decisions about whether and when to have children.

For more than a year, Planned Parenthood had consulted closely on the development and production of Obvious Child, because after decades of watching female characters horrify their friends and ruin their lives by undergoing a common and safe medical procedure, we and the film's writer/director thought it was time for a movie that got abortion right.

I was lucky enough to attend the film's premiere at the Sundance Film Festival in January, and while everyone involved knew it was something totally different and truly special, none of us knew how the film would be received.

But get this: as it turns out, people like movies where characters behave like real people. Obvious Child sold almost immediately. The "abortion rom-com" became the hot new thing. And that's cause for celebration.

No movie can change the debate overnight. And it's not fair to Obvious Child to expect it to be a perfect distillation of every issue women like Donna face.

But this can be a major turning point in how women's sexuality, pregnancy, and abortion are portrayed — and since young women in particular look to film and TV for cues about their own health, they may finally be able to get the right message, instead of being told over and over again that only "messed-up" girls exercise their right to end a pregnancy.

The best way to bring that stigma into the light, expose it, and reject it is to send young women a different message. And Obvious Child can be the beginning of that process.

What's next? Well, what would Donna's journey have been like if she were a woman of color who faced added layers of stigma when she decided to end her pregnancy? What if Donna were poor, and her abortion wasn't covered by federal assistance programs when other medical procedures are? What if she lived in Mississippi and had to drive hundreds of miles to get an abortion because her elected representatives had all but banned it?

Those may not sound like ideal movie pitches. But they are the reality for many, many women in America. And when it comes to abortion, it's time we saw some more reality on the big screen. Obvious Child proves that Hollywood can do it — and that a "romantic comedy" where a main character has a safe and legal "abortion" doesn't comprise such a strange pitch after all.