In Searching For Beautiful, the next heartwarming, sexy installment in New York Times bestselling author Jennifer Probst's Searching For series, Genevieve MacKenzie runs away on the day of her picture-perfect wedding to her picture-perfect fiancé — and straight to her longtime BFF, Wolfe, who promises to keep her out of the public eye until she can decide what her future holds. But what if everything Gen's ever wanted has actually been right in front of her all along? 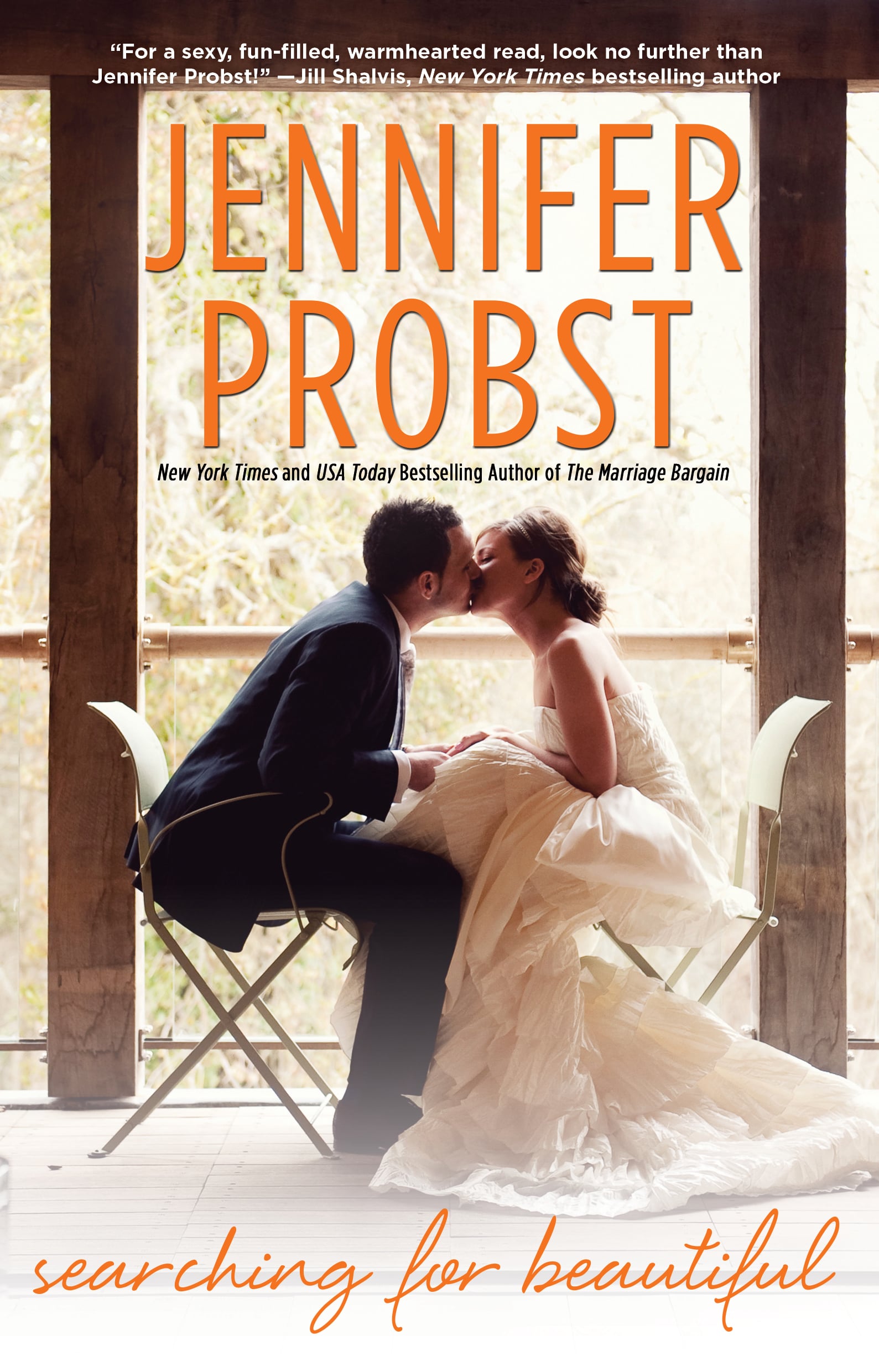 Suddenly, he loomed over her, pressing her back into the ground, his hips cradling hers. Oh wow. His body heat scorched through her wet clothes and her bare legs automatically opened in a primeval urge to surrender. He planted both hands on either side of her head and lowered his mouth. What was he doing? His delicious scent rose to her nostrils, and her hands found their way to grip his hips, his damp skin sleek and muscled beneath her touch.

Another curse escaped. He seemed grumpy and torn as he stared at her, inches away from her mouth, and Gen blinked a few times because his head kind of floated around, and her body screamed for more contact, please, just a bit more, and then he muttered, "I'm gonna prove you're good at this kissing thing, okay?" and his mouth took hers.

She whimpered, literally whimpered, at the amazing feel of those ultrasoft, smooth lips coasting over hers with an expert grace and blistering heat that made her toes curl. Oh, alcoholic visions were so yummy! Wolfe, her best friend and confidant, was kissing her, and it was too good to be real, so it had to be some sort of psychedelic mirage from too much Sam Adams.

Her mind spun, tried to make sense of it, and gave up.

Hips arched, nails digging into his lower back, she surrendered to the sensations rocketing in her core and spreading like fire through her veins. He kissed her for a while, until she was a soft, gooey mess beneath him, and then his tongue parted her lips and surged in.

She opened her mouth and met him halfway, crazed for the full taste and essence of him. His tongue pushed, stroked, and explored, taking her deep. She moaned and reached for more. God, she wanted more, the taste of citrusy lemon and male hunger pulling her under. He grew hard between her thighs and she nipped at his bottom lip, sucking gently, and he muttered something foul, deflowering her mouth like she was a virgin asking to be ravished and taken and f*cked.

Time stood still. It was too short, it was endless, it was everything. Her head spun, her breasts grew achy and tight, and she was so wet he could've slipped between her thighs and slid home without a protest. She made a sound deep in her throat when he slowly pulled away, the wet slide of his tongue over hers bestowing one final taste.

"That Brazilian is the sexiest gift a man can ask for, sweetheart." He knelt between her thighs and blew hot breath over the swollen folds. She jerked and moaned, her fingers clutching the sheets. Yeah, she was beyond primed. Once she lost her ability to yell at him or demand, she was caught in her body's grip. Just like he wanted. Her clit was so tight and hard, one good flick of his tongue would make her come again, but he wanted her crazed first, the sound of his name breaking from her lips.

Swiping her slit slow and easy, he tasted, teased, sipped like she was fine champagne and he intended to make the drink last. His arms pinned her flailing body down with an iron strength, never rushing his pace, her cries filling the air with a desperate hunger that would haunt his dreams. Wolfe inhaled her musky scent, licking the hard nub, and pushed his thumb in and out of her soaking channel. Her p*ssy clamped down hard and tried to suck him deeper, but he teased until she was a thrashing, senseless being held on the edge.

"No more," she gasped, her blue eyes fierce and past sanity. "D*mn you, Wolfe, make me come before I kill you."

With a low chuckle, he took her clit between his lips and sucked. Hard. Harder. Pinned three fingers together and plunged in deep.

She came again, and he drank it all, never stopping the suction motions so she fell into another orgasm so beautifully he wondered if he'd ever allow her out of bed again. She clung to him with a sweet desperation he couldn't refuse. Sliding up her body, kissing every inch of her skin, he paused again at her mouth, nibbling at her lips, cradling her face in his hands as he adored her.

"Son of a b*tch," she said, her voice a thin whisper of sound. "You're killing me. Still need more."

"Me, too." He kissed her long and deep. "See how good you taste on me? I can't get enough. I'll never get enough."

Get Searching For Beautiful here, and check out more great content on XOXO After Dark:

Books
Make Room in Your TBR Pile, Because These 25 Books Coming Out in June Deserve a Spot
by Sabienna Bowman 14 hours ago