What Happens Under the Mistletoe is a sizzling holiday story set in Regency England. The festive spirit of the season threatens to sweep feisty heroine Georgie Trent beneath the mistletoe — and back into the arms of Lucas Godwin, the dashing rogue whose carelessness soiled her reputation and sent her into exile in London.

Will she be able to resist his charm? 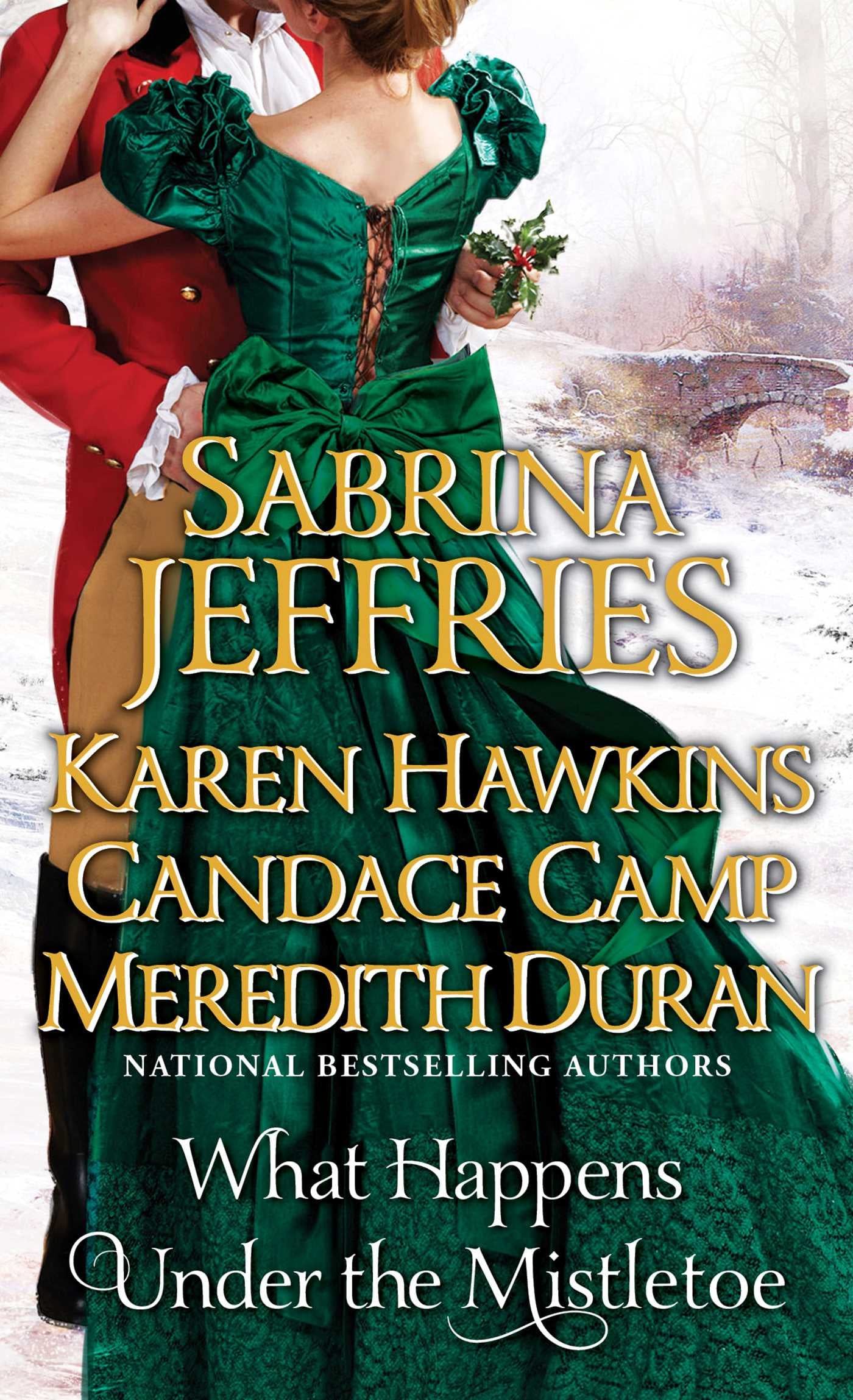 "Are you mad?" He cupped her cheeks, swept her hair back from her eyes. "I could use ten thousand words to describe you — but never, even at my most disillusioned, would plain and ordinary have numbered among them. You are . . ." He shook his head as he gazed at her. "Georgie, you are a miracle. Clever without cruelty, kind without naïveté, beautiful without flaw. And I prayed nightly that you would be my miracle . . . and I felt, even at the height of my bitterness, that the outcome had only been just, after all — for your father was right. I had overreached greatly when I asked for your hand. Any man would have overreached, had you been his aim."

Amazement washed through her. "I don't . . . You never . . ." He made some strained noise. "I never did many things," he said roughly. He caught her elbows, pulled her to her feet. "Many things I should have done the first moment I had a chance at them." His hands framed her face. "Like this."

He kissed her then, opening her mouth with his own, brooking no hesitation. His kiss was so bold — so commanding and instantaneously consuming — that it gave her brain no footing to protest.

Nor did she wish to. Gladly, hungrily, she kissed him back. Two years — two years of sleepless nights, of a pulsing aching want that had seemed destined to go unfulfilled — this ferocity she felt was only natural; it was inevitable. She cupped his face in her hands, greedy for the hot, fine-grained texture of his skin; the slight scratch of his oncoming beard; the elegant angles of his cheekbones. She slid her hands through the thick silk of his night-dark hair, tightened her grip until it must have hurt him — but he only kissed her more fiercely yet, encouraging her with lips and tongue and teeth, his hot, clever mouth.

He lifted her into his arms and carried her over to the table. Very gently he laid her down atop it, amidst the lingering fragrance of ginger. He came over her, worshiping her lips, her cheeks, and her throat with his mouth.

But it wasn't enough. She tugged at his hair, his shoulders, to pull him against her. His weight was heavy and sweet. She pushed her face into his throat and breathed deeply of him. That dark, masculine scent sank straight into her, plummeted deep into her bones and belly. It struck up a more primal hunger than she had ever known in her dreams.

They lay down together, still kissing; kissing for long minutes in which time lost its hold on them. But at last he pulled away, going up on one elbow to look at her. The dim light revealed only a faint impression of his body, but the growl he made suggested that his eyes were better than hers. He touched her breast very lightly, with the back of his hand, and she shivered.

"You like that," he said, very low. He bent down and kissed her nipple, causing her to gasp; but before he could mistake that noise for one of protest, she threaded her hands through his hair to hold him where he was.

His lips curved against her breast. He opened his mouth and touched his tongue to her nipple, and she groaned.

"Oh, yes," he murmured, and closed his lips around her again, suckling now, with strong pulling movements that made her feel faint — and ferocious — and deliciously weak. His hand slid into her hair, cradled her skull as though he sensed that she required the support, as he laved her breast more intently yet.

Her dreams could not compare. Here was what she'd craved, those many nights of frustration — or so she thought, until his hand smoothed down her belly, brushed lightly over the tops of her thighs, then delved between, finding a spot so sensitive that she gasped.

"Wait," she said. It was too much — perhaps there was something wrong with her — but the insistent stroke of his hand, paired with the tugging assault of his mouth, caused something to twist tightly, low in her belly; to coil and build, an unbearable aching weight. "I don't think — "

"You do," he said, and stroked her more quickly, until suddenly — the coil burst. Pleasure jerked through her, took control of her hips; she bucked against him as he murmured to her, low soothing words that she barely understood; but the heat of his breath against her skin as he spoke seemed to heighten the pleasure further yet, until she turned her face into his shoulder to muffle her own moan.

His hand found her face. Smoothed back her hair. "Is that what you'd imagined?" he asked roughly. "For God knows . . . if so, we shared the same dream."

She felt too shy to reply, at first. How odd, that one could feel shy when lying naked, pressed against a man, her face buried in the aphrodisiac scent of his damp throat.

But after a moment, the question nudged her, and she frowned a little. "There was more to it."

He levered himself off her, his face a blur in the darkness, but she had the sense that he was smiling at her, smiling in that dark, provocative way he sometimes had.

"Is that so? What else was there?"

His voice was a purr, stoking her most secret, brazen inclinations. On a deep breath for courage, she slid her hand down his body, until she found the firm length of his erection. "This," she whispered.

Get What Happens Under the Mistletoe, and check out more great content on XOXO After Dark:

Books
If You Loved Amanda Gorman's Inaugural Poem, You Can Preorder Her First Children's Book
by Kate Schweitzer 3 days ago