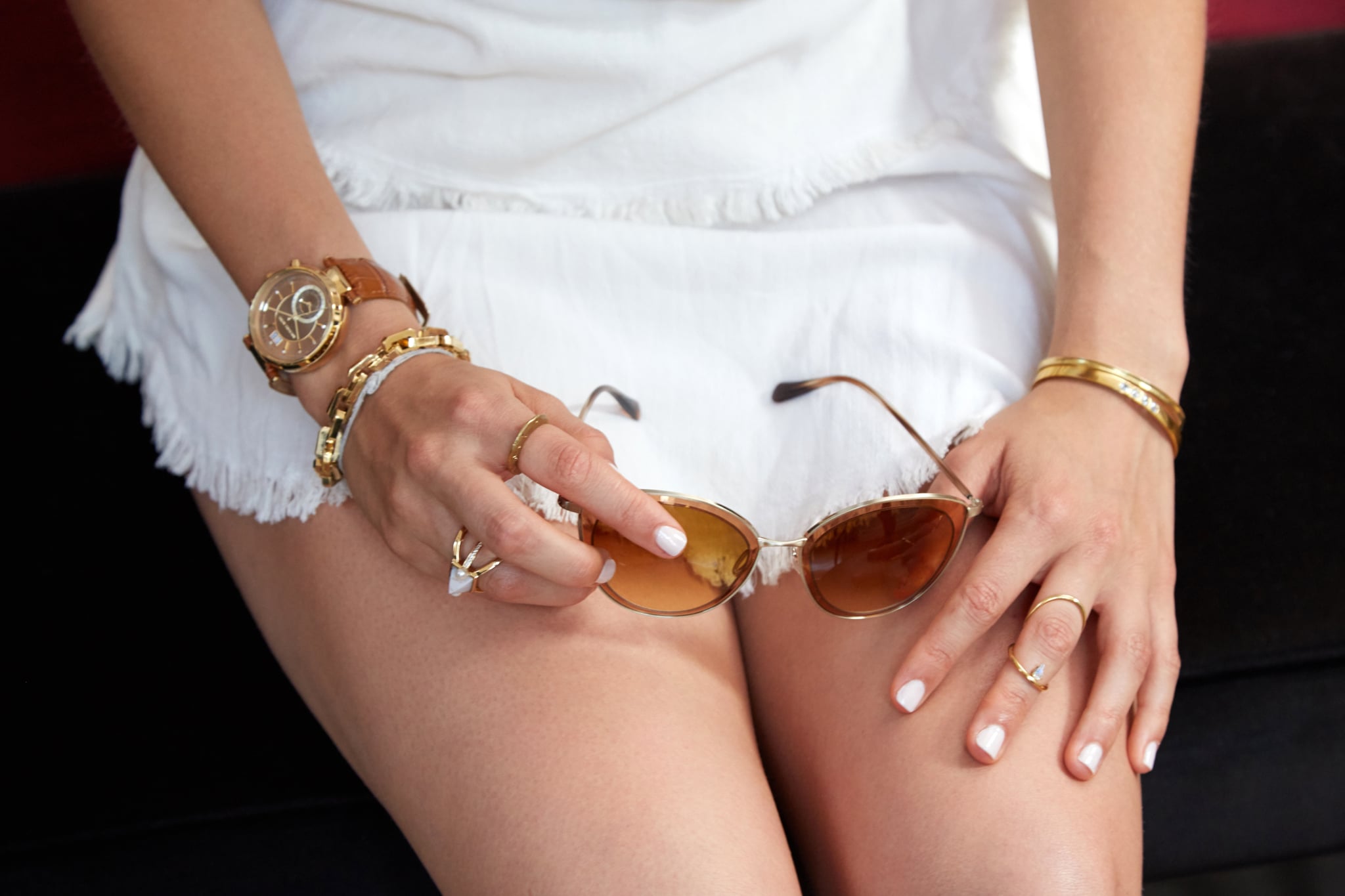 I thought I was walking out of the doctor's office after getting my first IUD but rejected that option on account of my legs not working afterward. In a haze of cramps and irrational "is someone stabbing my uterus" thoughts, I also contemplated crawling out. Lying for an extended period of time on the doctor's table writhing in pain and popping Advil until I could semifunction long enough to drag myself to a cab is the option I ultimately decided on. I was down a day, solid, afterward. From someone with a high tolerance for pain and a strong(ish) stomach for medical stuff, I knew I wasn't exaggerating after the insertion of the tiny device, but it came as a surprise nonetheless. Six pregnancy-and-period-free years and a second IUD later, I'd do it all again in a heartbeat.

Like with all forms of birth control, IUDs have their pluses and minuses, but for me, the benefits — peace of mind, cessation of periods, and . . . the whole not getting pregnant thing — far outweigh the drawbacks. There's a reason long-acting birth control like IUDs are majorly on the rise; intrauterine devices are easily reversible, effective, safe, easy to maintain, and long-lasting. Everyone's experiences with IUDs differ, obviously, but more and more people are jumping on the bandwagon and singing their praises — myself, despite my mildly traumatic experience, included. Here are some basic things anyone considering getting one should know before you do.

There are several kinds of IUDs, so make sure you're getting the right one for you.

I was diagnosed with high blood pressure right around my 20th birthday (yeah, I know, happy birthday to me), so my birth control options were pretty limited since doctors basically laughed in my face when I suggested any method with hormones — like most pills, patches, and shots — that could put me at risk for increased blood pressure, blood clots, and strokes. Your IUD options are a nonhormonal one containing copper, like ParaGard, or ones with levonorgestrel, a progestin hormone (only a small amount reaches the bloodstream and therefore does not have the same effect as those in many other birth control methods), like Mirena or Skyla.

They do not prevent STIs.

If you have a sexually transmitted infection (STI), your partner has an STI, or you do not know the STI status of a partner, then condoms are still an effective method of preventing the spread of any infection. Like with the pill and other nonbarrier methods, IUDs will not prevent infection from passing from person to person.

It is one of the most effective forms of birth control out there.

Because other birth control methods have a lot more room for "user error" since it's up to us fallible humans to ensure the correct usage of them, Mirena is one of the most effective ways of preventing unwanted pregnancy; you can't forget to take it, and the odds of it coming out are low (but still exist). ParaGard is more than 99 percent effective in preventing pregnancy as well and can act as an emergency contraceptive if taken within five days of having unprotected sex.

They last for years.

A huge benefit of getting an IUD is that they last for years, meaning theoretically your contraceptive needs are taken care of for three years (Skyla), five (Mirena), or 10 (ParaGard). For me, this has been such a luxury. Having an IUD allows you invaluable peace of mind that, arguably, you can't get with any other form of birth control — at least on the same level. With an IUD, there's no setting an alarm to remind you to take it, no panic about whether or not you forgot it, no shot every few months, no patch, no nothing. It's in there, and for the most part, it's there to stay until you're ready to get it out.

It can hurt to get one in. Like, bad.

How a tiny T-shaped piece of plastic, which promised me so many great things, could betray me so much was beyond me. I went in having done some (but not much) research on what to expect pain-wise. To all the women out there who say getting an IUD was a breeze — I'M REALLY HAPPY FOR YOU. In reality, the experience varies greatly for each person. I've heard some women say it was uncomfortable but tolerable, some who experienced little to no pain at all, and others who've had kids who liken the insertion of their IUD to childbirth. Let me repeat — people who've had actual human beings emerge from their bodies still consider getting an IUD to be up there in pain levels.

The process, thank god, is a short one. Barring issues with the insertion, it only takes about 15-20 minutes to get the device in and settled.

They are now covered under many health insurance plans (but can be pricey if they aren't).

The cost of an IUD can really vary greatly — from $0 out of pocket to $1,000, depending on if you have health insurance and what type you have. The good news is that they are covered under Obama's Affordable Care Act, and nowadays many providers require full coverage of many birth control methods, including copay for the appointment. Liletta is also a low-cost IUD option that lasts for up to three years. Six years ago, I paid several hundred dollars for the procedure, but when I went back this year to get a new one, I paid nothing — not even a copay.

In many cases your period is lighter or even ceases to occur at all.

So, imagine never thinking about your period apart from the occasional cramp or change in mood once a month, but with little or no actual bleeding. For five years. I rarely buy tampons (think of how much money you're saving right there) and just keep a few on hand for when I have light breakthrough days periodically. I do still experience pretty solid PMS, which can be confusing because without an actual period to accompany my major mood swings, it can take me a day or so to figure out what the source of my sadness or irritation is. Once I place it, though, I'm basically like, "Oh, right . . . "

Not having a period, or rarely having one, is a VERY nice added bonus to having an IUD. Again, the experience can vary widely — some women actually experience heavier periods, particularly with ParaGard — so getting an IUD isn't a guarantee that your period will stop or significantly change, but it is definitely a common result of having one.

Getting it out can hurt pretty much as bad as getting it in.

I put off getting my Mirena IUD changed once I hit the five-year mark mainly because of my first experience with getting it in. My doctor told me that five years wasn't a hard-and-fast rule anymore (depending on the type of IUD), so I waited an extra six months before finally scheduling the appointment to get the one I had removed and replaced. Admittedly I was extremely nervous, and in my personal experience both times I was not offered any kind of painkillers apart from over-the-counter relief like Advil or Tylenol.

This time around, I was given a heating pad and a numbing shot (which also hurts), but my cervix was SUPER unhappy with getting the IUD removed then having a new one jammed back up there right after. Basically everything inside of you that you deem most precious seizes up in anger and dismay, so it kind of feels like a sharp fist made of knives is bunching up and releasing repeatedly inside of you. The heating pad helped, though? I will say the discomfort went away much, much quicker the second time around, so I wasn't down for the count afterward the way I was before, most likely because my body was already accustomed to having the device inside.

It's been great for my sex life.

Before I got an IUD, I had been previously taking a hormonal birth control pill, which (among other side effects) lowered my sex drive. For the past four years, I have been in a monogamous relationship with a cisgender male, and the combination of responsible, no-barrier (meaning no condom in our case) sex as well as estrogen-free hormonal birth control has optimized the experience for us.

Everyone's different. I know some women who literally can't stop raving about their IUD and others who had pretty traumatic experiences with them, both getting them in and also postinsertion. For me, the benefits have FAR outweighed the initial pain of getting it. I sleep (and sleep with my partner) easier with the near certainty that unwanted pregnancy will be prevented. Plus, better sex, no periods, and basically not a thought about it for five years? Toss me a heating pad and some Advil, and I'll be hopping back up on the table willingly until I'm ready to start popping out babies.

by Izzie Deibe 52 minutes ago